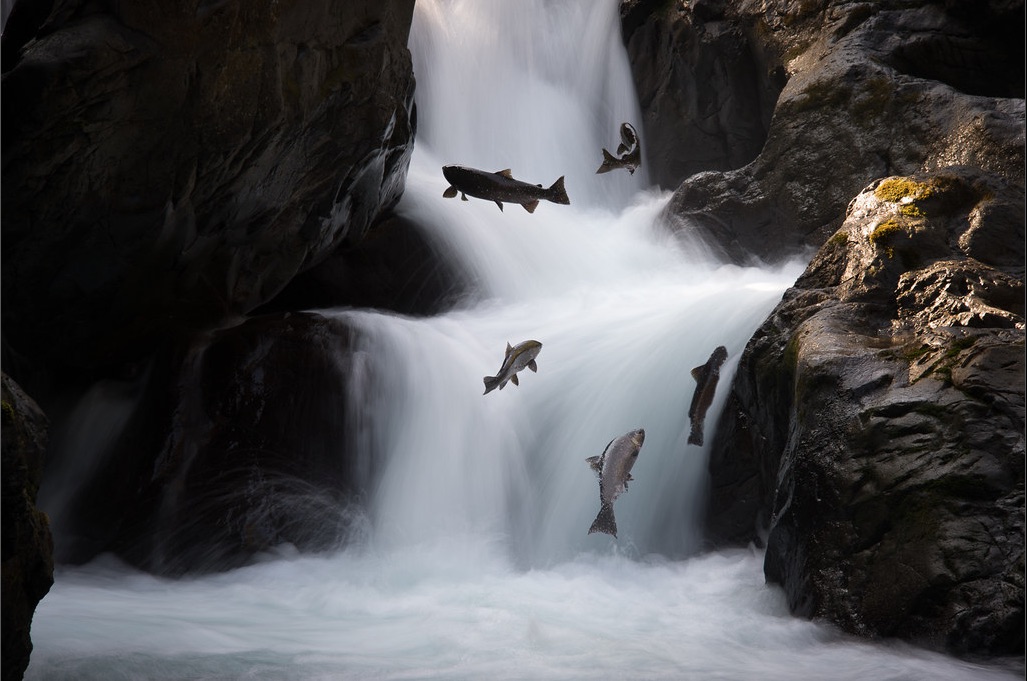 Reporter’s notebook: Salmon have been endangered my entire life. Here’s what I didn’t realize until I started reporting.

Leavenworth is a charming tourist town, tucked in Washington’s North Cascades mountains and styled as a Bavarian village. I spent a weekend there, noodling around in souvenir shops, snacking on pretzels and soaking in faux-European culture. It wasn’t till after dark, when I headed to the banks of Icicle Creek just outside of town for an interview, that I saw a vestige of what the region once was.

Perched on a plywood scaffold over roaring waters, a Wenatchi father and son fished using long nets made by hand and under the cover of darkness so it was harder for salmon to spot them.

Only a handful of their tribe still fish this way. Dams through the region’s system of rivers have electrified cities, irrigated crops and powered industry. But those dams also decimated salmon numbers and wiped out fishing grounds that were central to tribes’ ways of life.

“My people have had to sacrifice a lot of these things so everybody else can have that,” Jason Whalawitsa, the father, told me as he fished. “We pay for that with our culture.”

When Whalawitsa said “we pay for that,” he meant tribes like his throughout the Columbia Basin who consider themselves the “salmon people.” And when he said “so everybody else can have that,” he might as well have pointed right at me.

I live in Portland, Oregon, the city where I grew up. It sits just south of the confluence of the Willamette and the Columbia rivers on land taken from Indigenous people.

My dad’s foundry supply business — the one that housed me, fed me and put me through school — only existed because of the shipping and manufacturing industries enabled by the river and the dams.

I proposed to my wife on a stern-wheeler on the Columbia River, the tourist boat floating on a reservoir created between two dams, in a spot that used to be a series of rapids where tribes fished.

There’s no one in this region whose life isn’t touched by the fish, whether they think about it or not. We populated towns to fish for salmon and can them. We sacrificed them for cheap electricity. Even the region’s iconic farming and timber industries wouldn’t be possible without salmon, whose dying bodies have enriched the Northwest soil with ocean nutrients.

But for decades the injustice at the heart of that story has been systematically hidden. There was nothing in my history or social studies classes about Northwest tribes. It wasn’t until 2017 that the Oregon Department of Education required schools to teach Native American history. And the Army Corps of Engineers, which operates most Columbia River dams, has its own curriculum for use in schools around the region; it glosses over the damage done to tribes, talking instead about how they’ve worked alongside federal agencies to help salmon recover.

David G. Lewis, a professor at Oregon State University and a member of the Confederated Tribes of the Grand Ronde in Oregon, has spent much of his career compiling previously untold histories of tribal experiences in the region, rewriting the “white person’s history” he sees in most published works.

“Average folks just do not know how bad that history is,” Lewis said, “the trauma, the abuses, the loss tribes experienced for more than 150 years.”

Before the era of dam building, the most important fishing site for upper Columbia River tribes was a huge collection of waterfalls they called Shonitkwu (meaning “roaring waters”). Downriver tribes had Wy-am (“echo of falling water”). In a case from the early 1900s, the Supreme Court described Native peoples’ right to fish locations like these as “not much less necessary to their existence than the atmosphere they breathed.”

Both those iconic sets of waterfalls, known today as Kettle Falls and Celilo Falls, are gone. Also gone are other, smaller fishing grounds, destroyed by the dams. That’s a blatant violation of treaty language, signed by the U.S. government and tribes, that reserved the right to fish at all usual and accustomed places.

Tribes, who have never stopped fighting for salmon and their treaty rights, are now in negotiations with the Biden administration. Over the next year, the administration says it will decide whether to take the unprecedented steps of removing some dams on the Snake River and reintroducing salmon in areas of the Columbia where they’ve been extinct for nearly a century.

Scientists say that, because of climate change, the time to reverse some of the damage on the Columbia and Snake rivers is, essentially, now or never.

In the early 1900s, after the salmon canning industry had begun to exhaust fish populations, Northwest states sought to preserve the supply for commercial catch — specifically by putting restrictions on fishing by tribes.

This wasn’t an anomaly. “From the time of the founding of the Republic, state governments have consistently maintained an adversary, if not openly hostile, posture towards the Indian tribes and their separate rights.” That was the conclusion reached by Alvin Ziontz, an attorney who spent 30 years representing tribes in the Northwest, in a little-known history of treaty fishing rights he assembled in 1977.

Both Washington and Oregon, according to Ziontz, found ways to allocate nearly the entire harvest of the region’s salmon to nontribal fisheries. They justified it by saying restrictions on tribal fishing were necessary for salmon conservation, even though there’s evidence that before European settlers, tribes actually increased abundance by actively managing salmon populations.

In 1947, as we previously reported, the Department of the Interior asserted that the “the present salmon run must be sacrificed” for the sake of dam building, but it added that “efforts should be directed toward ameliorating the impact of this development upon the injured interests.”

Columbia River tribes, whose traditional fisheries would be located behind many proposed dams, were the most injured interest. But they received almost none of the amelioration, which came in the form of 26 government-funded hatcheries along the Columbia. All but two of those were sited below the dams, to boost commercial and sport fishing nearer the ocean: The fish they made would never swim as far as tribes’ fishing grounds.

Around that same time, after returning from fighting in World War II, two members of the Warm Springs Tribe began hatching salmon to plant in Central Oregon rivers. State officials shut the effort down because they hadn’t authorized it.

For many years, states also tried to prevent tribes from ever harvesting fish produced at government hatcheries. As late as the 1970s, Washington argued in court that tribes had no right to harvest the salmon produced in its hatcheries.

Tribal members fought to assert their treaty rights. And they were jailed for it.

In an infamous case known as the Salmon Scam, 75 Native fishermen were arrested in a federal sting operation claiming their poaching was responsible for 40,000 fish missing from the Columbia River. Yakama fisherman David Sohappy, whom federal investigators cast as the ringleader, was sentenced to five years in prison. It later turned out the fish weren’t actually missing: As the Yakima Herald-Republic reported, they’d been driven away by pollution from a nearby aluminum plant.

In the middle of the last century, as dam building and state policies were driving Columbia River Indian people from their homes and ways of life, a national policy emerged to terminate Native tribes entirely: For 20 years, the U.S. aimed to erase its obligations to tribes by assimilating Native people into cities and white culture and then eliminating recognized tribes, reservations and the federal Bureau of Indian Affairs. (The policy was abandoned by the Nixon administration, which condemned it as “clearly harmful.”)

In the Northwest, tribes found ways to preserve their culture and adapt to the losses of wild salmon and sacred fishing grounds. They also faced backlash for it.

When we reported on dwindling survival rates for salmon, I received emails blaming Native people for catching too many fish, despite the fact their harvest agreements with states are closely monitored. The same thing happened when Seattle TV station KING 5 reported on salmon and dams in the Skagit River, prompting the head of Washington’s Department of Fish and Wildlife to denounce such blame as “misinformation.”

Similarly, tribal hatcheries have come under scrutiny from federal regulators and wild fish advocates for diluting the health of wild salmon with fish bred in captivity. It’s an ironic dynamic given that the hatcheries were the government’s own stop-gap invention, and that tribes have pioneered hatchery techniques specifically designed to help wild populations.

“Tribes and salmon will not look as they did 200 years ago, so maybe stop expecting that of either, given what we live in now,” said Zach Penney, a fisheries scientist and member of the Nez Perce Tribe.

I spoke with Penney a few months ago, while he was head of fisheries science for the Columbia River Inter-Tribal Fish Commission, a coalition of four tribes that coordinates fisheries policy. He’s now a senior adviser for the National Oceanic and Atmospheric Administration, the federal agency responsible for endangered salmon recovery. Penney said that back when he was a doctoral student, he was asked to explain the tribal perspective on salmon so often that he eventually developed a slide presentation.

In it, he draws a parallel between Native people, who were driven onto reservations, and salmon, who were driven into hatcheries. Both were forced to adapt to unfamiliar lifestyles. And for both, the changes did not bring good things.

As fishing disappeared, Ziontz wrote in his history 45 years ago, the river tribes’ economic position also changed: “From a life of relative plenty and ease, they moved to the position ultimately of poverty and want.”

The harms have outlasted the policies that caused them. Now, as state and federal officials look to address the region’s fish and rivers, they are seeking compromises — without acknowledging the compromises that have already been made.

In debating the merits of dam removal and other measures to save salmon from extinction, elected leaders in the region and Washington, D.C., are taking every measure to ensure that the river’s other users — like farmers, irrigators and power producers — are kept whole in the process.

Penney recalled sitting in meetings in the past few years where tribes were told they’d need to make compromises along with everyone else.

“I think that’s really insulting,” Penney said. “We’ve already compromised our way of life. This has all been compromised already. And you’re asking for more?”