NY Times: How Long Before These Salmon Are Gone? ‘Maybe 20 Years’

Warming waters and a series of dams are making the grueling migration of the Chinook salmon even more deadly — and threatening dozens of other species. 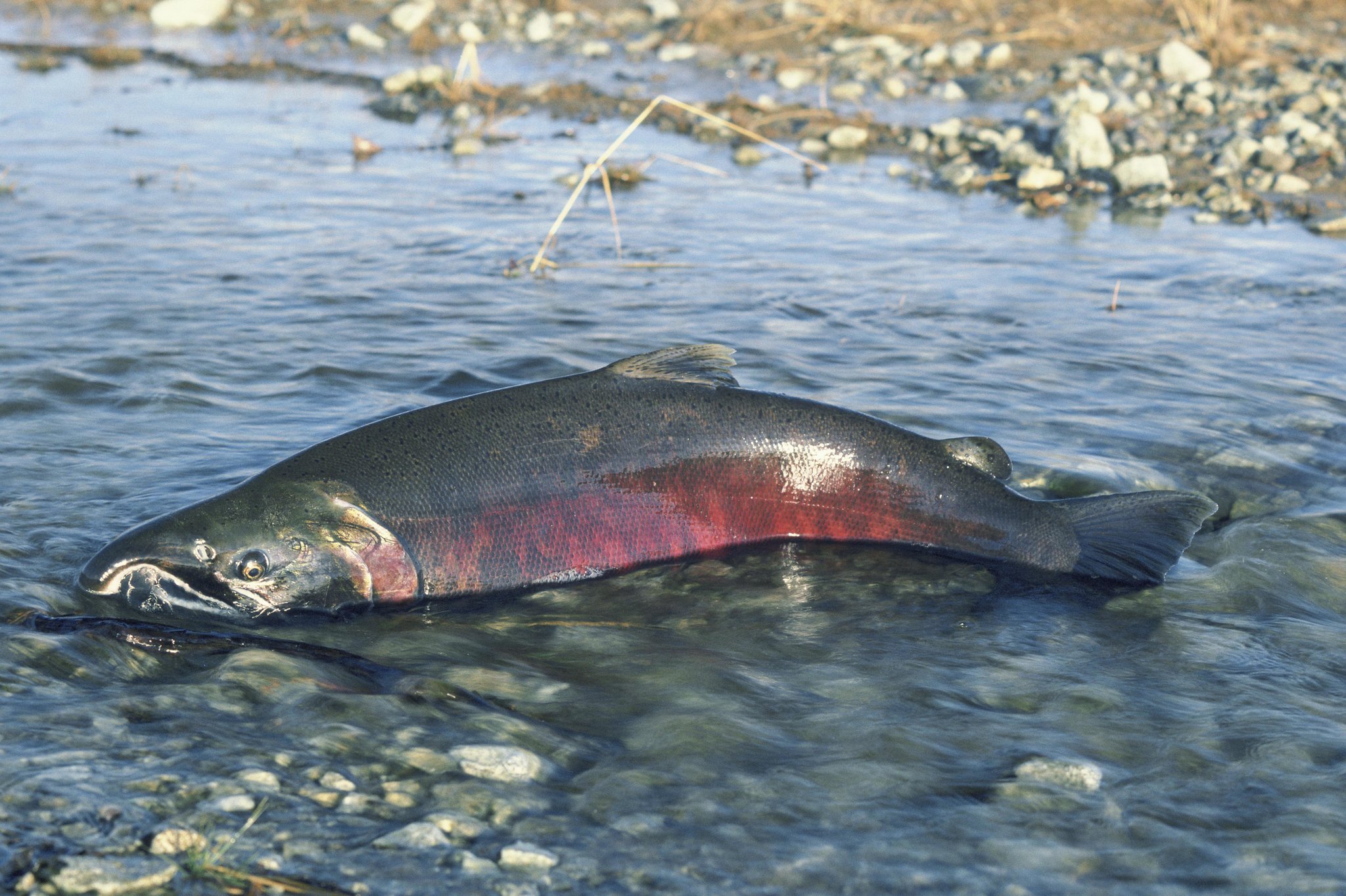 North Fork, Idaho — The Middle Fork of the Salmon River, one of the wildest rivers in the contiguous United States, is prime fish habitat. Cold, clear waters from melting snow tumble out of the Salmon River Mountains and into the boulder-strewn river, which is federally protected.

The last of the spawning spring-summer Chinook salmon arrived here in June after a herculean 800-mile upstream swim. Now the big fish — which can weigh up to 30 pounds — are finishing their courtship rituals. Next year there will be a new generation of Chinook.

In spite of this pristine 112-mile-long mountain refuge, the fish that have returned here to reproduce and then die for countless generations are in deep trouble.

Some 45,000 to 50,000 spring-summer Chinook spawned here in the 1950s. These days, the average is about 1,500 fish, and declining. And not just here: Native fish are in free-fall throughout the Columbia River basin, a situation so dire that many groups are urging the removal of four large dams to keep the fish from being lost.

“The Columbia River was once the most productive wild Chinook habitat in the world,” said Russ Thurow, a fisheries research scientist with the Forest Service’s Rocky Mountain Research Station.

Standing alongside the Salmon River in Idaho, Mr. Thurow considered the prospect that the fish he had spent most of his life studying could disappear. “It’s hard to say, but now these fish have maybe four generations left before they are gone,” he said. “Maybe 20 years.”

Thirteen species of salmon and steelhead trout are listed as threatened or endangered in the Columbia basin, an area that includes parts of Idaho, Oregon, Washington, Montana and British Columbia. Salmon are a keystone species in this region, critical as a food source for animals from bears to eagles to insects.

That group of beneficiaries includes an endangere

d population of orcas, or killer whales, along the West Coast that survive by eating Chinook in the winter and spring, up to 30 a day.

Many experts believe the orcas are starving in large part because of the decline of wild salmon. This year alone, their number has dropped from 76 to 73, alarming conservationists and scientists. Last year, an orca mother carried a dead calf for 17 days on her back. She was presumed to be grieving.

“The best thing you could do to get more spring Chinook for the orcas is to remove those four lower dams,” said Don Chapman, a retired fisheries scientist who worked as a consultant to the hydropower industry and defended the dams and mitigation efforts.

He has since changed his mind about the dams: “They kill too many juveniles going downstream and some adults going back.”

Salmon are swimming in warming waters, with uncertain consequences, according to a recent study. Breaching the dams also would help keep water temperatures cooler as the climate changes, Dr. Chapman said.

Chinook, or king salmon, are huge, powerful fish, the largest member of the salmon family in North America. Spring-summer Chinook make an epic migration thousands of miles through the Columbia River to the waters surrounding Alaska’s Aleutian Islands, and then back to the high elevations of the Rocky Mountains.

Before the 20th century, some 10 million to 16 million adult salmon and steelhead trout are thought to have returned annually to the Columbia River system. The current return of wild fish is 2 percent of that, by some estimates.

While farming, logging and especially the commercial harvest of salmon in the early 20th century all took a toll, the single greatest impact on wild fish comes from eight large dams — four on the Columbia and four on the Snake River, a major tributary.

The four Snake River dams are used primarily to create reservoirs for the barging of Idaho’s wheat to ports. But the dams raise water temperatures and block travel migration routes, increasing fish mortality.

Climate change also has raised both river and ocean water temperatures, which can be deadly to fish. In 2015, for example, unusually warm water killed an estimated 250,000 sockeye salmon.

For decades, experts have tried to ameliorate the loss of the Columbia’s wild fish by installing ladders that allow the fish to swim around the dams, and by placing them in barges and trucks for transport around the dams. The massive efforts have not stemmed the decline, despite the fact that more than $16 billion has been spent on recovery over the last several decades.

Now most scientists come down on the side of removing the dams. Last fall, orca researchers urged Gov. Jay Inslee of Washington and the Southern Resident Orca Task Force, a state government panel, to begin removing the four dams on the Snake River to aid the starving whales.

The federal agencies responsible for managing fisheries on the Columbia, though, maintain that removing the Snake River dams is not critical to the survival of salmon and that hatchery-reared fish have made up for the loss of the river’s wild fish for the orcas.

The southern resident killer whales “do not distinguish between hatchery and wild fish,” the Northwest Fisheries Science Center, part of the National Oceanic and Atmospheric Administration, said in a statement.

The National Marine Fisheries Service has proposed killing more than 1,100 sea lions along the Columbia River because they eat salmon as they gather to spawn.

Those who want to keep the dams point to changing ocean conditions as a major factor in the decline of the salmon. Water temperatures have been unusually warm in recent years, which reduces salmon food sources. Federal officials just announced that the marine heat wave has returned this year.

But hatchery fish are not the same, said Deborah A. Giles, science and research director at Wild Orca, a group that studies and advocates for protection of the whales. Orcas evolved eating big wild fish, some 300 to 350 pounds a day.

“Wild fish are much bigger and more lipid-rich,” she said. “Having to catch the equivalent of 350 pounds in hatchery fish, which are smaller and lower quality, expends significantly more energy. They have to work a lot harder for their meals.”

Nutritional stress is part of the reason that the whales are in decline. About 70 percent of pregnancies among the southern resident orcas are lost before the calves are born, an alarmingly high figure, according to a recent paper.

Since 2001, federal courts have taken the agencies responsible for protecting the salmon, including NOAA and the Army Corps of Engineers, to task for not doing enough to ensure the survival of the fish. In 2016, Judge Michael H. Simon of the Federal District Court of Oregon ordered a new plan to restore the species, saying previous efforts had violated endangered species and environmental laws. The ruling cited the agencies’ refusal to consider removing the lower Snake River dams. The plan is due in 2021.

Federal and state agencies have released untold numbers of hatchery-reared fish to replace wild fish in the Columbia basin. But some experts believe that hatchery fish could adversely affect the genome of the remaining wild fish.

Traits that wild fish lose by mating with hatchery fish may one day be important for adaptation to climate change, Mr. Thurow said. The Middle Fork population, here in Idaho, is one of the few without genetic influences from hatchery-reared fish.

The extreme migration of the spring-summer Chinook salmon is one of the natural world’s great journeys.

Before the dams were built in the 1960s and 1970s, the fish born in the Middle Fork were swept by strong spring currents 800 miles to the sea. The rivers moved them rapidly along, from six to 10 miles per hour, and the young fish reached the brackish waters of the Columbia River estuary in a couple of weeks.

As they travel, the parrs, or young freshwater salmon, undergo a profound transformation called smoltification, becoming smolts able to thrive in saltwater. After leaving the river, the fish turn north and travel to the North Pacific, near the Aleutian Islands.

They spend up to four years feeding at sea, and then those that survive the seagoing journey return to the mouth of the Columbia. Their physiological changes are reversed as they move upstream, and they again become freshwater fish. 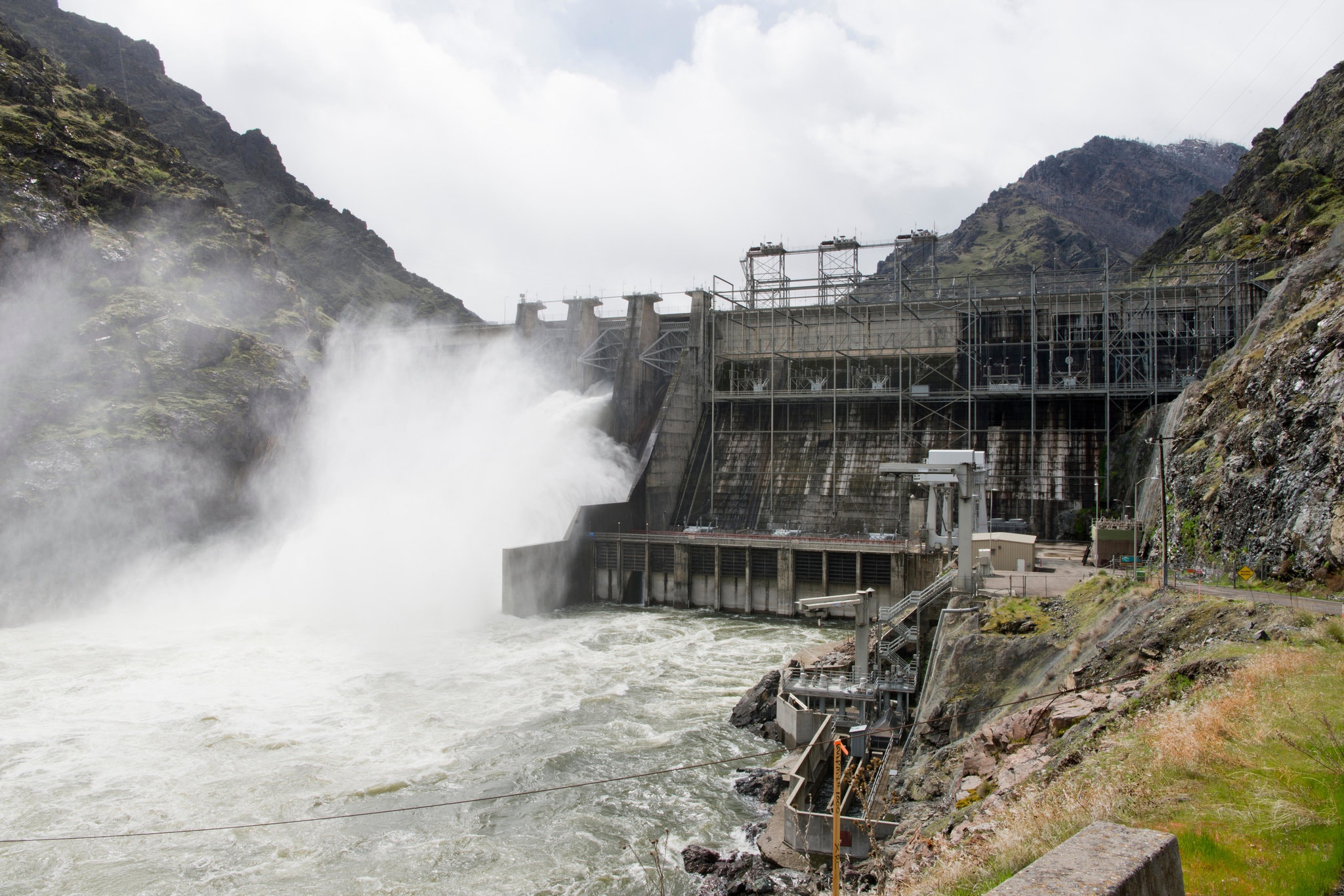 Picking up the scent of their natal stream, they fight the current, foregoing food on the grueling trip, gaining about 6,500 feet in elevation, and overcoming physical barriers in what biologists describe as a heroic journey.

“I’ve seen them jump an eight-foot waterfall, and they are known to jump 12 feet,” said Mr. Thurow. “They are the definition of persistence.”

Chinook are known as “high-fidelity” spawners, not only returning to the stream where they were born, but also often to the same shallows. Then the game is afoot: In their waning days, as males battle for dominance, females excavate a redd, a depression in the gravel riverbed.

The female releases clusters of eggs as the male sidles up, releasing its sperm at the same time. The current mixes them, resulting in fertilization. The eggs are adhesive and stick to the gravel after they fall. The female buries them in an egg pocket.

The mating is repeated multiple times; all told, some 5,000 eggs may be released by a single female. “By the times she finishes, she’s within a day or two of dying,” Mr. Thurow said. The next spring, the offspring emerge and make their own journey to the sea. Always a gauntlet, the migration now is far more deadly. The eight large dams along the Snake and Columbia rivers created 325 miles of slack water in reservoirs. The average speed of the water flowing downstream has dropped to less than 1.5 miles per hour, and it takes the fish far longer to reach the sea.

When the parrs reach a reservoir on the way, they must swim instead of being pushed by the current, and often become disoriented and are more susceptible to predators. Delayed, they may go through smoltification at the wrong time.

The young salmon eat plankton and insects. But the waters of the Pacific along the West Coast have experienced unusual warming — the so-called blob — which reduces the available food supply.

Before the Snake River dams were built, three to six of every 100 fish that left their natal streams returned home, a ratio called smolt-to-adult return. Today that number is just under one. Biologists say it must reach four to rebuild the fisheries.

It is not just orcas that are suffering because of the decline of salmon. An estimated 137 species rely on the surge of protein brought upriver by millions of fish each year. The salmon also provided phosphorous, nitrogen and other nutrients that nourish the great forests of the Northwest. Three-quarters of the nutrients in some trees in Alaska and British Columbia are derived from salmon.

The Middle Fork of Salmon River will be critical as the waters of the Columbia warm, Mr. Thurow said. High-altitude streams are expected to warm less, and the Chinook here will find a cold-water refuge — and if they adapt, a base for repopulating other streams.

“The outlook isn’t good, but these fish are what give me hope,” Mr. Thurow said. “Despite all of the obstacles, they are still here.”