NRDC: Saving Salmon—from One Generation of Fisherwomen to the Next

Keyen Singer, a member of the Confederated Tribes of the Umatilla Indian Reservation, carries on a maternal legacy of conserving salmon and preserving culture. Their efforts could soon pay off. 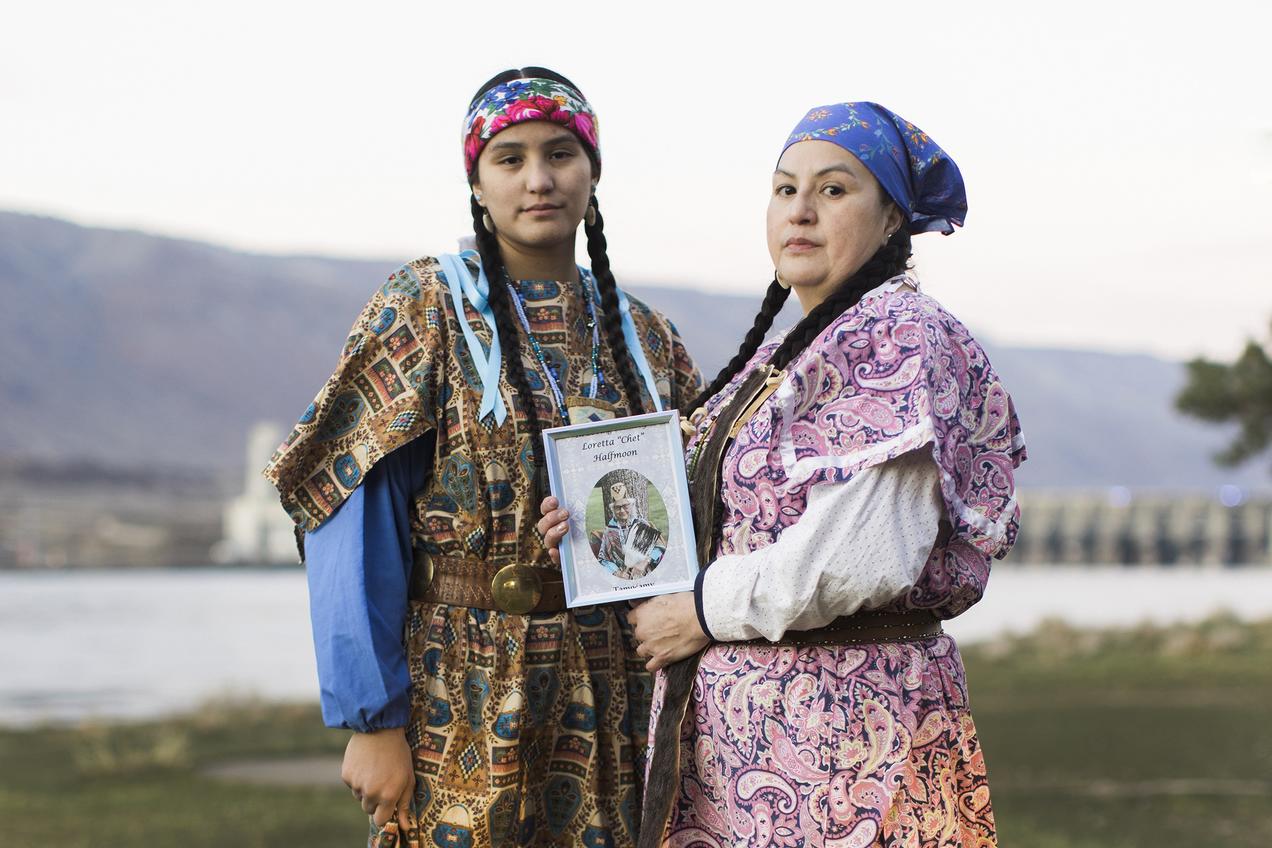 If Keyen Singer had her way, she would be out on the family boat, fishing for salmon in the Columbia River alongside her mother, just like the generations of women who came before them. But the high school senior, a member of the Confederated Tribes of the Umatilla Indian Reservation (CTUIR), realizes that her relationship with one of her tribe’s first foods will be different than that of her foremothers. Singer knows her work to recover the Columbia Basin’s disappearing salmon population won’t take place on the river but instead in the classroom, out in the field, at conferences, and online.

And the salmon and steelhead need all the help they can get. The wild fish—Chinook, sockeye, coho, and steelhead—return to the Snake River, the Columbia River’s largest tributary, from the Pacific Ocean each mating season, but too few of them have been making the trip. Last year, the National Oceanic and Atmospheric Administration warned that even the largest Snake River Chinook salmon populations are highly likely to go extinct by 2060. In January, the first salmon began returning six weeks ahead of schedule—a major red flag that signals that this fishing season will be even shorter than usual, says Cara Greene, Singer’s mother.

“I promised my kids they would be taught how to fish and do what I do, but we can’t even take them out there because our salmon is pretty much gone,” Greene says.

Feeling the urgency, Singer, alongside other Indigenous youth in her community, has dedicated herself to the salmon’s survival. Her efforts honor the legacy of her great-grandmother, Loretta "Chet" Halfmoon. After the construction of The Dalles Dam in 1957, Celilo Falls, one of the world’s most abundant fisheries, flooded, destroying its vital Native trading site. In the aftermath, Halfmoon was one of a few celebrated “woman warriors” who fought for decades (getting arrested and being jailed multiple times) to secure tribal and treaty-based fishing rights on the main stem of the Columbia River.

The placement of The Dalles Dam and more than a dozen others along the Columbia and Snake rivers throughout the 20th century have caused their shallower waters to warm and hindered migration and, in many places, blocked access for the salmon trying to return to their spawning grounds. Many tribal members still remember the dams’ construction in the 1960s and 1970s, and the aftermath—the flooded villages, the altered landscape, the missing salmon.

Singer and Greene work to uphold the ancient promise their ancestors made. According to an Indigenous creation story, they are to care for the salmon since the fish sacrificed themselves for humans’ survival. But the grueling labor of fishing has taken its toll on Greene’s 41-year-old body, and she refuses to let her daughter suffer the same for what, these days, is very little reward.

Greene sees the impacts of the dams, climate change, and pollution firsthand out on the water. Creeks are drying up. Sea lions are traveling farther up the Columbia River from the sea in search of fish. Pelicans abound, and heavy riverweed flourishes. Fish are becoming diseased, perhaps due to the warmer waters caused by the dams, or maybe from contamination from the nearby Hanford nuclear site, or possibly both.

She has watched the fish struggle. Salmon suffer at temperatures above 68 degrees Fahrenheit and risk mortality above 70 degrees, and the reservoirs created by dams on the lower Columbia and Snake rivers all reached above 70 degrees last year. If the region’s temperature trends continue to rise, the rivers will only grow hotter. “We are in a salmon crisis,” Donald Sampson of the Northwest Tribal Salmon Alliance said in a Columbia Riverkeeper video last year. “Imagine the heat that we’re feeling. They’re feeling it 10 times worse in that river. They’re suffocating, they’re weakened. And they just want to come to their home, their beautiful home.”

A single-digit daily catch is barely enough to make ends meet financially, let alone preserve any salmon for the winter. Last fall, after selling what she needed for income, Greene was only able to can one salmon to feed her family for the winter. “It’s really heartbreaking,” she says.

Despite the physical and emotional pain, Greene says her love for the river and its salmon keeps her going—as does her daughter’s determination to restore the ecosystem. “My mom, my grandmas and grandpas, my aunts and uncles, work hard out on that river,” says Singer, who will be attending the University of Oregon in the fall. “They won’t let me out on the boat, but at least I get to do my own work to support them.” Her family members have said they want an easier life for her. “I'm reading and researching and talking to people about salmon. I’m advocating. I don’t get to fish, but I do get to fight for the salmon.”

For decades, tribes in the region have led efforts that have so far helped prevent the salmon’s extinction, including securing Endangered Species Act listings for different populations, developing their own fisheries programs, leading habitat restoration projects, spearheading scientific research, and stewarding several hatcheries in the Columbia Basin. The federal government, meanwhile, has spent $17 billion since 1980 on fish mitigation and restoration efforts, often working in partnership with the tribes, but it has so far resisted making major changes to the hydropower dams.

As the CTUIR Youth Leadership Council’s cultural ambassador, Singer is spreading awareness to her peers about the significance of salmon, along with other traditional foods and practices. Away from the reservation, including at the semi-annual Affiliated Tribes of Northwest Indians conventions, she has linked up with regional advocates focused on the recovery of fish populations in the Columbia River Basin. Those discussions led to a letter last June from tribal youth to President Biden, telling him to act to save salmon from extinction and to preserve their traditions, as well their future, by removing the lower Snake River’s dams. (A petition asking the public to support their call to action has generated more than 17,000 signatures to date.)

To give salmon a shot at survival, advocates say the four lower Snake River dams—Lower Granite, Little Goose, Lower Monumental, and Ice Harbor—have to go. And after years of mounting pressure from tribes and environmental organizations, government officials from both sides of the aisle may be finally coming around to the idea.

In February 2021, Congressman Mike Simpson, a Republican from Idaho, proposed a $33 billion Columbia Basin Fund initiative that would, among other things, restore a free-flowing lower Snake River. And in November, Senator Patty Murray, a Democrat from Washington, along with the state’s governor, Jay Inslee, announced a joint effort to determine the feasibility of removing the dams, giving themselves until the end of July to come to a decision. The Biden administration is also taking a hard look at the problem.

Restoring the lower Snake River would also require the replacement of the power the dams generate with clean energy—a challenge that NRDC senior attorney Giulia Good Stefani believes the region is well-equipped to navigate. Clean energy transitions of this magnitude are achievable. NRDC’s clean energy experts are actively working to help phase out coal-fired power plants in Oregon and Montana and have supported the closure of Diablo Canyon nuclear power plant in California, with a transition plan that relies on entirely clean resources. The shift to other sources of renewable energy, Good Stefani says, could happen over the next decade. Achieving a new energy landscape here, however, will require a holistic approach that considers the needs of the region’s stakeholders. “It's not just about how we get to zero carbon,” she says. “It’s how we get to zero carbon and a more just and equitable world.”

Singer can get frustrated when she thinks about how so many generations of her people have had to fight so hard to save their traditions and ecosystem. “But we've also passed down the strength and the ability and the motivation to keep saving our salmon,” she says. “The fight keeps getting passed down because no one can find the solution. I hope that this generation—my generation—I hope we can find it.”