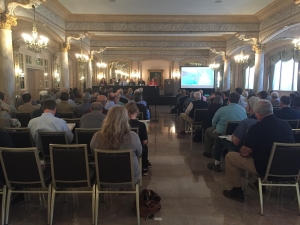 Federal officials were in Spokane Wednesday night to talk about the future of the Columbia River Treaty, an agreement between the U.S. and Canada that dates back to 1964. It governs hydropower and flood control measures along the upper reaches of the 1,200 mile Columbia River.

A six-member panel will represent the U.S. in negotiations to update the treaty-- four men and two women. Noticeably absent were members of any of the numerous Native American tribes along the Columbia, which have been pushing to expand the treaty to include more emphasis on the environmental protections.

“I can’t actually say why they don’t have tribal representation on their panel," said Norma Sanchez, who serves on the tribal council of the Colville Confederated Tribes, whose lands are in Washington state. She is also the vice president of the tribes' Natural Resource Committee.

“The majority of the people on the panel either work for the federal government (or) the power companies," Sanchez said.

The panel includes representatives from the U.S. Bureau of Reclamation, the Army Corp of Engineers, the National Oceanic and Atmospheric Administration and the Bonneville Power Administration.

Many audience members pressed the panel's lead negotiator, Jill Smail of the U.S. Department of State on why the U.S. negotiating team lacks a tribal representative.

"We thought that the best way to meet our objectives from a foreign policy point of view was to have a focused team,” Smail said.

Smail said she did not have clearance from the State Department to comment further.

Other audience members called on the negotiating team to widen the scope of the treaty to include restoring salmon runs to the river.

“We have an opportunity to return the salmon to the Columbia, which would be the greatest thing that has ever happened to the river since building Chief Joseph and Grand Coulee dams,” said Matt Wolohan, a resident of Northport, Washington, a tiny town on the Columbia River near the US-Canada border.

Key provisions of the Columbia River Treaty expire in 2024. Last winter, the U.S. and Canada agreed to begin the renegotiation process.