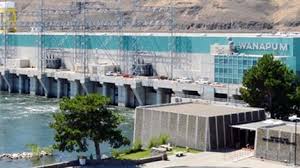 The ongoing issue with the cracked Wanapum Dam in central Washington is now creating a problem for migrating salmon.

The drawdown of water between the Wanapum and the Rock Island dams to relieve pressure on the crack means the water levels are down about 25 feet at the base of both dams.

Now, government fish scientists and engineers are trying to figure out just how to get adult salmon by both hulking concrete structures. At Wanapum, engineers plan to pump water into the fish ladder and create a sort of waterslide for salmon.
Russell Langshaw, a fisheries scientist with Grant County utility district that owns and operates Wanapum, says record numbers of fish are headed that way, so they have to get it figured out by mid-April.
“We have a lot of fish coming back this year, and we agree it’s an absolute necessity that we have safe and effective passage at both Wanapum and Rock Island dams.”
Langshaw says the smaller, juvenile fish are expected to be fine. They’re going downstream, and can move through the spillways and turbines.
http://www.opb.org/news/article/npr-fish-experts-plan-a-salmon-water-slide-on-cracked-wanapum-dam/