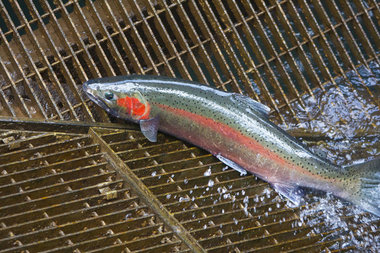 The National Oceanic and Atmospheric Administration, which oversees Northwest salmon and steelhead listings under the Endangered Species Act, has hired two university consensus-building groups to interview Columbia Basin leaders about how to best recover wild salmon in the long term.

The Oregon Consensus program at Portland State University and the William D. Ruckelshaus Center in Washington will conduct hourlong interviews of more than 150 people, with a first report due late next summer.

Leaders of tribes and myriad interest groups in Oregon, Washington, Idaho and Montana will be among those interviewed. The interviewers will be neutral, NOAA says, and responses will not be attributed to specific people to promote candid conversations.

"We want to see if it can provide a better picture of what it would take to get to salmon recovery," says Barry Thom, deputy regional administrator for the Northwest region of NOAA's National Marine Fisheries Service.

The effort, outlined in a NOAA letter to 150 groups Tuesday, will cost more than $200,000, with roughly 50 additional slots set aside for interviews of people mentioned in initial conversations. NOAA wants a basinwide plan that integrates the local recovery plans developed in the Columbia and Snake River basins, Thom said.

A bigger challenge: Reaching consensus going forward on the right mix of fishing restrictions, hatchery reforms, dam modifications and habitat restoration to bump 13 runs of salmon and steelhead off the endangered species list.

Interest groups on both sides applauded NOAA's first step, saying they'd welcome a more comprehensive, collaborative approach to salmon recovery. Lawsuits have driven the process for more than a decade.

A broad approach would expand the focus beyond hydroelectric dams, said Terry Flores, executive director of Northwest River Partners, whose members include utilities, farmers and ports on the Columbia and Snake.

"There are so many things actually going on, if we can understand how they link up that's a good thing," she said.

Said Gilly Lyons, policy director for Save our Wild Salmon: "Maybe it will get a more constructive conversation going."