New York Times: Northwest’s Salmon Population May Be Running Out of Time 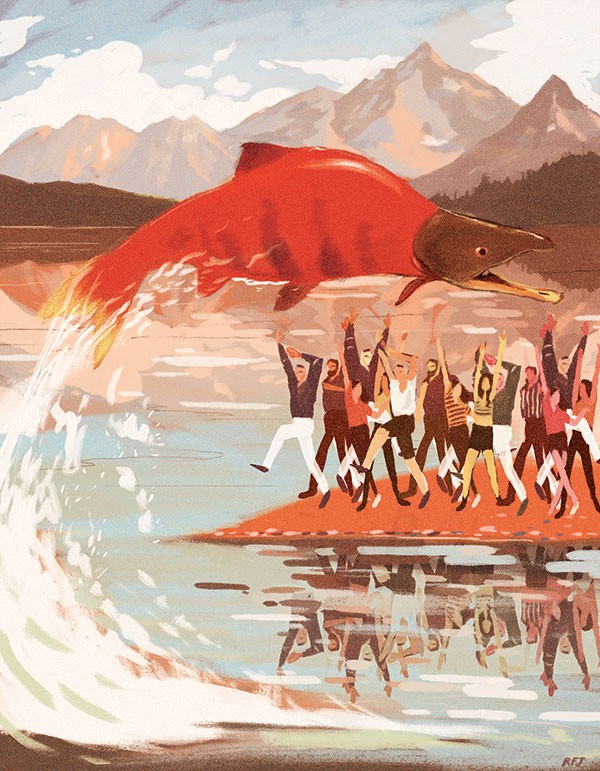 A Washington State report put it bluntly: Because of the devastating effects of climate change and deteriorating habitats, several species of salmon in the Pacific Northwest are “on the brink of extinction.”

Of the 14 species of salmon and steelhead trout in Washington State that have been deemed endangered and are protected under the Endangered Species Act, 10 are lagging recovery goals and five of those are considered “in crisis,” according to the 2020 State of Salmon in Watersheds report, which was released last week.

“Time is running out,” said the report, which is produced every other year by the Washington State Recreation and Conservation Office. “The climate is changing, rivers are warming, habitat is diminishing, and the natural systems that support salmon in the Pacific Northwest need help now more than ever.”

Researchers say recovery efforts — involving state and federal agencies, Native American tribes, local conservation groups and others — have helped slow the decline of some salmon populations. The report found that two species — the Hood Canal summer chum and Snake River fall chinook — were approaching their recovery goals. It also noted that no new salmon species had been added to the endangered list since
2007.

“We are at least treading water,” said Kaleen Cottingham, director of the Washington State Recreation and Conservation Office. “We have not, however, seen the kind of progress that we had hoped for.”

With the effects of climate change expected to accelerate, researchers said that more must be done to prevent further population decline and the possible extinction of some species.

“We’re at a crossroads,” said Erik Neatherlin, the executive coordinator of the Governor’s Salmon Recovery Office in Washington. “There is a lot at stake. If we continue doing the things the way we’ve always done them, we’ll just continue to see a slow decline. Or we can think about where we’re going and change course.”

Salmon play a vital role in the environment, economy and culture of the Pacific Northwest. At least 138 species, from insects to orcas, depend on salmon for their food in some way. Salmon support an estimated 16,000 jobs in the commercial and recreational fishing industry, and they are a draw for tourists.

In the 1850s, Native American tribes in the Pacific Northwest signed treaties with the United States that relinquished their land but allowed them to retain the right to salmon fishing and other resources.

Salmon begin their lives in freshwater, migrate downstream to estuaries and, eventually, the ocean, where they live for a while before returning to their natal streams to spawn. (It is estimated that less than 1 percent of salmon survive long enough to return.)

Before the 20th century, an estimated 10 million to 16 million adult salmon and steelhead trout returned annually to the Columbia River system. The current return of wild fish is 2 percent of that, by some estimates.

One of the largest factors inhibiting salmon recovery is habitat loss, Mr. Neatherlin said. A growing human population has led to development along the shoreline, and the addition of bulkheads, or sea walls, that encroach on beaches where salmon generally find insects and other food. More pavement and hard surfaces have contributed to an increase in toxic storm water runoff that pollutes Puget Sound.

More than 20,000 barriers — including dams, roads and water storage structures — block salmon migration paths in Washington alone, according to the state’s Department of Fish and Wildlife.

The waters they swim in are warming — in 2015, unusually warm water killed an estimated 250,000 sockeye salmon — and there is less cold water to feed streams in the summer, the report said, because slowly rising temperatures have accelerated the melting of glaciers.

“Salmon have demonstrated during the past 10,000 years that they can adapt to a changing environment,” the report said. But “climate change has exacerbated these problems. When combined with fewer natural buffers, degraded habitats, and lost genetic diversity within the salmon themselves, salmon are challenged to change quickly enough and their survival is at stake.”

Other factors, including predation from animals that eat salmon, also play a role in the decline of salmon populations, Mr. Neatherlin said.

The struggle to preserve salmon populations is felt across the Pacific Northwest, said Sam Mace, the Inland Northwest director of Save Our Wild Salmon, a coalition of groups committed to preserving salmon in the Columbia-Snake River Basin. She has witnessed a slow decline of salmon over the past 20 years.

In addition to issues outlined in the report, Ms. Mace said Save Our Wild Salmon has advocated the removal of four huge dams on the Snake River.

Last year, thousands of steelhead trout were expected to run in a main tributary of the Snake River but there were barely 300 of them, she said. In Idaho, where communities rely on the sport fishing season, the loss of tourists when fish don’t arrive can be devastating.

“I mean, the hotels were empty, everything was empty because there were no fish to catch,” she said. “It’s not just a biological crisis we’re having out here. It’s economic.”