New York Times: Breaching Dams ‘Must Be an Option’ to Save Salmon, Washington Democrats Say 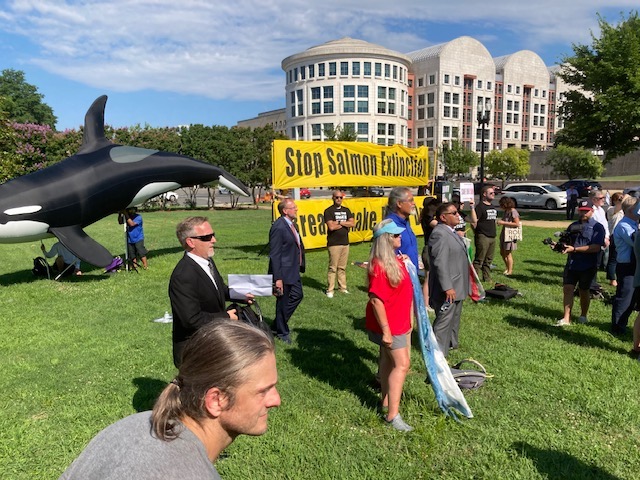 WASHINGTON — Two top Democrats in Washington State have come out in favor of eventually breaching four hydroelectric dams in the lower Snake River to try to save endangered salmon runs, a contentious option that environmentalists, tribes and business groups in the region have argued over for decades.

In recommendations issued on Thursday, Senator Patty Murray and Gov. Jay Inslee provided their most definitive stance in the fight to save salmon in the Columbia River basin and honor longstanding treaties with tribal nations in the Pacific Northwest.

A draft version of a study that Ms. Murray and Mr. Inslee commissioned found this summer that removing the four dams was the most promising approach to salmon recovery. The report said it would cost $10.3 billion to $27.2 billion to replace the electricity generated by the dams, find other ways to ship grain from the region and provide irrigation water. But the draft stopped short of taking a position on removing the dams.

In the recommendations, the governor and the senator said that breaching the dams “must be an option we strive to make viable.”

Ms. Murray said in a statement that salmon runs were clearly struggling, and that extinction of the region’s salmon was not an option. But because breaching the dams would need congressional authorization and bipartisan support, she said, there had to be credible possibilities for replacing renewable energy sources, keeping shipping costs down and countering the effects of climate change.

“It’s clear that breach is not an option right now,” Ms. Murray said. “While many mitigation measures exist, many require further analysis or are not possible to implement in the near term.”

Washington State relies heavily on hydroelectric power generated through dams. But the structures have contributed to the depletion of the salmon population, which is critical to the river basin’s ecosystem. In 2019, state lawmakers passed some of the country’s strongest clean energy legislation, committing to cut coal power by 2025 and transition the state to 100 percent clean and renewable electricity by 2045. Removing the dams would make it more challenging to meet those goals.

Senator Jim Risch, Republican of Idaho, said that Ms. Murray and Mr. Inslee’s report was always going to reach the conclusion that breaching the dams was the best option for salmon recovery. The report was full of “biased information” and “cherry-picked data,” he said.

“Even so, those who commissioned the report eventually had to face up to the facts: First, the benefits provided by the four dams on the lower Snake River far outweigh calls for their removal,” Mr. Risch said. “Second, Congress — and only Congress — can authorize the removal of these dams, and there is no feasible or bipartisan pathway for congressional authorization of dam breaching.”

Mr. Risch said he was open to discussions on other options to increase salmon populations.

The recommendations from Mr. Inslee and Ms. Murray came a month after the Biden administration released a report on the feasibility of removing the four dams to aid salmon recovery, and another on how the energy they produce could be replaced. The dams, the last of which was built in 1975, provide energy to millions of people in the Pacific Northwest.

Mr. Inslee said there were no workable solutions other than replacing the existing infrastructure and breaching the dams.

“The state and federal governments should implement a plan to replace the benefits of the lower Snake River dams to enable breaching to move forward,” he said in a statement.

The report commissioned by Mr. Inslee and Ms. Murray stated that while there had been strong feelings and disagreements about how to save the salmon, there were also “clear areas of common agreement.”

The government has been in litigation for more than three decades for failing to develop an adequate federal recovery plan after Snake River fish started being listed as endangered species.

In 2016, the courts again rejected a proposal by the federal government to recover the salmon population, urging it to consider a plan that included the removal of the four dams.

Bill Arthur, the chairman of the Sierra Club’s Snake/Columbia River Salmon Campaign, said the question was never whether the dams should be replaced but how quickly it needed to be done. The report from Mr. Inslee and Ms. Murray put the Northwest on a presumptive path to breaching the dams, he said. If Congress moved with a sense of urgency, he added, the dams could be removed by the end of the decade.

“There is no reason, that we can see, that you can’t get the energy replacement in place and appropriate mitigation needed within six years,” Mr. Arthur said. “And then it will take three years to remove the dams.”

Collin O’Mara, the president and chief executive of the National Wildlife Federation, said time was not on the government’s side as salmon runs continue to decrease each year. Using resources and funding from the infrastructure law and the Inflation Reduction Act could allow the state and federal governments to develop a comprehensive plan, he said.

“It’s a matter of putting pieces together and making sure no one is left behind,” Mr. O’Mara said. “Unfortunately, there is a track record in this country where the promises are made, but the investment is never followed through.”

Jeremy Takala, the chairman of the Fish and Wildlife Committee of the Yakama Nation, said the region’s tribal nations were not responsible for the decision-making process that led to hydroelectric dams being put in place. The communities have been disproportionately affected since they were installed; members who live along the river have been displaced by flooding.

“We have to make sure when doing this that we don’t repeat history, so we need to have a voice at the table,” Mr. Takala said of breaching the dams. “We know that it can work; we know there are possibilities. But when we talk about the federal hydroelectric system, we want to make sure the tribes are there, the tribes have input, the science is there, and work from our fisheries are there.”