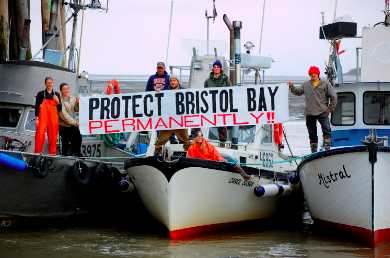 The Obama administration announced on Friday that it was putting the brakes on a massive gold and copper mine proposed for the headwaters of Alaska’s Bristol Bay while it decides whether to prohibit it permanently. This sounds like the death knell for a project, known as the Pebble Mine, that by any measure is an environmental disaster waiting to happen. The mine would gravely threaten one of the richest salmon fisheries in the world and disrupt a delicate marine environment prized by conservationists, native tribes and commercial fishing interests alike.

The administration has not made a final decision, and will take comment over the next few months. But construction cannot begin until it issues a permit. And judging by the announcement from Gina McCarthy, administrator of the Environmental Protection Agency, it would be astonishing if it allowed the project to go forward. “Extensive scientific study,” she said, “has given us ample reason to believe that the Pebble Mine would likely have significant and irreversible negative impacts on the Bristol Bay watershed and its abundant salmon fisheries.”

The project was designed by a Canadian-British mining consortium (the British partner has since pulled out). It claimed that the mine would add 1,000 permanent jobs to Alaska’s struggling economy while unearthing $300 billion worth of copper, gold and molybdenum. The project came close to defeat in a 2008 referendum until a push by Gov. Sarah Palin turned the tide in the mine’s favor.

Over time, the scientific evidence has turned decisively against the project. In two studies, including an assessment in January, the E.P.A. determined that even a carefully designed mining operation would exact a heavy toll on wildlife during construction, destroying more than 80 miles of spawning streams and extensive wetlands. The mine would also generate huge amounts of highly acidic wastes that, in the event of an accident, would pollute streams and wetlands and greatly harm Bristol Bay.

Given the science, this is not the hardest environmental decision the administration has faced or will face. It has yet to devise a legally sound plan to protect endangered salmon runs in the Columbia-Snake River Basin. And it must adjudicate between the needs of the endangered sage grouse and the oil industry, which occupy the same lands in the West. But on Bristol Bay, it is headed in just the right direction.