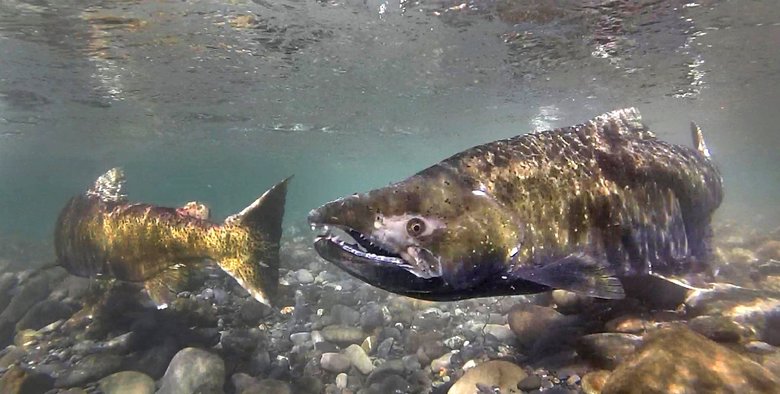 Portland, OR – What was once an endless supply in the Pacific Northwest is now endangered. Millions of Chinook salmon are not surviving migration. Now, the shortage is causing officials to make some difficult decisions.

As much as air or water, so much life in the Pacific Northwest depends on salmon. Over 130 species rely on nature’s original food delivery but fewer salmon are surviving the heroic swim from the open ocean to spawning streams hundreds of miles inland.

And that means trouble for two creatures that really, really love the king of fish. Killer whales and us.

In your grandparent’s day, the Columbia Basin seemed to produce a never-ending supply and salmon the size of people. But those big “June hog” Chinooks are extinct now and this year numbers were so low, the fall fishing season was canceled.

Columbia Riverkeeper Brett Vandenheuvel said, “The estimates are about 17 million salmon would return to the Columbia every year. It was the greatest salmon fishery in the world. And now it’s about a million fish return.”

And most of those are hatchery fish with weaker genes and less fat than their wild cousins. So the southern resident killer whales that live on Chinook are starving. There are only 73 of this kind of orca left on the planet and after a grieving orca mom pushed her dead calf around Puget Sound for weeks last summer, it rekindled a decades-old debate: salmon vs. dams.

To find their birth stream, many Chinook coming out of the Pacific must navigate at least eight dams; four on the Columbia and four on the lower snake. These are the four that would likely come down first. But removing a dam takes an act of Congress and meet stiff resistance from special interests like wheat farmers who need dams and locks to float their crop to market.

And since the Bonneville Dam alone can power a city the size of Seattle carbon-free, the debate divides lovers of wildlife on all sides.

Bonneville Power Administration Fish Operations Manager Jason Sweet said, “I think we’re trying to do our best to improve conditions through the migration channel, through the river for the salmon, trying to make sure that power and fish can coexist here in the Columbia Basin.”

But 13 species of fish remain threatened or endangered, even though the federal government has spent over $16 billion trying to make dammed rivers more fish-friendly.

“Yes, the salmon can cross the fish ladders, but the river, the Columbia River is too hot. The reservoirs behind the dams have caused this hot water problem because they’re stagnant, absorbing a lot of solar radiation,” Vandenheuvel said. “And then couple that with climate change and climate changes, pushing that over the edge to make the river too warm for salmon to survive.”

And it’s not just the rivers. Scientists are worried that the infamous “blob” of warm water off the Washington/Oregon coast is back.

Nick Bond, a climate scientist with the University of Washington and NOAA, said, “And so we’re kind of wondering, ‘Wow, is this happening again?’ And it’s kind of alarming because it’s so close on the heels of that past event.”

Dams have long been concrete symbols of human ingenuity but with entire ecosystems in hot water, how much longer can they stand?