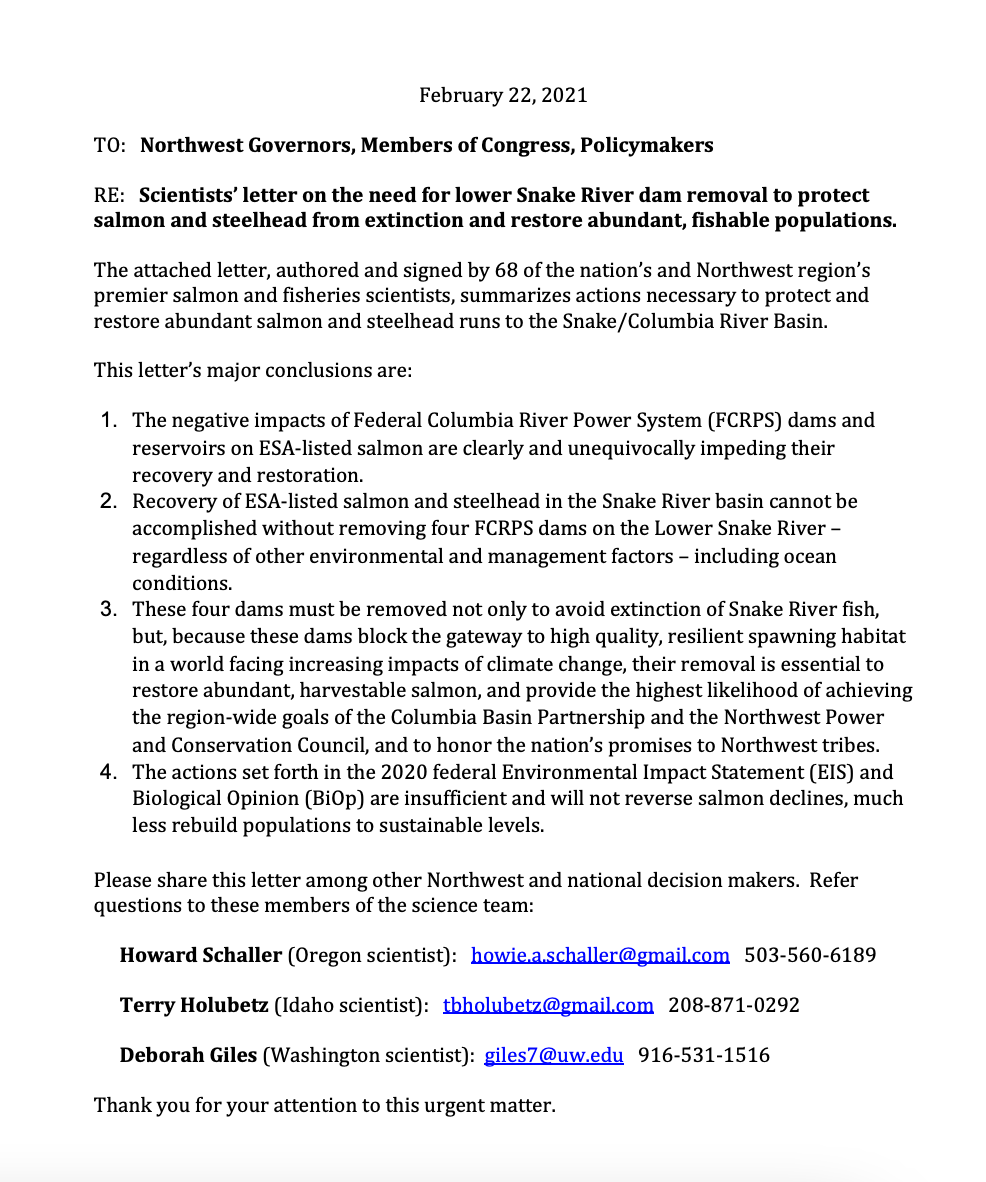 Another set of scientists, this one more than five-dozen deep, is sounding the alarm over Snake River salmon and steelhead, saying if the imperiled fish are to be saved, the four lower Snake River dams must go.

On Monday, 68 fisheries researchers from the Pacific Northwest released a letter penned to the region’s congressional delegation, governors and fisheries policymakers methodically making the case for
breaching the dams.

“This scientific recommendation wasn’t taken lightly. This is relying on a review of a large preponderance of information that a bunch of us analyzed over and over again over the years,” said Howard Schaller, a retired fisheries research biologist who worked for the U.S. Fish and Wildlife Service.

They compared the lifecycle survival, known as smolt-to-adult survival rates, of Snake River salmon and steelhead, and note the runs which must pass eight dams as they migrate to and from the ocean have lower survival rates than similar stocks in the Columbia Basin that only have to make it past four or fewer dams.

For example, wild steelhead from the John Day River in Oregon have an average smolt-to-adult return rate of 5 percent and wild chinook from the same river have a survival rate of 3.6 percent. The Northwest
Power and Conservation Council has set a survival goal of 2 percent to 6 percent for anadromous fish runs from the Snake and Columbia rivers. At 2 percent, the runs replace themselves. At an average of 4 percent,
they grow.

But the smolt-to-adult return rate for wild Snake River steelhead is 1.4 percent, below replacement level, and for wild spring and summer chinook, it is just 0.7 percent.

The difference, they say, is caused by the number of dams and reservoirs each run encounters during juvenile outmigration. For the fish from the John Day River, it’s three dams. Snake River fish must pass eight dams. At each one, they face hardships, including delays caused by slowed water velocity, predation, injury and stress. The scientists point to research that indicates many of the young fish that make it past each of the eight dams succumb from delayed mortality, the result of accumulated stress and injuries incurred along the way.

“When all of the existing credible scientific evidence is taken into account, it is clear that removing the four lower Snake River dams, with adequate spill at the remaining lower Columbia River dams, is necessary to restore Snake River salmon populations,” they write.

The work they cite was looked at during last year’s Columbia River Systems Operation Environmental Impact Statement, authored by the Army Corps of Engineers, Bureau of Reclamation and Bonneville Power Administration. The federal agencies concluded removing the four lower Snake River dams would produce the highest likelihood of saving the fish. But the agencies instead chose a plan that calls for water to be
spilled at each of the dams during the juvenile outmigration period.

“They basically came to the conclusion themselves that breaching was the action that had the highest benefit,” Schaller said.

Terry Holubutz, a retired fisheries researcher and manager who spent most of his career with the Idaho Department of Fish and Game, said dam breaching would allow more wild salmon and steelhead to survive
and return to Idaho’s mostly pristine spawning habitat. That is critical, he said, now that ocean conditions are poor and expected to be influenced by climate change.

“I think anyone that goes through the data that has been developed over the years would say that survival of downstream migrants is the key factor for the Snake River stocks, and if we (breach the dams) that our fish would be in a better position to handle the ocean conditions right now. So our group feels strongly this is something we have to do.”

Last week, a study by federal fisheries scientists said Snake River chinook face grim odds which will grow substantially worse with climate change. Some of those who worked on the study said dam breaching should be considered while others said measures to improve conditions in the ocean are more important.

Earlier this month, Idaho Congressman Mike Simpson released a $33 billion concept that calls for breaching the four lower Snake River dams and mitigating affected communities and industries. The plan has been endorsed by many conservation organizations but criticized by some local government officials, farmers and shippers.

Holubutz said Simpson’s blueprint is a promising development that the region should look at and help shape so that it accomplishes its goal of saving the fish and offsetting the negative impacts of breaching.