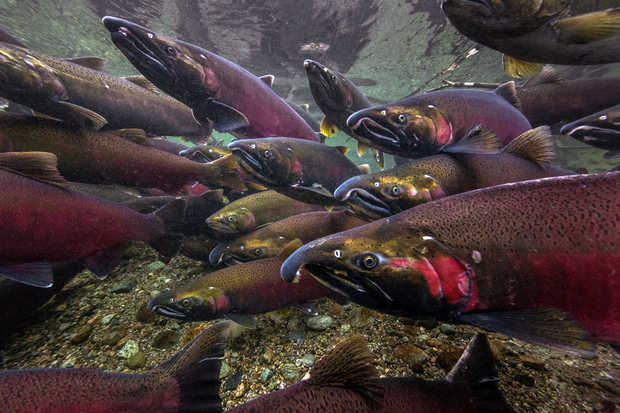 An article published Wednesday in the scientific journal PLOS One
predicts sockeye survival could decline by 80 percent as the effects of climate change alter inland habitat.

Snake River sockeye that return to Redfish Lake in the shadow of the Sawtooth mountains are federally protected as an endangered species. They were so close to blinking out in the early 1990s that the few returning adults were put in a captive breeding program to ensure survival of the species.

The conservation hatchery program gave enough of a boost to sockeye numbers to allow the species to take a step back from the brink of extinction. A small number of Snake River sockeye spawn and spend their entire lives in the wild. But most continue to be bred in either the emergency captive breeding program or a new hatchery in southeastern Idaho.

The goal of the new hatchery is to release 1 million smolts per year and dramatically increase adult returns. Idaho Fish and Game officials are still working out the kinks of the new facility, and while sockeye returns increased this year, they have yet to meet expectations.

But long-term survival of the species will require it to be able to adapt to a changing and warming climate. For example, there is evidence that upper Columbia River sockeye have started to return earlier in the spring, which would help them avoid some of the more dangerous water temperatures.

“If they can reestablish a wild population, I think that is their best hope,” said Lisa Crozier, lead author of “Snake River sockeye and Chinook salmon in a changing climate: Implications for upstream
migration survival during recent extreme and future climates.”

The article by Crozier, a researcher at the National Oceanic and Atmospheric Administration Fisheries’ Northwest Science Center at Seattle and her colleagues, says Snake River spring and summer chinook appear to be much more resilient to climate change, but even so, survival of the popular angling target could drop 4 percent to 15 percent.

The researchers, Jared E. Siegel, Lauren E. Wiesebron, Elene M. Trujillo, Brian J. Burke, Benjamin P. Sandford and Daniel L. Widener, tracked historic returns of both species under a range of climatic conditions. They then modeled future returns, also on a wide range of conditions, only this time influenced by a warming climate that is expected to increase water temperature and reduce summertime stream flows. In 2015, a year marked by extremely low winter snowfall and spring runoff that was followed by an early arrival of hot summer temperatures, most of the returning adult sockeye perished in the Columbia and Snake rivers.

Crozier and colleagues said those kinds of conditions will be more common in the future.

The researchers noted the Snake River sockeye are less resilient than sockeye that return to the upper Columbia River. That is likely because they have lost some of their previous life history diversity because of their dependence on hatchery production. Crozier said in general hatchery fish are less hardy than wild fish.

“They just don’t survive as well as wild fish all across the board,” she said. “This is a population that has been in captive broodstock since the 1990s.”

Chinook at risk, too

While the perils of climate change will not alter adult migration conditions as much for spring and summer chinook, Crozier said those fish will be challenged by warmer water and lower flows in tributary streams before spawning. Spring and summer chinook return from about April through June but don’t spawn until about August. In between, they must survive in the small streams where they ultimately spawn. That may be one area where humans can help both species. There are ongoing efforts to improve inland spawning and rearing habitat. That work often includes efforts like restoring floodplains and riparian vegetation, and the creation of deeper pools. That can help provide pockets of cooler water and increase stream flows that are important for both adult fish and their offspring.

“What we need is a real quantitative analysis of where would (habitat restoration) be most beneficial. We already know a few obvious ones. We really need a basinwide — like a whole Salmon River basinwide — perspective of where can we get the most benefit for the effort and the cost. And it needs to be very climate change focused, because this is a very real change that is happening very rapidly, and we don’t have time to waste.”