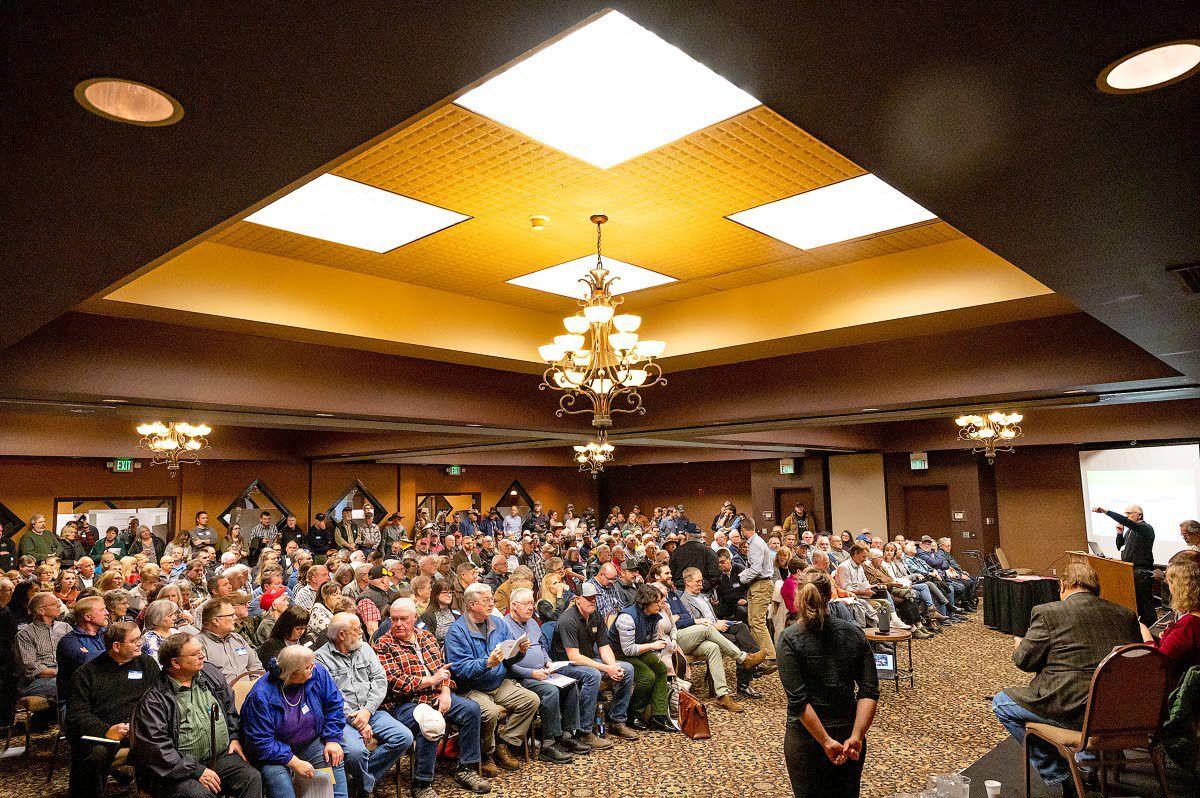 More than 300 people turned out to listen to a dialogue about the future of the lower Snake River, its dams, threatened salmon and steelhead runs, agriculture and power production at a meeting in Clarkston on Tuesday evening.

The burgeoning discussion between stakeholders representing various interests was the result of a 115-page draft report commissioned by Washington Gov. Jay Inslee and his Orca Task Force that focused on the attitudes of Washington residents on the dams and fish.

The report will help guide Inslee’s comments on a coming federal Environmental Impact Statement on the Columbia and Snake River Hydropower System and its effects on protected salmon and steelhead. The EIS will examine, among other things, whether the dams should be breached to save the ailing fish runs.

Consultant Jim Kramer gave a brief summary of the report’s findings before overseeing the discussion between people who have often battled over the best way to save the fish. Much of that two-decade-plus-long debate has revolved around dam breaching, an action supported by salmon advocates. Breaching would help the fish migrate to and from the ocean, but would also end use of the river by farmers to get their crops to overseas markets and reduce the hydroelectric capacity of the Pacific Northwest.

Kramer asked panelists how the process might be moved forward. As the discussion evolved beyond normal talking points, some of the panelists began to open up and agree that listening to each other’s needs could produce results.

Bill Newbry, president and chief operating officer of the Pacific Northwest Farmers Cooperative, said if farmers and shippers are to be brought to the table and entertain the possibility of breaching the dams, they first need to see an upgrade in rail and highway infrastructure.

Sam Mace, of the Save Our Wild Salmon Coalition, said face-to-face talks are helpful and she praised Inslee and other political leaders for recent leadership. But she said people at lower levels can also be effective by meeting face to face.

“I think that kind of dialogue is important,” she said.

Dustin Aherin, a river rafting outfitter from Lewiston who runs trips on the Middle Fork of the Salmon River that has some of the best salmon and steelhead habitat in the region, agreed that dialogue can move the dial.

“We haven’t gotten very far in the recovery process by arguing with one another and developing different plans,” he said. “People like us, the users and affected people, need to realize my actions can adversely affect someone else. We need to work together to find middle ground that keeps my industry whole and other industries whole.”

Birgit Koehler of the Bonneville Power Administration noted the Snake River dams are part of the region’s energy mix and are vital at certain times of year. She said people sometimes say it would be easy to replace the power produced at the dams with wind and solar sources but they don’t acknowledge that wind and solar is also being tapped to replace coal and natural gas-generating plants that are being retired.

“One of my concerns is we do have to have an understanding of what the trade-offs are,” she said.

But Nancy Hirsh of the Northwest Energy Coalition said the power puzzle can be reconciled.

“The energy piece is solvable, there are other sources, other ways to operate the system,” she said.

Joel Kawahara, a commercial fisherman from Quilcene, Wash., said people need to take a long view of the problem.

“We are lacking overall vision of what we want the region to be,” he said. “Do we want an economy to be accommodating to people on the east and west sides equally? I think yes.”

Alex McGregor of the McGregor Co. noted removing the dams and barge transportation would require 43,000 more rail cars and as many as 167,000 trucks. He stressed the need to follow sound science but expressed optimism that solutions can be reached.

“It’s too easy to oversimplify the issues, it’s too easy to try to take on the matter through lawsuits and angry dialogue. The more we can work together and recognize the challenge we face, the better off we are,” he said.

David Johnson, manager of the Nez Perce Tribe Fisheries Department, said a lot of good work has been done to improve imperiled habitat and to raise and release hatchery fish. But he also noted there are wilderness areas that hold pristine spawning habitat that is under used by the fish. He noted that tribal members have sacrificed more than other regional players who are now being asked to compromise.

“Some livelihoods have been held as sacrosanct while others have not been,” he said.