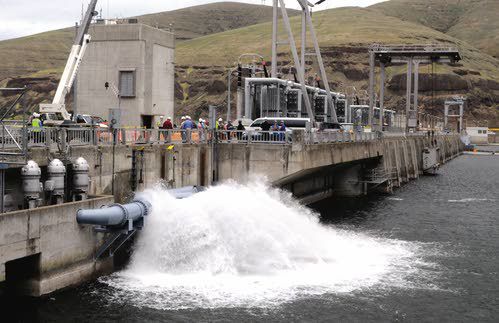 Study says it's possible, suggests renewable energy sources that could
replace dams By ERIC BARKER of the Lewiston Morning Tribune Apr 4, 2018 A study commissioned by the Northwest Energy Coalition shows that a combination of renewable energy sources, conservation and better management of energy use could replace electricity generated by the four lower Snake River dams without significantly increasing costs or emissions. The group says the study can be used as a template for federal officials who are in the midst of a court-ordered look at how to
operate the dams and recover wild salmon and steelhead populations. That look is expected to include a dam-breaching analysis. "The study shatters the myth that replacing the lower Snake River dams and restoring our wild salmon would compromise the reliability of our power system and cause major increases in rates and greenhouse gas emissions," said Nancy Hirsh, Northwest Energy Coalition executive director. The group is described as "an alliance of about 100
environmental, civic and human service organizations, progressive utilities, and businesses in Oregon, Washington, Idaho, Montana and British Columbia" on its website. Many salmon advocates have called for Ice Harbor, Lower Monumental, Little Goose and Lower Granite dams on the lower Snake River to be breached. Doing so would restore that portion of the river to free flowing and eliminate the harm they cause to both juvenile and adult fish as they migrate to and from the ocean. Many stocks of wild Snake River salmon and steelhead are protected by the Endangered Species Act. Critics of breaching, including officials at the Bonneville Power Administration and U.S. Army Corps of Engineers, have said dam removal would be too costly, in part because it would reduce electricity generation at the dams that likely would have to be replaced by natural gas-fueled energy plants. A 2016 BPA fact sheet said switching to low greenhouse gas emission hydropower, produced at the dams with electricity from natural gas generators, would increase emissions by 2 million to 2.6 million metric tons per year. That is equivalent to adding 421,000 passenger cars to the region's highways annually. In addition, it said switching to natural gas would increase power costs by $274 million to $372 million per year. The same BPA report suggested wind and solar power are too unreliable to be counted on as replacements for the hydropower produced at the dams. For example, on calm or cloudy days, the report said, other sources would be needed to make up for the lack of renewable generation sources and hydropower produced at the dams is exceptionally suited to do that. The dams also are remarkably reliable, according to the BPA report, and able to generate power quickly at times of peak demand or
when other generating sources unexpectedly go offline. The report also indicated the dams are important for keeping the region's transmission lines operating reliably and efficiently. But the new analysis, conducted by Keegan Moyer of the independent consulting firm Energy Strategies, says a combination of wind and solar generation in combination with conservation, storage and managing electricity consumption to transfer some use to parts of the day when demand is lower - known as demand response - could replace power generated by the dams within the next 10 years. Doing so would not require construction of new natural gas plants, according to the report, and would be just as reliable, possibly more reliable, and provide the same benefit to transmission lines. Under one scenario, replacing the dams with renewable sources and conservation could cause a 1 percent increase in greenhouse gas emissions and cost ratepayers an additional 4 cents per day. If states like Washington and Oregon were to institute measures such as a tax on carbon use, the analysis says greenhouse gas emissions could be reduced. The study did not factor in the actual cost of breaching the dams, estimated at $1.3 billion to $2.6 billion by the BPA in its 2016
report. But Northwest Energy Coalition spokesman Sean O'Leary said his group released a report in 2015 that showed breaching costs would be outweighed by forgone future expenditures on the dams, such as the expense of refurbishing hydroelectric turbines and annual salmon and steelhead mitigation programs. "In that study we did look at the cost of dam removal and the associated savings or avoided costs. At that time, the avoided costs were greater than the costs of dam removal, providing a net benefit." O'Leary also said the study only analyzed the level of renewable sources and conservation needed to replace power generated at the dams. He said the federal government's ongoing analysis of the dams, and possibly breaching them, may well produce a mix of renewables and conservation that performs even more efficiently and at an even lower cost. "We hope they will seize on that opportunity to do that extra examination to see just how good we can make this," he said. The study is available at www.nwenergy.org.