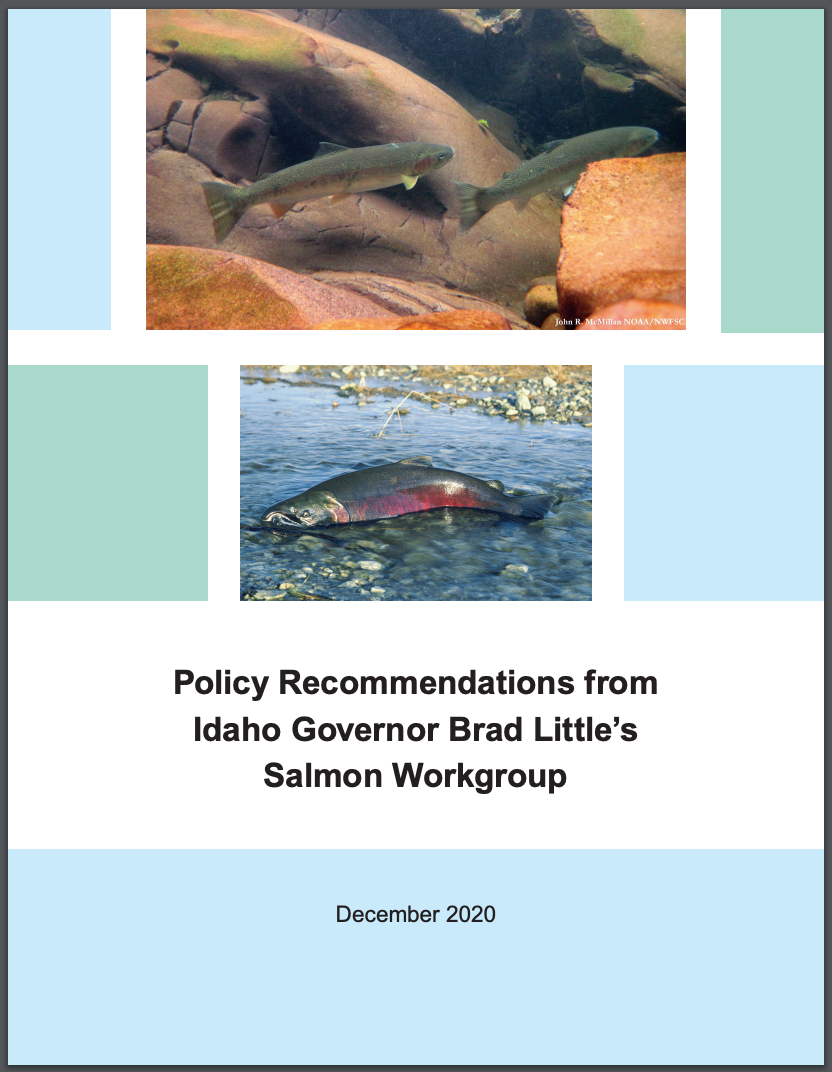 But members of the collaborative group that hashed out the document over the past 18 months acknowledged their policy prescriptions, while likely to be beneficial, are insufficient to reach the lofty goal. Achieving true recovery of Idaho’s prized anadromous fish runs will require work that reaches far beyond the state’s borders, according to the report delivered to Little on Dec. 31 and quietly released to the public over the weekend.

“If we are to enjoy abundant, sustainable and well-distributed populations of salmon and steelhead, more conversations are necessary. More collaboration will be needed. More work must be done,” reads the introduction to the 25-page report. “We encourage a renewed evaluation of these policies over time to ensure that the goals of the workgroups are being accomplished.”

Little convened the group in 2019 and tasked its members with crafting recommendations to help improve salmon and steelhead runs that have been protected under the Endangered Species Act for about 30 years. The runs have performed unusually poorly over the past four years and led to fishing restrictions and some outright closures.

The report recognizes the primary importance of salmon and steelhead to the Native American tribes of the Columbia Basin; the need to make the state’s river dependent industries, communities and economies whole; and the need for even more actions to save the fish and restore their habitat as overarching principles.

Group members discussed dam breaching at length during the deliberations but were unable to reach consensus on the controversial topic. Instead, they supported a suite of recommendations designed to lessen the many negative impacts of dams and reservoirs, improve habitat, make sure hatcheries produce fish for harvest without harming wild stocks, that harvest is managed equitably throughout the Columbia River basin, that species that prey on salmon and steelhead are reduced, and that steps are taken to address climate change and its impact on the fish.

“I think a significant thing that the workgroup talked about and learned and affirmed is that what Idahoans want is to recover real abundance,” said Justin Hayes, executive director of the Idaho Conservation League. “Idahoans don’t want to shoot for the lower bar of (Endangered Species Act) delisting. That is insufficient to meet the needs of Idahoans.”

For example, Snake River wild spring chinook could be removed from federal protection if average annual returns increased from about 7,000 to 33,500. But the workgroup adopted 159,500 as its goal, a target first outlined by the Columbia River Partnership that represents only about 16 percent of the historical average run size of about 1 million fish.

Because the goals are much more robust than those required by the federal government and will be difficult to reach, the group was clear that its recommendations should not be viewed as a recovery plan. Still, many said if they are implemented, the policies would be helpful.

“There isn’t any one measure I would point to and say, ‘By golly, I’m sure glad this is in there, this will make a difference,’ ” Port of Lewiston manager David Doeringsfeld said. “I think you have to take the whole suite of measures there and do (your) best to implement everything that is in the report and I do believe it will make a difference.”

But some members wanted to push harder. Richard Scully, of Lewiston, said the emphasis on consensus and collaboration eliminated the aggressive measures needed to reach the group’s stated goals. The report adopts the goal of achieving a smolt-to-adult return rate of 2 to 6 percent annually, with an average of 4 percent as critical to rebuilding the imperiled runs.“The only way I have seen that can be done is to breach the four lower Snake River dams,” he said. “To me it was very frustrating that the policy recommendation I felt would have the most meaning was one we couldn’t include.”

Joseph Oatman, deputy program manager and harvest manager for the Nez Perce Tribe’s Department of Fisheries Resource Management, backed the plan but urged Little to avoid simple endorsement of efforts that have already proven insufficient to lead to recovery. He noted the tribe believes restoring the lower Snake River by removing the four dams and at the same time making investments in communities that could be harmed by the action holds real promise.

“It is one of a very few actions left to try that will provide major, positive improvement for these fish. Therefore, restoring the lower Snake River and ‘making people whole’ remains a focal point for the nation and region to address,” he said.The report is available for review at bit.ly/2MqJtXK.