By Eric Barker of the Tribune 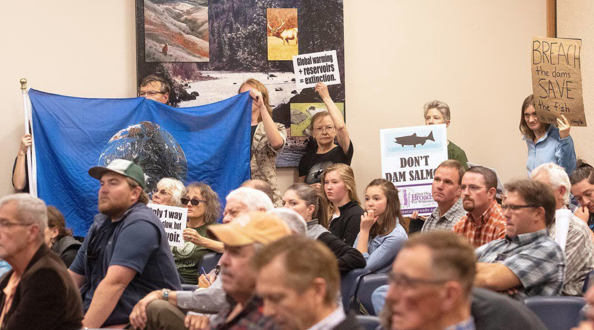 Members of Idaho’s Salmon Working Group continued to feel each other out Friday to determine if, when and how they might eventually tackle controversial issues such as the ever-present question about keeping or breaching the four lower Snake River dams.

Breaching was mentioned during the daylong meeting, but did not dominate the group’s discussion at the Idaho Department of Fish and Game office in Lewiston. Instead, group members, after hearing reports from the Nez Perce Tribe, discussed more foundational and mundane subjects, such as how to formulate agendas and what sorts of goals and timelines they should set for their future proceedings.

Near the end of the day, the meeting was injected with passion when the group listened to comments from members of the public. About three dozen activists holding signs advocating for dam breaching filled the room. Those who addressed the group covered the well-known talking points both for and against dam breaching.

Farmer Matt Mosman said the barging system provided by the dams on the Snake and Columbia rivers is vital to his family’s operation on the Camas Prairie.

“The dams to us are extremely important for the transportation of our wheat,” he said. “There is no cleaner or faster way for us to do it.”

Julian Matthews, a member of the Nez Perce Tribe from Pullman, said the current approach of trying to rescue imperiled runs of salmon and steelhead by restoring habitat and reforming harvest and hatchery practices isn’t enough.

“I just don’t see it working. I don’t believe (the fish) are going to come back with the current way it’s being managed. I think it’s really critical the dams are put on the table.”

Fishing outfitter Jason Schultz didn’t comment on breaching but said people in his industry are reeling. Earlier in the day, the Idaho Fish and Game Commission closed steelhead fishing on the Clearwater River and the Snake River near Lewiston.

“I want you to hear my voice and to know I’m scared,” he said. “We need your help and we need our fish back.”

Gov. Brad Little convened the salmon working group and tasked its members, which include anglers, environmentalists, tribal members, farmers, port managers and power interests, to craft a series of policy recommendations aimed at spurring long-running efforts to save the state’s spring, summer and fall chinook, sockeye and steelhead. The runs have bounced up and down since coming under the umbrella of the Endangered Species Act in the 1990s but have turned south during the past three years. Fishing seasons have been scaled back or canceled in response.

The group’s Lewiston meeting was just its third since forming earlier this year. About half the day was dominated by presentations by the Nez Perce Tribe’s fisheries program. Joseph Oatman, a member of the group and deputy program manager and harvest manager for the tribe’s Department of Fisheries Resources Management, told his fellow group members the important role salmon and steelhead play in the lives of tribal members.

He said Nez Perce people once built their diets and economy around salmon, but with today’s poor runs, that is no longer possible.

“We have gone from a time in our history where each and every member utilized about 80 salmon to something that is really less than one salmon per person.”

Emmit Taylor, head of the tribe’s watershed division, detailed the work the tribe is doing to restore degraded salmon and steelhead habitat in wide swaths of Idaho, Washington and Oregon.

“We don’t focus on the river itself, we concentrate on the whole watershed,” he said.

David Johnson, director of the tribe’s Department of Fisheries Resources Management, said the tribe works to fix problems that others have left on the landscape. That includes things like obliterating old forest roads, replacing inadequate culverts and cleaning up mining waste.

“We still see breaching as the most viable means to restoring those populations,” he said.

During time allocated for discussion, group members debated how the committee should function, who it should seek out for advice and how it might one day deliver a product to Little. They were able to agree on a mission statement: “Develop policy recommendations for Gov. Little through a collaborative, consensus driven, public process to restore abundant, sustainable, and well distributed populations of salmon and steelhead in Idaho for present and future generations, while recognizing the diverse interests of stakeholders throughout the state.”

They now have their eyes set on developing goals and objectives that will help them agree on policy recommendations. But to do so they need to have more discussions and hear from more experts.

They struggled to determine how to decide who they should invite to speak at future meetings and what they should discuss. The group seemed to agree they should hear a report from the Columbia Basin Partnership Task Force, a 3-year-old federal effort that has tackled some of the same issues. Many members of Little’s group also serve on the Columbia task force.