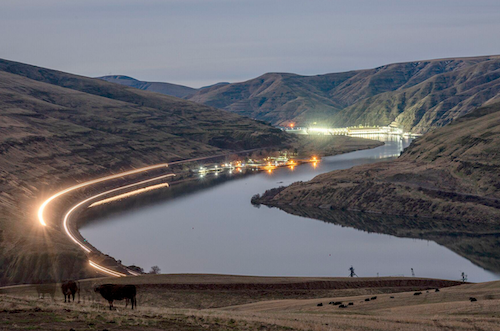 In a bid to recover Snake River salmon and end decades of conflict, U.S. Rep. Mike Simpson is proposing a $33 billion infrastructure and community investment strategy that would breach the four lower Snake River dams and reorder much of the fish, energy and commodity transportation systems of the Pacific Northwest.

If turned into legislation, passed and implemented according to Simpson’s timeline, Lower Granite Dam would be breached in the summer of 2030 and the river that was swallowed by slackwater 55 years earlier would reemerge. The breaching of Little Goose, Lower Monumental and Ice Harbor dams would follow and the entire stretch of the river would return to its free-flowing state by 2031.

The eastern Idaho Republican representing Idaho’s 2nd Congressional District announced his intentions in a recorded video posted to his website Saturday night -- nearly two years after he vowed at an Andrus Center conference in Boise to live long enough to see Redfish Lake once again team with spawning sockeye. His chief of staff Lindsay Slater shared the concept with dozens of stakeholders and the Lewiston Tribune prior to the announcement.

According to many fisheries scientists, removing the dams will boost survival of protected Snake River salmon and steelhead and allow the depleted runs to rebuild. Breaching would also help Pacific lamprey, endangered southern resident killer whales in the Puget Sound region and be a boon to fishing economies and cultures from Astoria, Ore., to Stanley, Idaho.

But the loss of slackwater would turn some industries upside down and dramatically reshape the waterfronts of Lewiston and Clarkston. Tug-and-barge transportation between Lewiston and the Tri-Cities would cease and hydropower would no longer be produced on the lower Snake River.

Simpson is proposing mitigation for disrupted economies and communities. Lewiston and the surrounding area, along with agriculture, transportation, tourism and energy sectors would receive billions of dollars in funding to help with the transition.