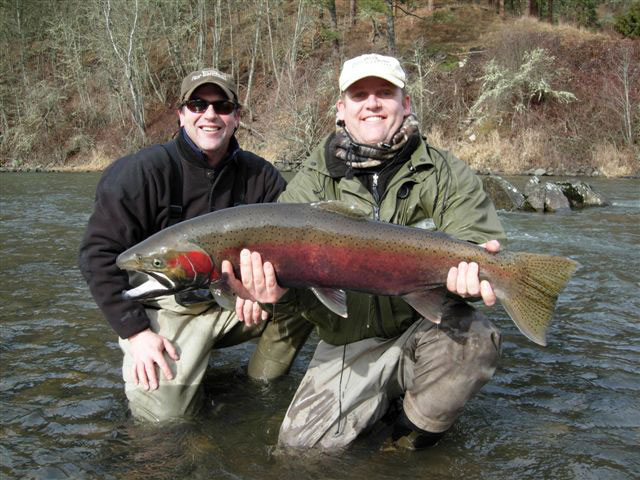 This is the second of a two-part series on the suspension of the steelhead fishing season on Idaho Rivers.

The fight over Idaho’s steelhead season is being played out at least partially in the court of public opinion with some people insisting fishing is being shut down over a technicality while others say there is a sound conservation reason for suspending angling.

Idaho is closing the season, effective Saturday, to stave off a threatened lawsuit by five conservation groups. The Conservation Angler, Wild Fish Conservancy, Idaho Rivers United, Friends of the Clearwater, Snake River Waterkeeper, Wild Salmon Rivers and the Wild Fish Conservancy said last month they would sue the state if it didn’t close fishing or agree to measures to protect wild fish. Idaho Rivers United pulled out of the group on Friday.

Idaho’s incidental take permit expired eight years ago, and the federal government has only recently begun to review the state’s application for a new one, which was first submitted in 2010. The permit allows a small percentage of wild steelhead listed as threatened under the Endangered Species Act to be killed during the state’s hatchery steelhead fishery.

The new permit is not expected to be approved until March. Without a valid permit, leaders of the Idaho Department of Fish and Game and its governing Idaho Fish and Game Commission opted to close the season. They said they would almost certainly lose if a lawsuit were filed and likely have to pay the conservation groups’ legal fees. They also said a judge could force the state to adopt regulations designed to protect wild fish that they believe are unwarranted.

Some of the conservation groups insist closing the season, or adopting more stringent fishing regulations, is needed. The steelhead run is one of lowest on record. You have to go back to 1994 to find a year when fewer steelhead passed Lower Granite Dam, the last dam fish must negotiate before returning to Idaho waters. The 10,600 wild fish that have passed the dam this year make about 22 percent of the overall run.

Conservationists say that number is so low that every wild fish is precious, and extreme steps should be taken to ensure each one survives to spawn.

“Our feeling is with the small number of fish that Idaho needs to do something to reduce encounters,” said David Moskowitz, executive director of the Wild Fish Conservancy. “I think there are a number of things we suggested to the department, and they took those off the table in our discussions.”

In settlement talks, the groups asked the state to take steps such as forbidding fishing for steelhead from boats, banning bait or the use of multiple hooks and treble hooks on lures and not allowing people to briefly remove wild fish from the water for pictures, sometimes called “hero shots.”

Much of the debate boils down to the degree to which wild steelhead are harmed and how many ultimately perish after being caught and released by anglers. It is a difficult thing to measure, and there is a wide range of mortality estimates connected to numerous studies on the issue.

Everyone agrees that fishing does pose a threat to wild fish, even though anglers are required to release them unharmed. Idaho Fish and Game biologists say on average about 3.2 percent of the wild steelhead run dies after being caught and released. They arrive at the number by assuming that about 5 percent of fish caught and released perish and about 64 percent of wild fish in the state are caught during steelhead fishing seasons.

Lance Hebdon said the 5 percent mortality estimate, which has its origins in a Canadian study, is widely used in the Northwest and has been endorsed by National Oceanic and Atmospheric Administration Fisheries, but the federal agency has also said the topic deserves more inquiry.

“We haven’t seen anything specific in Idaho or other studies to suggest 5 percent is not a reasonable average,” Hebdon said.

Some people point to analyses conducted by the Oregon Department of Fish and Wildlife on the Deschutes River that showed wild fish are caught at a higher rate than hatchery fish, even though wild fish only account for about a quarter of the overall steelhead run there. In that work, a biologist looked at the number of hatchery and wild steelhead anglers reported catching on the Deschutes River and compared it to the number of hatchery and wild fish that passed over an upstream weir. It found more wild fish were caught than hatchery fish.

Hebdon said he is aware of the work but not aware that it is a published study or endorsed by the Oregon Department of Fish and Wildlife as an official finding. He also said many steelhead from the Snake River pull into the Deschutes because of its cold water and then ultimately leave. That could boost the number of wild fish available to anglers, even though many of those fish exit the river before passing the weir.

“I don’t know how much credence to give it,” he said.

People like Don Chapman, a retired fisheries biologist and former University of Idaho professor, are critical of both the 5 percent mortality rate estimate and the department’s belief that anglers hook hatchery and wild fish at about the same rate.

“It’s been hypocritical as far as I’m concerned to use an out-of-basin 5 percent figure and then willfully ignore the Oregon Department of Fish and Wildlife (work) on the Deschutes River. It has a multiyear study that shows wild fish are much more aggressive in attacking lures and flies than are hatchery fish. Wild fish are aggressive, and that encounter rate for hatchery fish is irrelevant to wild fish.”

Chapman also said the state doesn’t know how many times wild fish might be hooked in a season. He would like the state to adopt a 10 percent catch-and-release mortality rate and adopt more restrictions to protect wild fish.

Idaho’s willingness to let anglers briefly remove wild fish from the water for photographs is another sticking point with people worried about catch-and-release mortality. The state allows the practice, so people can capture memories from their trips. Hebdon said studies conducted by the department show brief exposure to air by wild fish is not a significant cause of mortality. The state has done research on steelhead in the South Fork of the Clearwater River and on cutthroat trout in the South Fork of the Snake River that showed lifting fish from the water did not affect their reproductive success.

A recent study on the Bulkley River in British Columbia, Canada, had mixed results that can be used by both camps in the debate. It found that about 5 percent of caught-and-released steelhead died within three days of the experience. Most perished from deep hooking or hooking in the tongue. The study continued to track those fish and found that about 10 percent did not survive over winter and about 15 percent died prior to spawning.

It also showed that steelhead exposed to air fell back farther down river than steelhead that were released without being removed from the water. However, within two weeks of release the fish exposed to air had resumed their upstream migration and were on par with fish that hadn’t been exposed to air.

“None of the angling-related variables had any apparent long-term consequences on the migration rate, or pre-spawn distances to potential spawning sites,” the authors wrote.

Idaho proponents of banning removal of wild fish from the water point out the Bulkley is a northern river with much lower water temperatures, especially early in the steelhead season. They say if 5 percent of steelhead there perish after being released, the mortality rate must be higher on the Snake River and its tributaries.

The 10 percent overwinter, and 15 percent pre-spawn mortality sounds an alarm from some Idaho anglers and biologists worried about the effects of catch and release. However, study author William Twardek, a doctoral student at Carleton University in Ottawa, Ontario, Canada, said researchers don’t know what the overwinter and pre-spawn mortality rate is for fish that aren’t caught and released. He also said that they don’t know to what degree angling was the cause of mortality but said it weakens them.

“They’re not themselves going to kill the fish, but it doesn’t mean it won’t have sublethal impact on the fish,” Twardek said.

LuVerne Grussing, a board member of Idaho Rivers United and avid steelhead angler who lives near Spalding, said the groups involved in the potential lawsuit are not unified in what they think could be appropriate remedies.

“We don’t agree with some of our partners from the coastal areas about potential or possible mitigation that could be done short of closing the season,” Grussing said. “We certainly think if they would just make changes to the regulations a little bit to make it ‘don’t take wild fish out of the water and use only single-barbless hooks’ that would make a big difference in terms of potential mortality.

Many people believe treble hooks — a hook with three points on a single shank — and multiple hooks on one lure, increase the chances of injury to fish and increase the time it takes to release them.

“I can’t imaging that Fish and Game wouldn’t do that as a mitigation factor if it were proposed to keep the season open,” he said.

Fish and Game officials rejected a larger set of potential actions that included regulations that would require single-barbless hooks and forbid removing wild fish from the water, in failed settlement talks. Those measures also included a ban on bait and fishing from boats.

“That is just not something IRU ever did,” he said. “They would be opposed to that.”