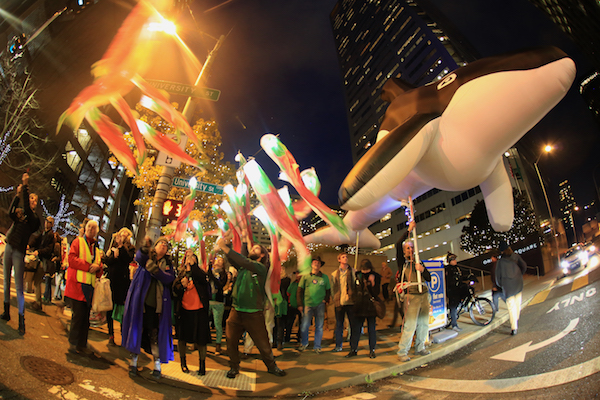 A coalition of environmental and fishing groups signaled Friday they plan to return to court in an effort to invalidate the federal government’s latest salmon and dams plan.

The groups, which include the Idaho Conservation League, Idaho Rivers United, National Wildlife Federation and the Northwest Sportfishing Industry Association, sent a 60-day notice of intent to sue to the Army Corps of Engineers, U.S. Bureau of Reclamation and the Bonneville Power Administration. They claim the government’s recently completed plan to operate dams and reservoirs on the Snake and Columbia rivers violates several provisions of the Endangered Species Act.

The court-ordered plan that was finalized in September relies on spilling water at the dams to help juvenile fish on their way to the ocean. But it also gives the agencies the ability to divert more water through hydroelectric turbines when electricity demand, and thereby prices, are high.

An environmental impact statement associated with the plan explored the idea of breaching the four lower Snake River dams and found that action would improve conditions for threatened and endangered wild strains of salmon and steelhead. However, the agencies also said that breaching would be too costly, since it would end barge transportation on the river and reduce hydropower generation.

The environmental and fishing groups, along with the Nez Perce Tribe and state of Oregon, successfully challenged five previous plans and said the latest plan differs little from those earlier efforts.

“The oversight of the federal courts has been critical to ensure that our agencies and political leaders commit to salmon recovery in the Columbia Basin,” said Tom France, regional executive director of the National Wildlife Federation. “Restoring the magnificent runs of salmon in the Columbia and Snake rivers remains one of the National Wildlife Federation’s highest priorities.”

The federal agencies and supporters of the four lower Snake River dams and the greater Columbia River hydropower system were critical of the resumption of litigation and said it runs counter to calls for regional collaborative salmon recovery talks. Earlier this month, the governors of Idaho, Washington, Oregon and Montana announced their intention to convene collaborative talks on salmon recovery. Some of the groups that said they plan to sue the government had also lobbied for the talks.

Matt Rabe, a spokesman for the Corps, said the government’s plan, known as a record of decision, should not be viewed as the end point of federal involvement in salmon recovery and that the agencies recognize the call for talks on salmon recovery, energy and economics in the region.

“The Corps does not believe that continued court actions are productive to continuing this dialogue,” he said.

Kristin Meira of the Pacific Northwest Waterways Association said litigation “only serves to divide the many entities that must work together, and delay the real work we must accomplish to achieve our mutual goals.”

Kurt Miller of the Northwest River Partners said the groups who intend to sue are singularly focused on dam breaching, are overlooking climate change and its negative impact on salmon runs across the Pacific Ocean, and hydropower’s role in reducing carbon emissions.

“We are hopeful the organizations behind the lawsuit will reconsider and move back to the collaborative process they had previously publicly supported,” he said.

Justin Hayes of the Idaho Conservation League at Boise said the groups’ desire for talks doesn’t mean they are willing to accept a bad salmon and dam plan.

“We are very earnest in our interest in regional collaboration and working to restore fish and make communities whole but as we do that, we mustn’t let the federal agencies produce plans that fail Idaho.”

American Rivers, one of the groups that plans to sue over the salmon and dams plan, recently signed an agreement with the National Hydropower Association in which the environmentalists recognize a role for hydropower in fighting climate change and the industry group agreed to the need to remove some obsolete or damaging dams. Among other things, both sides pledged to work to make hydropower at dams that remain more efficient and to seek funding for river restoration.

Scott Bosse, Northern Rockies director for American Rivers, said the agreement could produce “win-win” situations but that it doesn’t mean his group has changed its view on the best way to recover Snake River salmon and steelhead.

“As far as American Rivers support for removing the Snake River dams, this agreement has no bearing on that whatsoever,” he said. “As a matter of fact, we think the case for removing those four dams has only become stronger over the past year.”