Lewiston Morning Tribune: For endangered orcas, it's the hunger games 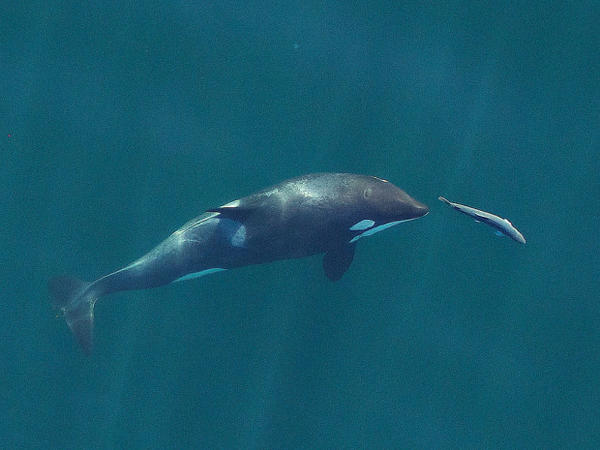 For the past few years, Idaho’s Snake River salmon and Puget Sound orcas have become linked in the decades-long battle over the fate of the four lower Snake River Dams and whether they should be removed to save the fish.

The orcas, specifically the southern resident killer whales, are in trouble and have been for some time. That came into sharp focus this summer when a member of the J-pod, a subgroup of the Puget Sound orcas, carried her dead calf for 17 days and attracted worldwide media attention.

The whales face food shortages, noise from vessels in the busy Puget Sound and the accumulation of pollutants in their body fat. All three are linked, but what it boils down to is the whales are not getting enough to eat, and what they eat is mostly salmon.

That is where salmon that spawn in the Snake River Basin come in. The whales prefer chinook salmon and feed on a number of different stocks up and down the West Coast of the U.S. and Canada. For much of the year, from spring to fall, the whales prey on chinook that return to rivers that empty into the Puget Sound and Salish Sea, most notably Canada’s Fraser River. But they also leave the inland waters in the fall to travel along the coast looking for salmon, and to a lesser degree other species, before returning in the spring.

One of the stocks the whales target during that period are those that originate from and return to the Columbia River and its tributaries. That brings in the Snake River. Orca advocates have formed a philosophical and strategic alliance with the Snake River salmon supporters who believe breaching the four dams on the lower Snake River will significantly boost the number of salmon and steelhead from the Snake River Basin. They believe, as do many scientists, that breaching will improve Snake River salmon runs enough to lead to their recovery.

Breaching: How much impact?
So how much would dam breaching help the whales? No one can say for sure, but there are two competing scientific camps at odds over which Snake River chinook run is more important to whales. Those who believe orcas are more dependent on fall chinook from the Columbia and Snake river basins tend to see less of a potential benefit from breaching, because fall chinook runs are in better shape than spring chinook runs. And the bulk of fall chinook that return to the Columbia Basin don’t originate from the Snake River.

This is the side that National Oceanic and Atmospheric Administration Fisheries, the agency in charge of overseeing efforts to stabilize and recover both the whales and the fish, has adopted. In its fact sheet about killer whales and Snake River dams, the agency says that fall chinook have done relatively well over the last decade, even though their returns have declined in the past few years because of poor ocean conditions.

“In the last decade more adult chinook salmon have returned past Bonneville Dam on the Columbia River than at any other time since the dam was completed in 1938. NOAA Fisheries has found that hatchery chinook more than compensate for fish lost to the dams in terms of total numbers of chinook available to killer whales,” the agency argues in the fact sheet.

The agency looks at the entire Columbia Basin as a place that is already doing its part to feed the whales and would like to see more improvements from other basins.

“The Columbia and Snake rivers are producing more than half of the chinook on the West Coast. This is a place the whales come because the salmon are here, not because they are missing,” said Michael Milstein, a spokesman for NOAA at Portland.

Milstein said it’s important to work on all of the stocks the whales feed on.

“They all contribute fish to the whales at different times of the year at different places,” he said. “It’s not about one river being critical. It’s about the diversity of the rivers and the stocks they produce, each one with its own life history and timing.”

Orcas: chinook specialists
One thing is certain, southern resident killer whales are chinook salmon specialists. It makes up the majority of their all-fish diet, and the whales are not getting enough to eat. To determine how to reverse that, NOAA scientists have tried to measure the relative importance of different West Coast chinook salmon runs so they know where best to concentrate their efforts. In the ranking, scientists looked at three factors: if a particular stock appears in the diet of the whales; if it appears in the diet of the whales during the stressful winter months; and to what degree the stock overlaps in time and space with the whales throughout the course of the year.

Based on this system, fall chinook from the Columbia Basin, including Snake River fall chinook, ranked relatively high — No. 3 on the list. This is largely because fall chinook are available to the whales for much of the year. Southern resident killer whales would be feeding on fall chinook during their broad forays off the West Coast roughly from late fall to about May.

Conversely, spring chinook are less available to orcas for much of the time the whales are off what scientists call the “outer coast.” However, as spring chinook return to spawn in fresh water, the fish congregate or stage near the mouth of the Columbia. It’s a short window for the whales, but some believe because of the density of fish at the time, it’s an important food source.

“The behavior of fall stocks tend to be more coastal in ocean distribution. They are more accessible to the whales for a longer period of time, not just during the spawning migration,” said Mike Ford, director of the conservation biology division at NOAA’s Northwest Fisheries Science Center in Seattle.

“Whereas spring run stocks, especially interior (runs) from the Snake and upper Columbia, their ocean distribution doesn’t really overlap with the whales at all, except for that couple-of-months period when they are returning to spawn,” Ford said. “During that period, they could be quite important to whales.”

When scientists overlaid data on the strength of chinook runs and the health of the whales, they found that during years with good chinook runs, the whales had higher birth rates. In fact, from 2013 to 2015, “there was a baby boom,” Ford said.

Ole Shelton, research ecologist at NOAA’s Northwest Fisheries Science Center in Seattle, said there is more scientists don’t know then they do about how specific stocks of chinook and southern resident killer whales interact. He calls it a “very active area of research.”

But Shelton said scientists know much more about fall chinook runs when it comes to their ocean distribution than they know about spring runs.

“I can entirely believe if Snake River spring chinook, if there were a lot more of them, that it would be healthy for the (killer whale) population. I can also see a scenario where it’s not true. It’s best to do as much as you can for as many stocks as you can and be successful about it,” he said.

For Sam Wasser, a research professor of conservation biology, ecology and physiology at the University of Washington, there is no doubt that Snake River chinook are important and even critical to the whales. Wasser studied blood hormones found in whale feces that among other things indicate pregnancy rates and levels of stress. His team used a novel approach to collect whale feces. They followed behind the whales in boats and used specially trained dogs to sniff out and locate whale feces so they could be scooped from the ocean surface with swimming pool cleaning nets, before they sunk or dissipated.

He found that 69 percent of all detectable pregnancies among the southern resident killer whale population failed, and more than 30 percent failed late in the term or upon or shortly after birth when the risk to the mother is much higher. Stress from a lack of food was likely the reason for the failures, Wasser said.

He and others measured two hormones in the whales that indicate stress. They found that when whales return to the Salish Sea in the spring after feeding off the mouth of the Columbia River, the whales showed low stress. But that changed quickly, likely because Fraser River chinook are scarce in the Salish Sea until mid to late August.

He said winter when the whales are hunting off the coast of the U.S. and Canada is a stressful time for them.

“That is a very rough time for them. It’s cold, they have to thermal regulate, they don’t have big adult salmon going up the mouth of a river, they have all sizes of fish that are harder to catch.”

Following winter, the whales find a fleeting bounty of food in the mid to late spring when they target spring chinook bound for the Snake and Columbia rivers. The stocks of spring chinook that push the farthest upriver are generally the first to show up. They also tend to have higher fat content to sustain them as they push upriver. Snake River chinook dominate the early returning spring chinook from the Columbia Basin.

“The early returning Columbia River chinook are some of the fattiest salmon known,” Wasser said. “That run was massive. It was something our work suggested was very, very important to replenish (the whales) from a harsh winter and also maintain them until the Fraser River chinook run peaks, which is not until the middle of August.

Because the chinook bound for places like the Clearwater and Salmon rivers have so far to go, they have evolved to be larger and fatter than other spring chinook.

“They have to go about 900 miles in migration. They have to come in fat laden and early,” Wasser said. “It seems very, very crucial to these whales. It seems like if there is one run that is really critical, that they could do something dramatic (for), it’s the Columbia River chinook.”

That is why many people look to dam breaching as something that can help the whales. Many whale advocates view it as a potential quick fix. Wasser isn’t among them.

“I’m not saying they should just breach the dams right away,” he said. “I think this is something that really deserves serious study, and up to now, every time you bring that issue up they say we can’t go there. I think it needs to be investigated in a very serious way to see if there is a long-term solution. I stress long-term. There are lots of things we can do in the interim.”