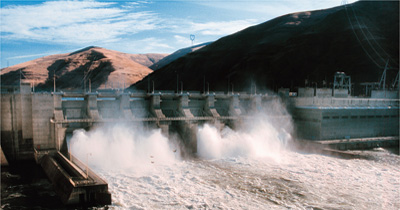 The federal government formally adopted its salmon and dams management strategy Tuesday that relies on spilling water at Snake and Columbia river dams to speed juvenile fish to the ocean but keeps the four lower Snake River dams in place.

The Army Corps of Engineers, Bonneville Power Administration and the U.S. Bureau of Reclamation issued a Record of Decision committing the agencies to a plan centered on balancing the needs of Endangered Species Act-protected salmon and steelhead with carbon-free hydropower production and efficient barge transportation on the Columbia and lower Snake rivers.

The plan, four years in the making, centers largely on spilling high volumes of water at the dams for about 16 hours a day in the spring and early summer while prioritizing hydropower production during hours of high prices and demand. It was chosen over several others, including one that would have breached Ice Harbor, Lower Monumental, Little Goose and Lower Granite dams — a strategy long favored by fish advocates, including the Nez Perce Tribe and environmental and fishing groups.

Federal officials framed the decision as one that balances competing interests on the rivers and the various communities and industries they serve.

“This selected alternative provides the best balanced and flexible approach to meeting the needs of the human and natural environment in the basin, both now and into the future. Our decision benefits the public interest, treaty resources and iconic fish species of the Pacific Northwest,” said Brig. Gen. D. Peter Helmlinger, commander of the Corps’ Northwestern Division at Portland.

Dam advocates said the decision to retain the dams and the transportation system on the lower Snake River sets the region up to better deal with climate change.

“The clean power and efficient commerce provided by the system’s hydroelectric dams and navigation locks are key to our region’s ability to reduce our carbon footprint — one of the most important steps in the fight against climate change,” said Kristin Meira, executive director of the Pacific Northwest Waterways Association. “We are pleased to see that the Record of Decision supports a more sustainable future while keeping the river system strong and balanced for all needs.”

But salmon advocates rejected the decision as insufficient to meet the challenge of restoring salmon and steelhead. They noted it simply avoids putting the fish at further risk of extinction. According to an Environmental Impact Statement that preceded the record of decision, the spill-centered plan may allow some of the listed runs to achieve the 2 percent smolt-to-adult survival rates that is required to stop their decline. It would not, however, achieve the average of about 4 percent needed to build wild fish numbers.

“We view restoring the lower Snake River as urgent and overdue. To us, the lower Snake River is a living being, and, as stewards, we are compelled to speak the truth on behalf of this life force and the impacts these concrete barriers on the lower Snake have on salmon, steelhead, and lamprey, on a diverse ecosystem, on our Treaty-reserved way of life, and on our people,” he said in a written release.

Conservation leaders also panned the plan and said bolder action is required. “The region has made it really clear that we want salmon and steelhead restored to ecologically and economically significant and harvestable levels so the people and wildlife have salmon again, and this plan doesn’t do that,” said Justin Hayes, executive director of the Idaho Conservation League. “This plan sets a really low bar. Limping along under the ESA is different than restoring salmon so the people of the Northwest can be made whole again.

If past is prelude, lawsuits will soon follow. The government’s past efforts to operate the dams while also avoiding harm to threatened and endangered fish have repeatedly been struck down by federal judges.

But instead of pledging an immediate return to court, many conservation leaders called for a new way forward.

“The differences between the plan adopted by these agencies today and the plan the court rejected in 2016 are hard to discern. And the plan the court rejected in 2016 was not materially different from plans the court had rejected in 2003, 2005, 2009 and 2011,” said Todd True, the lead attorney for Earthjustice, an environmental lawfirm that has represented fishing and conservation groups. “To say we need a new approach, that we need leadership from our elected representatives, and that we need to find a solution that works for all of us is to state the obvious. And it is equally obvious that there is great urgency to do this — for salmon, for orcas and for the future of our region.”

“It does feel like there is energy to finally solve this problem but again I think if we are waiting for the federal government to solve it for us, we just saw in the Record of Decision that we are waiting for the wrong thing,” Hayes said.
Wheeler said the tribe is seeking to lead and participate in a variety of efforts to save the fish, including its previously successful litigation.

“We are committed to continuing to provide leadership on restoring the lower Snake River in all forums: from the halls of Congress, to our federal agency trustees and partners, to the courtroom, to the statehouses, to conversations with our neighbors, energy interests, and other river users,” concluded Wheeler.