KOMO News: A million salmon could be restored by removing Snake River dams 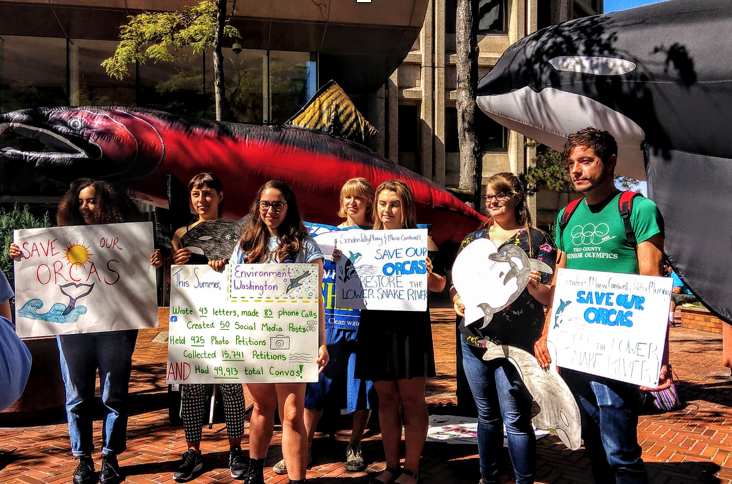 With both salmon and Southern Resident orcas in dire need of help, local students and experts are filing a petition to save these species by taking down dams along the Lower Snake River.

Salmon are incredibly resilient creatures. They travel from the Pacific all the way to central Idaho every year to spawn. However, navigating over four dams in Eastern Washington has made that migration exceedingly difficult.

Our beloved Southern Resident orcas rely almost exclusively on Chinook salmon to survive. But with a dwindling salmon population, our regional orcas are starving.

"And we can’t wait! This population has been declining steadily for decades," said Robb Krehbiel, the northwest representative for Defenders of Wildlife.

That's exactly why students from across the state partnered with Environment Washington this summer, gathering about 17,000 signatures statewide for a petition to Congress. They're asking the government to take down four dams along the Lower Snake River in Eastern Washington.

According to experts like Krehbiel, taking down these huge dams would restore over a million adult Chinook salmon every year for orcas.

"If we don’t invest in real solutions, then we may lose these orcas in our lifetime," emphasized Krehbiel.

The petition comes on the heels of new research released by ECONorthwest. The results of that study suggested that the ecological and economic benefits of removing the four dams far outweigh any losses to agricultural or commercial industries.

"Through investments in solar, in wind and in energy efficiency, we can easily replace the services that the energy produced by these dams without switching over to fossil fuels or natural gas," added Krehbiel.

Krehbiel also suggested that the Army Corps of Engineers remove the earthen portions of the dam to get increased flows and restore habitat for salmon, adding that this could be a fast and effective solution.

I asked the Northwestern Division of the Army Corps of Engineers what they thought about this petition. They released this statement in response:

"We share the region's concern for fish and orcas. We want to inform the region and participate in discussions that support balancing our multiple missions (that include flood risk reduction and support to navigation) within a complex ecosystem.

Dam breaching is not a silver bullet nor does the Corps have the authority from Congress to implement an action such as dam breaching. Until such a time, the Corps must continue to operate and maintain these dams for their authorized purposes.

We are now evaluating alternatives that best balance the multiple purposes of the system of 14 federal Columbia River projects. This NEPA process includes evaluation of the effects of alternative system operations on fish and wildlife that may be affected by system operations.

One alternative includes breaching the four lower Snake River dams. A draft EIS is scheduled to be released in February 2020 for public review and comment, a final EIS in July 2020 and Records of Decision by September 2020."

Talking about removing dams along the Lower Snake River is controversial, and KOMO News will be tracking the latest developments carefully.