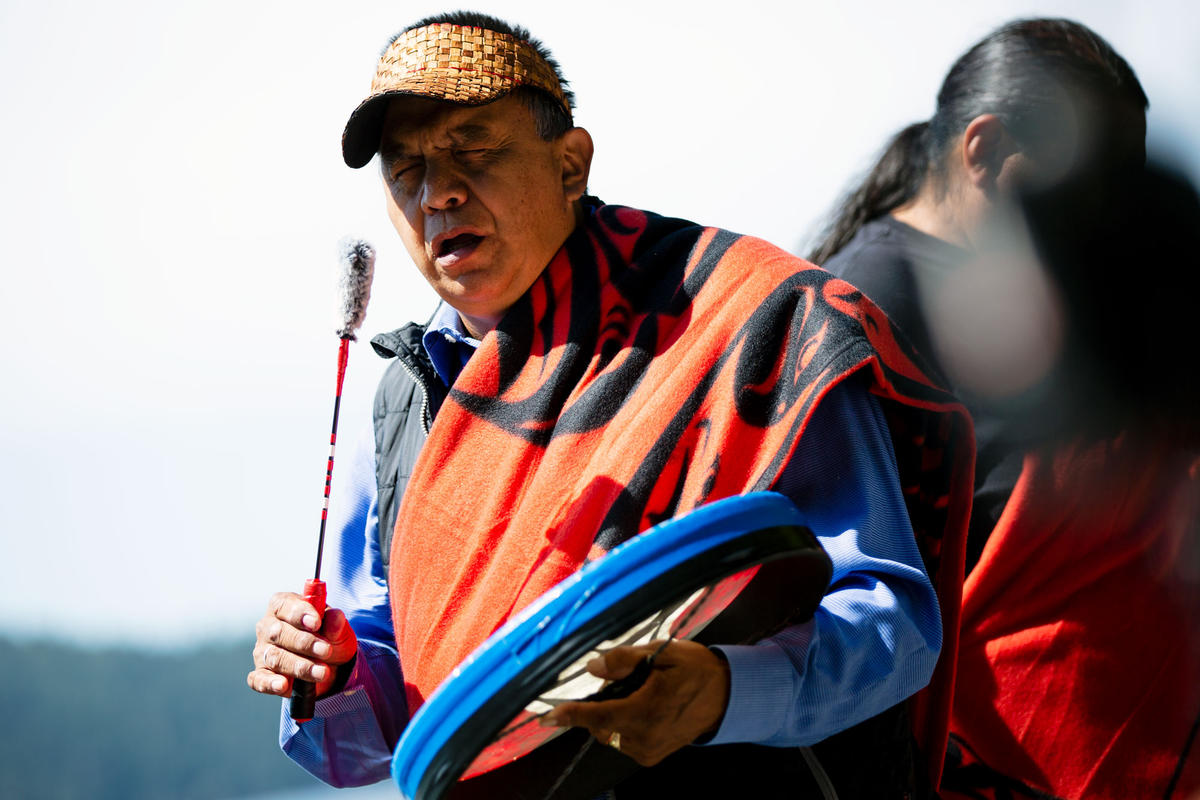 Earlier this summer, the Lummi Nation came to Seattle and launched a campaign to protect and revitalize the Salish Sea. The tribe is based near Bellingham, at the heart of that body of water, which extends from Puget Sound to Desolation Sound in Canada and out past Vancouver Island into the Pacific Ocean.

The Salish Sea also is home to the region’s endangered Southern Resident killer whales, whom the Lummi view as family. A formal ceremony to honor the spirits of the three orcas, who scientists recently identified as missing and presumed dead, was the latest step in the Salish Sea campaign. Lummi leaders also held a naming ceremony for the remaining 73.

Representatives from the Swinomish and Suquamish tribes, as well as the Tsleil-Waututh Nation from Canada joined the Lummi on the water near Orcas Island.  Guests representing environmental groups, government agencies and media looked on.

“We did a memorial ceremony to the three Qwe ‘lhol mechen that have passed,” said Raynell Morris, director of the Lummi Nation’s Sovereignty and Treaty Protection Office, who sent out formal invitations to the guests.

Qwe ‘lhol mechen is the Lummi word for orcas. It also means roughly, "our relations under the sea." Morris said it was important for her people to conduct ceremonies to honor them.

“To thank them, to wish them well on their journey, to let their families know, we hear them. We’re praying for them. They’re hurting — their family’s missing them.”

From the deck of a Lummi Nation police vessel, the tribal members sang and drummed, as wildlife officials handed out 12 live hatchery Chinook, provided by the state Department of Fish and Wildlife. The tribe and the state agreed that no federal permit was needed for this, as conducting this kind of ceremony is considered an inherent right.

One by one, tribal members first held the large salmon — not an easy task as the muscular fish flopped and squirmed — and then tossed them into the water, as an offering of food for the remaining orca population.

“We know that that’s not enough to feed them all. But it’s a message to them that we know they’re hungry, they know we’re hungry,” Morris said.  “We offered the 12. There’s more to come. There’s hope.”

Many others shared the bittersweet sentiment and they held and offered the salmon, including Reuben George from the Tsleil-Waututh First Nation, who drummed during the ceremony and sang a song of passage for the dead.

“It’s like a caterpillar to a butterfly. There’s a metamorphosis that happens, that’s what we believe in,” George said.

“We have a continuing spiritual connection, that’s what that ceremony’s about, is honoring that spiritual relationship between the orcas and us as human beings. And to honor that connection that we have, we try to send them off in a good way, to the spiritual realm.”

Wearing a "Coast Salish Pride" T-shirt, he came from Vancouver, B.C., to take part in this ceremony. He says the Tsleil-Waututh also view the orcas as family. They are mourning too. He says members of the Coast Salish Nation that he and other local tribes are part of do not recognize the U.S.-Canadian border between them.

“And the same with orcas. They don’t have to bring in their passport and check in the office when they need to come up to Canada and catch some nice Fraser river salmon,” he said.

Reuben George is with his nation’s Sacred Trust initiative that has been fighting against the expansion of Canada’s Trans Mountain Pipeline. The Lummi and its Salish Sea campaign are important allies.

A NEW FORM OF COMMUNICATION

Along with the song above the water, the Lummi for the first time also offered their voices in a higher frequency — transposed by a scientist, so that the whales could understand.  They used an underwater beacon called a pinger to project the sound from the police boat into the sea beneath them.

From an adjacent vessel, marine mammal researcher Katie Foster held a speaker attached to a hydrophone, so the guests assembled to watch could hear it, too.

“It sounded like it was slightly sped up to a lot of the folks who were listening in on the boat. And that was because it was in that higher frequency range that would be more in tune with what the whales use to communicate with one another,” Foster said.

She says researchers will comb the underwater recording for any evidence of response from the local orcas, who the local whale watch network said were in the area at the time, although no one on the Lummi boats saw them.

After the offering ceremony wrapped up came another first. The group moved on land, to the beach at the Glenwood Springs Chinook Hatchery — said to be the site of a 5,000-year-old Lummi village.

Four formal witnesses were wrapped in blankets as the tribe formally gave the local orca population a family name. To start the ceremony, Morris placed several cedar boughs into the waves. She said this was an offering of earth to water, a combining of two elements that would give birth to a spirit, or prayer.

“When you combine two, it creates a spirit,” she said. “So that’s what that work was doing — offering to the water: healing. The Salish Sea: healing.”

Lawrence Solomon, secretary of the Lummi Nation’s Business Council, then announced what he said was a very special moment for the tribe’s relatives: in receiving this new name, the would get a new identity.

He repeated the new name several times, inviting those assembled to pronounce it with him. The name links the entire population to a village site near Penn Cove, where dozens of Southern Residents were captured from the mid-1960s to early 1970s.

After practicing the new name, each formal witness was invited to speak.  Suquamish Chairman Leonard Forsman — who also is president of the Affiliated Tribes of Northwest Indians — talked about how important the Southern Resident killer whales have been to local native cultures, appearing in creation stories that have been handed down for generations.

“And the one thing about them is they’re like us. They depend on these waters for their survival, for their well-being, for their food, their recreation, for their spirituality as well,” he told everyone assembled.

Forsman has been serving on the governor’s Southern Resident Killer Whale Task Force, a group of experts who concluded last year that the orcas need more salmon, more clean water, less noise from vessel traffic and the prevention of oil spills. He could hardly believe what he heard.

“I thought I was in one of the meetings from our tribe and the government to government relationships that we have with the state and federal government — that they are asking for the same things we have been asking for, for decades,” he said.

The Lummi tribe has been engaged in a long fight to free the captive orca, Lolita, and bring her home from the Miami Seaquarium. She was caught at Penn Cove nearly 50 years ago and is the only Southern Resident killer whale from that era who has survived and remains in captivity.

She also is called Tokitae by some, but the tribe recently gave her the new family name, Sk’aliCh’elh — connecting her identity to that village near Penn Cove, where she was captured.

Raynell Morris, with the Lummi, says they call her Sk’aliCh’elh-tenaut, with the last two syllables meaning roughly, ‘female from…”

“It links her to them, them to us, in an honor.” Morris said, adding that the honor also is a responsibility, based on a spiritual give and take that is part of their connection to the resident orcas.

“It’s a huge obligation. Because they’re asking for a reciprocal relationship. They’ll protect us, but we need to protect them.”

She says the idea for the naming ceremony came during a burning ritual earlier this year, in which they offered their ancestors plates of food. Morris says the spirits came in full force, hungry and grateful for the offering, and told the Lummi to do more.

“And part of their message was: continue the hard work to save the Salish Sea," she said.

Morris says another thing they wanted to do with this work was to be inclusive. So they invited non-tribal members and media to be informal witnesses, too.

“You’re part of this. This is family, this is an obligation. You have your part, we have ours,” she told KNKX. “It is your family too. Because you’re on this earth. You’re a human being,” she said.

“Everybody just needs to pay attention to what’s happening to the Salish Sea. You need to do your part. It’s now.”

That could mean writing to a local legislator to let them know how you feel. Or, Morris says, everyone is invited to the next big event in the Lummi Salish Sea campaign. It’s at the public fishing pier in Blaine on Sept. 27.