In early July, the Idaho Fish and Game transported 201 sockeye salmon from the Lower Granite Dam on the Snake River because rising water temperatures have made the journey home more difficult. 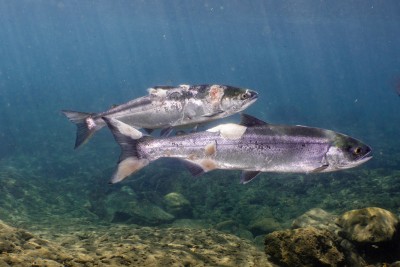 EAGLE, Idaho — In early July, the Idaho Fish and Game transported 201 sockeye salmon from the Lower Granite Dam on the Snake River because rising water temperatures have made the journey home more difficult.

This happened after the Army Corps of Engineers and NOAA Fisheries helped trap the fish then the Idaho Fish and Game brought the sockeye to the Eagle Fish Hatchery.

"Obviously in a normal year we would prefer that these fish complete that last leg of their journey and their full ocean-going life cycle," said John Powell of the Idaho Fish & Game. "But in a year like this, we had to give them that assistance and increase migratory survival because of those extreme conditions."

The Idaho Fish & Game started a broodstock program in 1991 after zero sockeyes returned the previous year, this effort helps ensure the survival of the sockeye in Idaho.

So far this year only two sockeyes have made it back to Red Fish Lake and 629 have made it to Lower Granite Dam, one of the four dams Representative Mike Simpson has proposed breaching in a $33.5 billion dollar plan he unveiled in the spring.

"Dams make it so the water is hotter which is really important on a year like this," said Rachel Brinkley of the Idaho Conservation League who we ran into during a flotilla to raise awareness for Simpson's plan. "There is more exposure to predators, it means that less juvenile salmon are going to the ocean and less adults are coming back."

No matter where you stand on the controversial dam issue, the Idaho Fish and Game work in another way to ensure the survival of sockeye salmon.

"When fish get here they go through a full biological workup, we look at their length, their weight, we determine their sex, we take a scale and sometimes we will use that scale to age the fish," said Powell. "We can determine how to conserve the genetic diversity."

Once the Idaho Fish & Game figure out which of the 201 sockeyes came from Red Fish Lake or from their hatchery program the next step is either to spawn them at the hatchery or release them back into the lake.

"The fish released into Red Fish Lake will spawn the next generation of fish that will go to the ocean," said Powell.

The heat and drought conditions aren't just affecting the salmon, all over Idaho reservoirs are dropping because of the drought.

Last week the Idaho Fish & Game issued a salvage order for the Lost Valley Reservoir west of McCall, until November anglers have the opportunity to catch as many trout and perch with no limits because as the water drops the fish will die anyway.