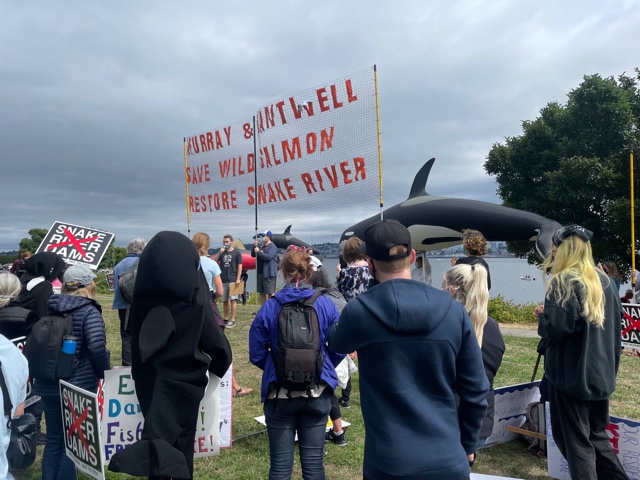 SEATTLE — Conservation groups are calling on lawmakers for the removal of all four lower Snake River Dams. The goal is to save salmon and in turn southern resident orcas.

After a blessing from the Duwamish Tribe, kayaks, canoes and paddle boards hit the Puget Sound to save the salmon and orca of the Pacific Northwest.

“Indigenous nations here in the Northwest have orca as part of their culture and their spirituality. So, if we lost these incredible animals, I don’t think we would be the same Northwest that we have been,” said Chris Connolly, with the Endangered Species Coalition.

The event was called “Rally for the River” and was put on by several organizations with one goal: the removal of the lower Snake River Dams to save salmon and orcas in the Pacific Northwest.

“These four dams in the lower Snake River were erected in the 70s and 80s, fish biologists knew then that these dams were going to really hurt salmon populations,” Connolly explained.

The four lower Snake River dams, all in eastern Washington, are hydroelectric Dams.

These groups want them removed to save salmon and replaced with other sources of renewable energy from things like electrifying railways.

Salmon use the Snake River to travel to the Sound every year. Without salmon there are no more orcas, the groups argue.

“The Southern Resident orcas, one of the most iconic species we have here in the northwest, pretty much only eats salmon. 80% of their diet is just Chinook Salmon. When the salmon die, the orca dies,” Connolly said.

On top of the harm dams cause, the recent heat wave also played a big role in recent salmon deaths.

“Climate change in really heating up their rivers which is effecting basically the way that they live so some of them are actually dying,” Connolly said.

“We are calling on Senators Cantwell, Murray and Governor Inslee to take strong action to save Orcas and salmon,” said Pam Clough with Environment Washington

“If we lost these two species that are on the brink of extinction, then what would be as a region?” Connolly said.

“Salmon, orca, and habitat recovery is an important priority for me and it’s an important part of our state and Tribes’ heritage and culture—it’s something I’ve recently brought up directly with DOT Secretary Pete Buttigieg and the OMB Director Shalanda Young. I understand the urgency of recovery efforts, and the need to take action quickly.

“I’m glad that I was also able to help secure significant funding for salmon and habitat recovery related efforts in the bipartisan infrastructure package we are working to pass right now: $1 billion for culvert removal, replacement, and restoration; $172 million for the Pacific Coastal Salmon Recovery Fund; and $207 million for the Coastal Zone Management Program, as well as other important habitat restoration investments. I’m also pushing for major investments through the reconciliation package and the annual appropriations process.

“I am working with Governor Inslee and leaders throughout the region to prepare next steps. I appreciate everyone who is engaged on this issue and making sure their voices are heard. It’s clear there is energy, commitment, and dedication to tackling this challenge.”