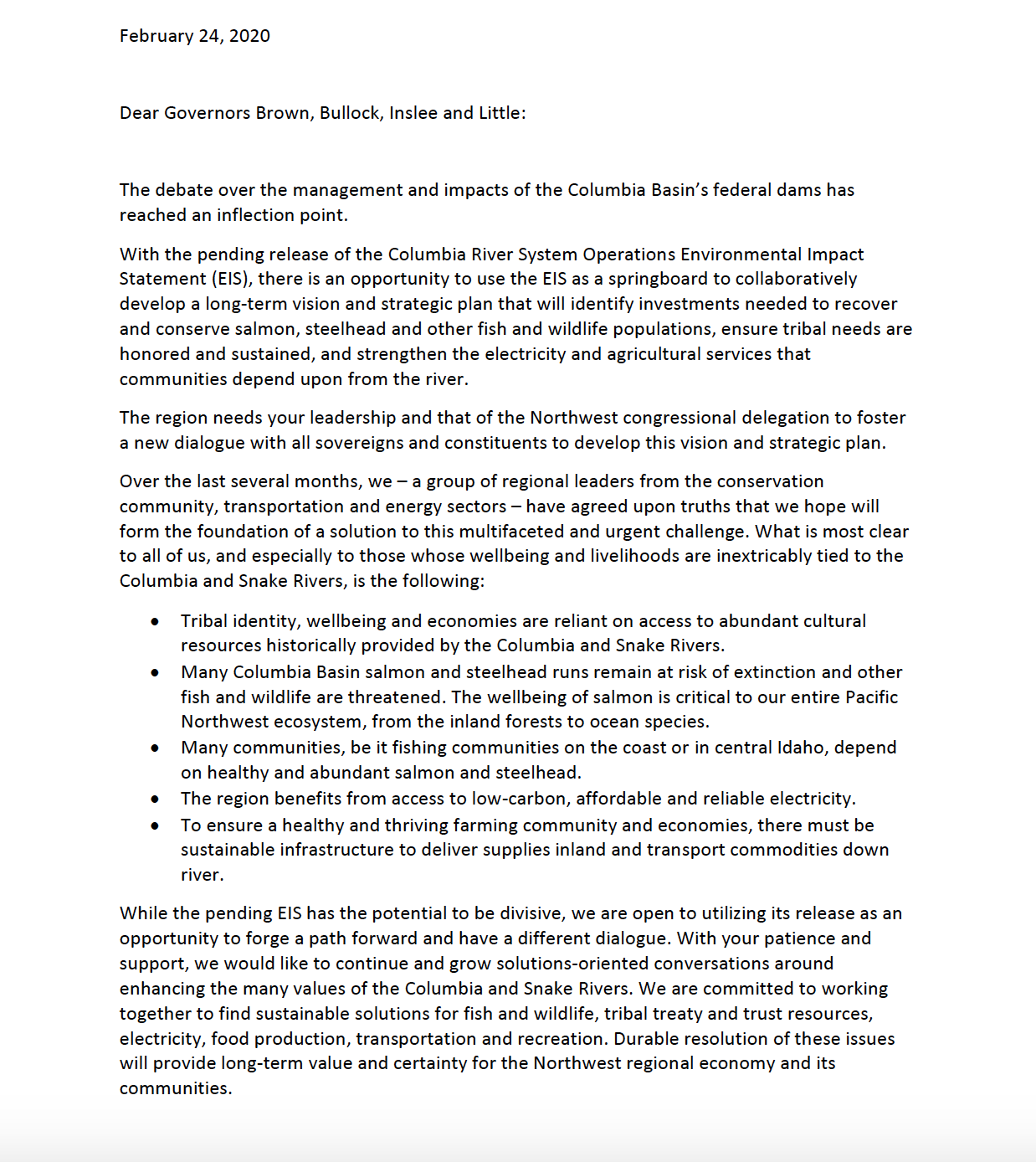 An unlikely group of environmentalists, river users and public utilities wrote a letter Monday to the four Pacific Northwest governors and Native American tribes asking them to convene collaborative talks to restore abundant stocks of salmon and steelhead.

Seventeen groups — ranging from Save our Wild Salmon, the Sierra Club, the Natural Resources Defense Council and Trout Unlimited to the Port of Lewiston, as well as public utilities including Idaho Falls Power and the Flathead Electrical Cooperative in Montana — called for a plan to recover salmon. They said it’s time to “honor and protect tribal needs and way of life, and strengthen the electricity and agricultural services that communities rely on.”

The letter comes only days before federal dam and power managers release a draft environmental plan for operating the region’s electric power system that includes 29 dams and one nuclear power plant.

The study was ordered by a federal judge after he ruled the federal agencies’ plan for protected endangered salmon and steelhead was inadequate to protect the fish, which are spiritual sustenance for the region’s tribes and critical to the economies of communities from the Pacific into central Idaho.

Many of the signors have long been locked in a battle over whether to remove the four dams on the lower Snake River in Washington. Save our Wild Salmon, the Sierra Club and Trout Unlimited all advocate for dam removal while the Port of Lewiston is among the strongest voices for keeping the dams that provide its wheat farmers a barging route to the Pacific.

“If we respect our differences and direct our energy toward identifying the strategic investments needed to meet our shared vision and goals for the Pacific Northwest, we can build a comprehensive regional plan and investment package that will be supported by the region’s sovereign leaders, including the Northwest congressional delegation,” they wrote.

“Signatories of this letter represent a broad alliance of river interests committed to restoring abundant salmon and steelhead runs,” said David Doeringsfeld, general manager of the Port of Lewiston in a statement released with the letter. “We are hopeful that diverse interests throughout the PNW will unite around meaningful recovery efforts.”

“It is time to bring people and communities together to forge a solution that restores abundant salmon and steelhead and a healthy river, sustain strong communities and local economies, and assure our region continues to benefit from reliable clean energy,” Arthur said.

The letter comes only two weeks after Oregon Democratic Gov. Kate Brown expressed support for a similar process but said it must include “a presumption” that dam removal is included in the plan.

The letter, which sources said had been in the works for months, made no reference to dam removal.

Instead it laid out shared goals for the region’s salmon and energy challenges. Those shared goals include abundant and harvestable salmon; an enhanced economy for farming, transportation, fishing, recreation and ports, and preserving treaty rights and tribal culture.

Washington Democratic Gov. Jay Inslee has been asking residents to comment on a study of dam removal he requested in light of the endangered status of orca, which depend on Columbia and Snake River salmon. Idaho Republican Gov. Brad Little also has convened many of the groups in the letter and others, including the Nez Perce and Shoshone-Bannock tribes, in a collaborative process to guide his own salmon and steelhead policy. Democrat Steve Bullock is the governor of Montana.