Idaho Statesman: The first sockeye arrives at Redfish, but biologists worry few will follow. Here’s why 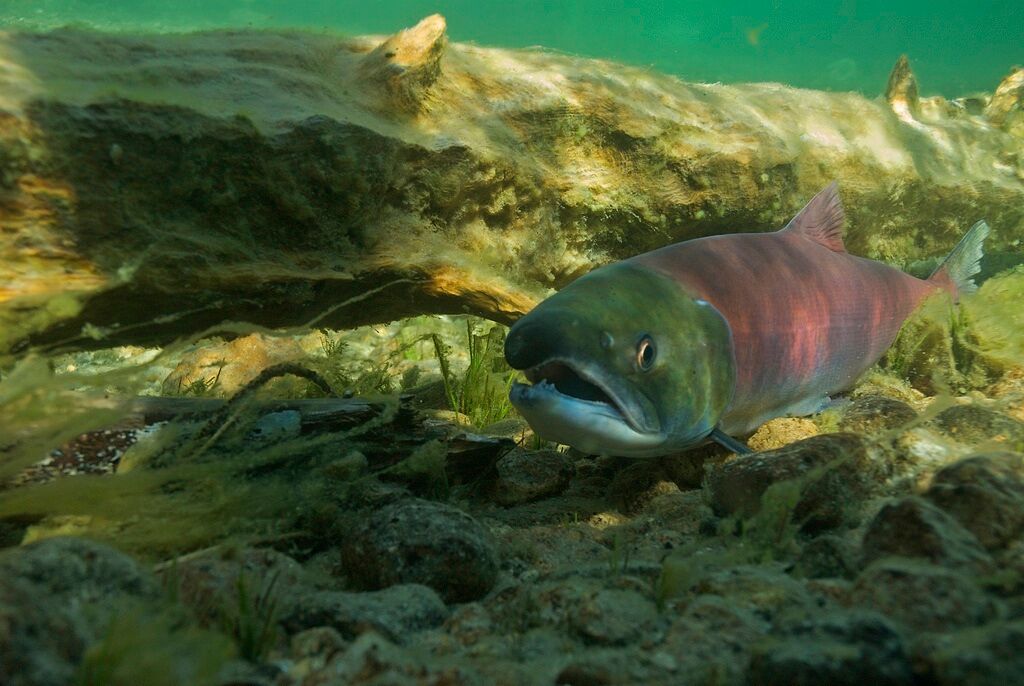 More than a hundred sockeye salmon were delivered from Stanley to the Eagle Fish Hatchery in late September. These sockeye have migrated from the Pacific Ocean to Redfish Lake, climbing more than 6,000 feet in elevation.

The first Snake River sockeye to complete the trip to Redfish Lake Creek in the Sawtooth Valley, some 800 miles from the Pacific Ocean, arrived Friday.

The red-bodied salmon that give Redfish Lake its name are struggling to make the final climb to spawn in the cold waters. But caught in a trap just above the lake, the female sockeye, who arrived in good condition, was trucked to the Eagle Hatchery, where biologists determine its genetics as a part of Idaho’s captive breeding program.

So far only 50 sockeye have been seen at Lower Granite Dam on the Snake River in Washington, the final of eight dams between the Pacific and Idaho. Dismal returns have been recorded this year for all salmon and steelhead, but the sockeye, which have rebounded remarkably over the past 27 years, are having a particularly rough time.

About 1,000 sockeye usually would have passed over Lower Granite by now, using average numbers from the past decade. And more than 300 were already seen at Ice Harbor Dam during this migration. Where they went, no one knows.

The Effects of Climate Change

Unless more show up soon, Idaho can expect about only half of the sockeye seen at Lower Granite to arrive at Redfish Lake Creek, an event celebrated with joy throughout Idaho. But a new report by NOAA Fisheries biologists says the Snake River sockeye is one of the most vulnerable salmon on the Pacific Coast when it comes to climate change.

The low productivity of all salmon and steelhead this year is the continuation of warm Pacific Ocean conditions from 2014 to 2017 — conditions that have not been seen in longtime historical data. In 2015, the Columbia, Snake and Salmon rivers were so hot in the early summer that of the 4,000 sockeye seen at the first dam on the Columbia, all but 157 died during the migration.

Low flows that year also hindered the migration of the juvenile sockeye that left the Sawtooth Valley for the Pacific. And all of the young salmon raised in the new Springfield Hatchery died due to stress caused by the hatchery’s water chemistry.

The Snake River sockeye have become emblematic of the multibillion-dollar effort to recover threatened and endangered salmon in the entire Columbia River basin since Lonesome Larry, one of five male sockeye to return to Redfish Lake Creek in 1991. He, along with the last 15 other sockeye that returned the year before, and those that returned in the next two years, held the valuable genetic code of the southernmost sockeye population, which climbs to 6,500 feet above sea level.

Fish and Game began its captive breeding program designed to preserve that genetic material, which has since been considered one of the great salmon conservation success stories. Officials saw an average of more than 1,000 fish returning annually until the 2015 setback.

Climate scientists predict that temperatures will continue to warm across the region. By 2070, conditions like those seen starting in 2015 are predicted to be more frequent and even worse. But this year, temperatures in the Columbia and Snake rivers have not been significantly warmer than usual, said Russ Kiefer, a Fish and Game research biologist.

“This is not a year when temperature is impacting Snake River sockeye,” he said.

So why have only 17% of the sockeye who made the trip to Ice Harbor Dam been seen at Lower Granite?

Kline and his staff of biologists guess that many of the sockeye at Ice Harbor were from the much larger Upper Columbia sockeye populations, which followed the cooler waters into the Snake River. Last year, the staff sampled sockeye in the Lower Granite ladder — where the salmon climb over the dam — and 20% were Upper Columbia sockeye. Counters also might have mixed up the sockeye with other fish.

“It doesn’t take much to make the counts out of balance,” Kline said.

As vulnerable as the Idaho sockeye are to climate change, they are not alone. The Chinook in California’s Central Valley are equally at risk, said NOAA research biologist Lisa Crozier. Those fish have less genetic diversity due to their mixing over decades with hatchery stocks, and have some of the higher-elevation spawning streams blocked off by dams.

Others of the 33 population groups studied at high risk are coho in northern California and Oregon, and spring Chinook in the lower Columbia and Willamette river watersheds.

All 33 salmon population groups were found to be vulnerable to lower stream elevations and sea surface temperatures, along with ocean acidification.

“Salmon have always adapted to change, and they have been very successful — otherwise they wouldn’t still be here,” said Crozier, lead author of the report. “What we are trying to understand is which populations may need the most help with anticipated future changes in temperature and water availability, and what steps we can take to support them.”

The report says Snake River spring-summer and fall Chinook salmon are among the fish with the highest “adaptive capacity” to survive the coming climatic conditions. The Chinook migrate earlier and later than the sockeye, so they avoid the hottest water during migration, Crozier said.

Many of those populations have little if any hatchery influences genetically, which enhances their ability to adapt. They also have a diversity of behaviors, such as where and how long they rear in freshwater. For instance, Snake River fall Chinook, cutoff from much of its spawning habitat by Idaho Power’s Hells Canyon complex of dams, stay in the cooler Clearwater River longer before migrating to the Pacific.

Still, this year, spring Chinook numbers are also low, and fewer than 700 wild steelhead are expected to return to Idaho. If nothing else is done, these fish could go extinct.

“Idaho sockeye are the canary in the coal mine for all of Idaho’s salmon and steelhead runs,” said Justin Hayes, Idaho Conservation League executive director. “We’re spending tens of millions of dollars to keep sockeye from going extinct. “

The climate report says habitat restoration projects — including removing dams that prevent adequate fish passage — could provide some species with more of a buffer against changing temperatures and flows. This comes as federal agencies are studying whether to remove four dams on the lower Snake River in Washington to increase salmon runs.

The federally funded Fish Passage Center predicts that this will increase salmon and steelhead numbers as much as fourfold.

“The fish will change; we have to be prepared for that,” Crozier said. “Given a chance to persevere, they will take advantage of it.”