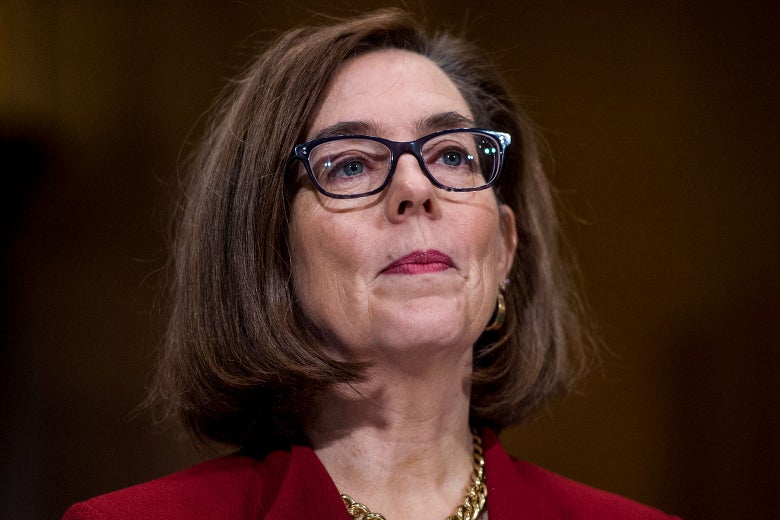 Oregon Democratic Gov. Kate Brown said removing four dams on the lower Snake River in Washington must be a part of a comprehensive plan to save endangered salmon, steelhead and orcas and to protect the region’s cheap clean energy and agricultural economy.

“No other action has the potential to improve overall survival two-to three-fold and simultaneously address both the orca and salmon recovery dilemma,” Brown said in a letter obtained by the Idaho Statesman addressed to Washington Gov. Jay Inslee.

“Gov. Brown’s position is not only misguided, it is shocking and extreme,” said Reps. Dan Newhouse, Cathy McMorris Rodgers and Jaime Herrera Beutler, in a joint statement Friday afternoon.

Brown’s letter came as Inslee has held a series of meetings across Washington to discuss the threat of extinction for orca, as well as the Snake River salmon and steelhead that make up a critical part of their diet. He is gathering views about removing the four dams as a way to help the fish and orcas. A final report from that effort is expected in early March.

Restoring the Snake River must be a “key presumption” of solution-based collaborative discussions that ensure the region has “an affordable, nimble and reliable power system that can help us to integrate renewables to meet our climate goals; continued water supplies for agriculture and municipalities; and efficient and affordable ways to get commodities to market,” Brown wrote.

Brown said removing the earthen portions of the four dams must be a part of the solution because it would reduce direct and delayed mortality of wild and hatchery salmon associated with dam and reservoir passage, reduce water temperatures in the lower Snake and Columbia rivers, and aid migration to and from the alpine headwaters in Idaho and Oregon most resilient to shrinking snowpacks.

Oregon, the Nez Perce tribe and the Bonneville Power Administration had spearheaded an agreement between all four Northwest states and the Native American tribes. That agreement provides additional spilling of water over the dams away from hydroelectric turbines to aid salmon migration except when the power can bring the most revenue. This “flex-spill” agreement began a collaborative process that Brown urged Inslee to continue.

“Hopefully we can work together to improve on that agreement, which will enhance survival of juvenile wild and hatchery salmon which translate into additional orca forage only two years later,” Brown wrote. “Second, Oregon has capacity to increase interim hatchery production of salmon important for orca forage.”

Federal dam managers are expected to release a draft environmental study of the region’s power system at the end of this month, as ordered by a federal judge. The Republican Washington Congressmen told the Tri-City Herald in their joint statement Brown should have waited for the federal government study’s release.

“This is yet another example of state officials trying to interfere in the operation of critical federal infrastructure,” they wrote.

Idahoans are divided on dam removal

Earlier this month, the Boise State University School of Public Service released its 2020 Idaho Public Policy Survey that showed Idahoans are divided on the issue. About 40% of people surveyed said they were in favor of dam removal on the lower Snake River to aid salmon recovery. About 38% of people were opposed. Another 22% answered they were not sure, suggesting a large group of Idahoans want to know more before they decide.

Lost hydroelectric power was the most commonly cited reason for opposing dam removal.

Idaho Gov. Brad Little convened a Salmon Workgroup at a conference held last April sponsored by the Andrus Center for Public Policy. Since then, the workgroup, which includes salmon advocates, farmers, tribal representatives, shipping interests and electric utilities, has met around the state. Little has avoided talking about dam removal.

“Governor Little remains committed to finding creative solutions that help bolster our anadromous fish populations in Idaho,” said Little’s Press Secretary Marissa Morrison Hyer. “He directed this diverse group of stakeholders to come up with pragmatic, consensus-based solutions that promote healthy salmon populations and thriving river communities in Idaho, and not to fixate on a single divisive issue that will only serve to stall the workgroup’s progress.”

At the same Andrus Center conference, Idaho Republican Rep. Mike Simpson advocated that the Pacific Northwest do everything it can to restore healthy, sustainable wild salmon populations to Idaho.

The Republican U.S. congressman stopped short of calling for the removal of the four lower Snake River dams. But Simpson asked all interested parties to consider “what if?” What if those dams, which provide grain shipping from the Palouse in Idaho and Washington, as well as electricity and backup for wind and solar power in the region, come down?

That triggered much of the new debate over the issue as salmon and steelhead numbers have plummeted despite more than $17 billion in spending by federal dam managers over the last 25 years.

The reaction of Washington’s Republican delegation portraying dam removal as extreme keeps people from asking the “what if” questions and stifles solution-based discussions, said Justin Hayes, executive director of the Idaho Conservation League and a member of Little’s working group.

“People are trying to protect their interest alone and not trying to find a solution for everyone,” Hayes said.

Hayes believes, as Brown said in her letter, that dam breaching must be a part of the solution. However, he said it will take many actions and ideas, including options Little’s working group is examining, to make a difference. Some of those options must include having a plan to deal with predators, harvest and other measures. Ensuring the power, agriculture and transportation issues surrounding the dams must also be addressed, he said.

“The river provides transportation for grain and that’s really important to those people,” Hayes said. “And we’ve got to find alternatives that work for farmers.”

Kurt Miller is the executive director of Northwest RiverPartners, a group that represents public-owned utilities and transportation interests across the region. His members believe breaching the four dams and replacing their power will cost billions of dollars.

“We are looking to form partnerships with people we have not typically agreed with — environmentalists, Indian tribes — but the important caveat is we have to agree to disagree about dams,” Miller said.

Overcoming this gap — and the fear that once groups agree to discuss breaching they won’t be able to go back — are the challenge the governors in Oregon, Washington, Idaho and to a lesser degree Montana, which is tied to the public power grid, must overcome to find a solution.

With his own caveat, Little is optimistic, Morrison Hyer said in her email response.

“He is confident the Salmon Workgroup members are up to the task,” she said.