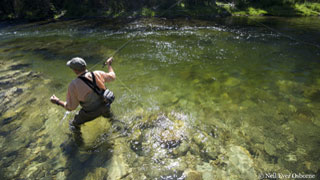 Business leaders from some of Idaho’s smallest towns located along some of its best salmon and steelhead rivers are telling the federal government that angling is vital to their economies and steps must be taken to preserve the hard-fighting fish.
Chambers of commerce from Riggins, Salmon, Kamiah and Stanley sent comments to the Army Corps of Engineers and its sister agencies, panning the nearly 8,000-page Columbia River System Operation Draft Environmental Impact Statement. They said the federal officials ignored the sport fishing economy that is vital to their towns and endorsed a salmon recovery strategy that doesn’t recover the fish.

“It was just left off the radar; we felt pretty offended,” said Roy Akins of the lack of economic analysis on sport fishing. “We realize it’s been dubbed an invisible economy, but to have it thrown in our faces like that was pretty harsh.”

Akins is a fishing outfitter, has a seat on the Riggins City Council and is a member of the Salmon River Chamber of Commerce.

In their comments, the chambers noted there are lots of economic studies the agencies could have tapped.

“It is unacceptable that the draft EIS did not include publicly-available data sources to quantify both the economic potential of abundant fish returns, as well as the devastating financial impacts of declining salmon and steelhead populations on rural communities in Idaho and throughout the Pacific Northwest,” they wrote.

Dawnmarie Johnson, vice president of the Kamiah Chamber of Commerce, said fishing is one of the few economic engines along the Clearwater River.

“Fishing and hunting brings a lot of money into our area, and timber and the timber market is nothing right now,” she said. “It’s amazing how many fishermen we have in this area that come in and frequent our restaurants, and grocery stores and gas stations.”

The public comment period on the draft EIS comes to an end Monday. The study looked at a range of alternatives to balance the needs of threatened and endangered salmon and steelhead with operation of the federal hydropower system on the Snake and Columbia rivers.

It examined, but dismissed, breaching the four lower Snake River dams. The agencies found restoring the lower Snake to a free-flowing river would give the fish the best chances of recovering. But they said breaching — which would end barge transportation on the river and reduce generation of hydropower — would be too costly. Instead, the agencies chose to continue a strategy centered on spilling water at the dams to help get juvenile fish safely downstream.

In their comments, the chambers noted that the strategy backed by the federal government falls well short of recovering the fish.

“The plan they like has virtually no benefit to our fisheries in Idaho and maintains us on a course to eventual extinction,” Akins said.

The comments from the small towns are in contrast to those made by the Lewis Clark Valley Chamber of Commerce of Lewiston and Clarkston, which backed the federal government’s approach.