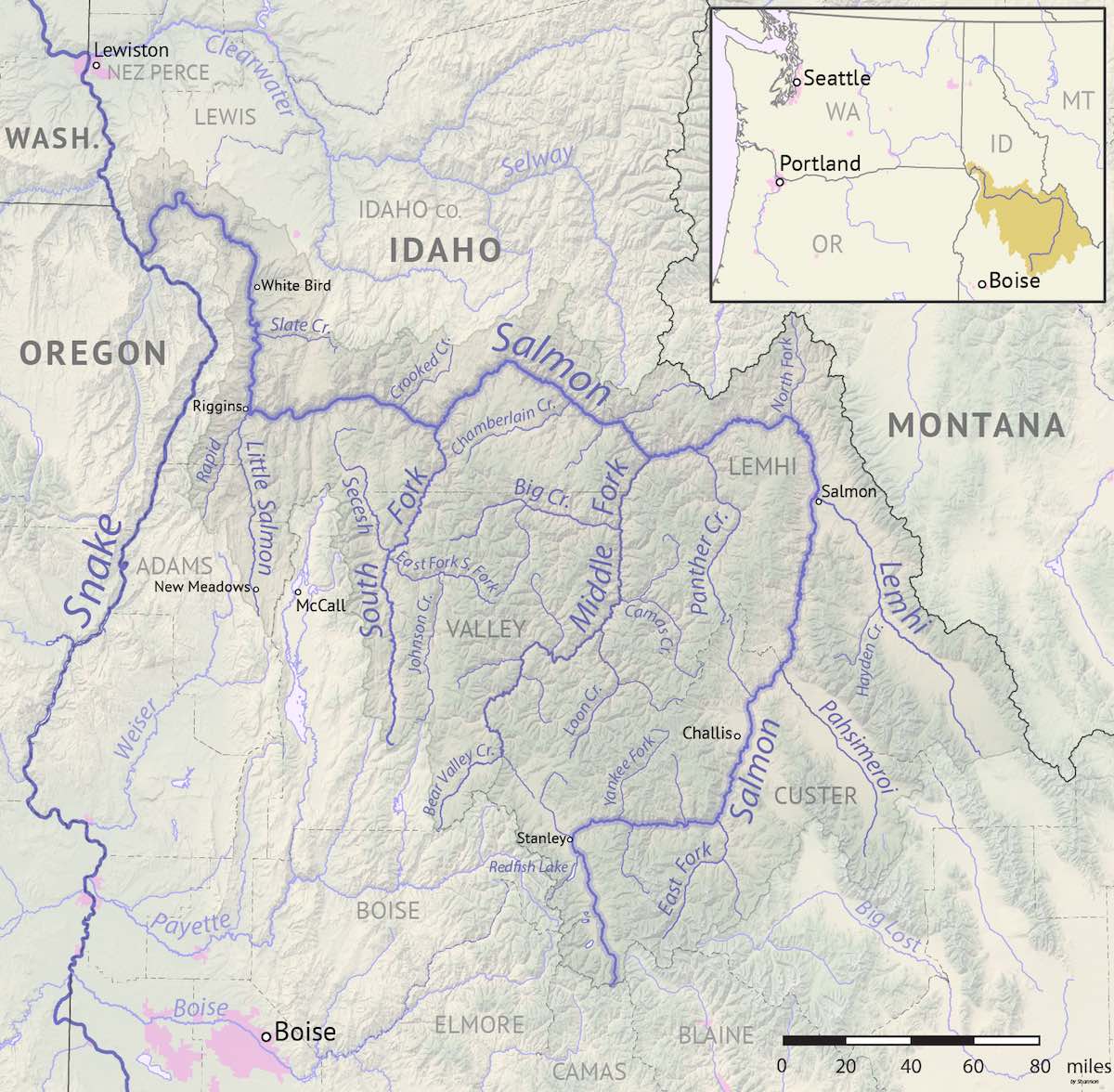 On a map, the heart of Idaho is the Middle Fork of the Salmon River, and its nearly two million-acre watershed. This is a big, wild heart.

The world comes to Idaho to run the Middle Fork, and taste for a week the wildness the river gathers. Idahoans can taste it any time we want. Whether from Paris or Pocatello, people who come to the Middle Fork leave exhilarated, and often redeemed.

Mountain Shoshoni and Nez Perce people have used the Middle Fork, and passed it on, for some 10,000 years. Today nearly all of it is public land, each one of us a co-owner. And almost all of it has permanent protection in the Frank Church River of No Return Wilderness. Thus secured, the Middle Fork is a cultural and economic engine, especially for central Idaho. It is also a place of pilgrimage.

Winter is its essential season. The watershed is a sponge, filled each year with snowmelt that is meted out through the year as glorious life. Salmon are its essential creatures. They have named its river and lands. They bring their ocean bodies up to 850 miles inland and 7,000 feet high to reproduce – and then, in death, feed plants, trees, insects, trout, ouzels, eagles, bears, otters and more.

Yet salmon are nearly gone from their river today. Biologists report that, in 2021, the Middle Fork watershed’s 500-plus miles of superb spawning habitat held just 362 salmon redds. (Redds are the nests female salmon scoop into streambed gravels, then fill with eggs.) Since 2017, for five years running, the best salmon habitat in the Northwest has hosted less than one redd per mile of stream. That is a flashing red light, whose message is extinction, soon.

Three Idaho scientists have estimated that the Middle Fork watershed hosted over 20,000 redds into the 1960s. Over 40,000 salmon! Such capacity still exists. The Middle Fork is the largest, highest, coldest, wildest, best-connected and best-protected salmon stronghold in the 48 states. The place being special, so are its Chinook salmon. Their wide native diversity, free of hatchery influence, equips them to persist.

There’s no mystery why this stronghold now holds so few salmon.

Downstream of Idaho, eight federal dams and 320 miles of reservoir have, since 1975, massively degraded the migratory habitat through which salmon reach and return from the North Pacific Ocean. Mortality also now comes from heat, steadily rising in the ponded reservoirs. Summer water temperatures are routinely at or above 70 degrees for two months, killing and depleting cold-water salmon. 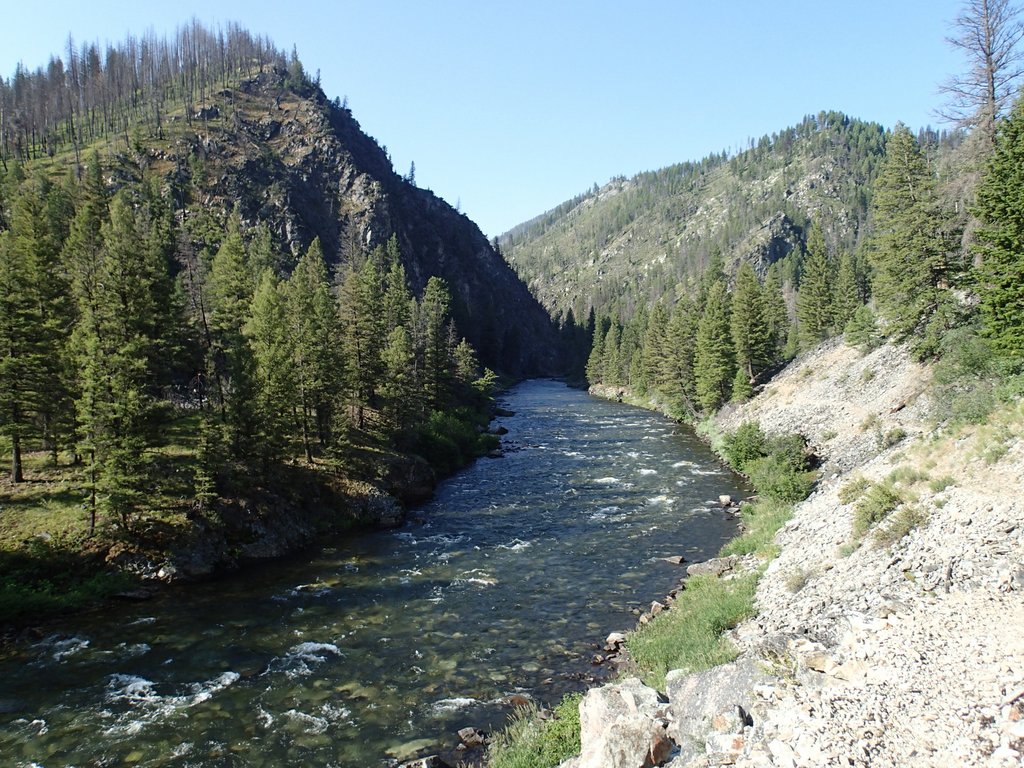 Kyle Dittmer, who studied climate change for Columbia Basin tribes, called the Middle Fork and the lands around it a “Noah’s Ark for Salmon,” our best chance to sustain salmon in an uncertain future. Five main reasons: its high cold spawning habitat, vast extent, high percentage of public and ceded lands, wide diversity within its salmon populations, and the comparatively hotter spawning conditions facing lower-elevation salmon. But the Ark in central Idaho meets an anti-Ark downstream. Salmon can survive a few dams; they did so into the 1960s, with four dams. But not eight, and not with the heat those added four dams now concentrate.

One Idaho political leader has responded. Congressman Mike Simpson has developed a balanced plan to remove four of the eight dams downstream, while extending life for the other four; replace and exceed the energy and agricultural benefits from the four dams that go; and expand state and tribal authority over federal salmon spending. Oregon Gov. Kate Brown and 57 Northwest tribes support his initiative. It will bring salmon, and steelhead trout, back into the Middle Fork and central Idaho.

So far, Idaho’s other elected leaders are sitting it out. Dismembering Creation in the evermore Salmonless River seems fine with them. The Shoshone-Bannock and Nez Perce Tribes see more deeply. The tribes’ skilled, prayerful advocacy for their own salmon people and traditions is defending all Idahoans, now and to come, against extinction of salmon in our state. Take a quiet moment, if you’re inclined, to send your thanks their way.

Spurred by tribal and non-tribal people in Washington, and by salmon-starved orca whales along their coast, Gov. Jay Inslee and U.S. Sen. Patty Murray of Washington are examining, in depth, if and how to restore the lower Snake River by removing its four dams. They promise a yes or no decision by July. If yes, the fulcrum of Northwest politics will shift, and Idaho salmon, including in the Middle Fork, will have what is likely a last chance.

I hope Murray and Inslee come see the Middle Fork this spring. If they come, they will remember. They will also better know what Idaho mountain salmon can do for people, justice, orcas, and resilience in Washington, if the lower Snake River is freed.

I believe I’ve been somewhere in the Middle Fork every year since 1986. For too many of those years, I let work keep my trips to one or two. Bob Dylan said it pretty well: ah, but I was so much older then. I’m younger than that now.