By Rocker Barker, special correspondent for the Idaho Statesman 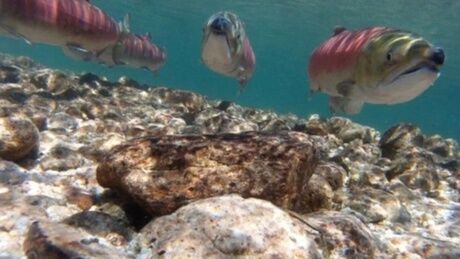 The first Snake River sockeye salmon raised in a $14 million hatchery that opened in 2013 returned to the Sawtooth Valley on Wednesday.

A sockeye that was placed in Redfish Lake Creek in the spring of 2017 from the Springfield Fish Hatchery in eastern Idaho returned this week after living two years in the Pacific Ocean. Idaho Department of Fish and Game biologists solved a three-year mystery in 2017 why hundreds of thousands of sockeye were released from the hatchery and no fish returned from the Pacific.

They watched thousands of the 230,000 salmon smolts released that spring die immediately from shock. Then biologists discovered the young salmon smolts had been dying after their release because of stress caused by its different water chemistry.

The water in the Springfield Hatchery has an unusually high level of calcium carbonate, making the water extremely “hard” while Redfish Lake Creek’s water is unusually “soft.” Idaho Department of Fish and Game solved the problem by acclimating the endangered salmon in the Sawtooth Hatchery near Redfish Lake before releasing the smolts into the Salmon River.

The sockeye that returned Wednesday actually had not been acclimated, said Dan Baker, manager of the Eagle Fish Hatchery. Few of the 2017 Springfield salmon survived their entry into Redfish Lake Creek. Officials like Baker can track where the fish came from and when from a computerized tag placed in each fish while in the hatchery.

“This was a little bit of a surprise,” Baker said. “We were expecting more fish from the 2018 release when we had a good outmigration to the ocean.”

So Fish and Game biologists still expect more sockeye from the Springfield hatchery to return this year.

But only 15 total sockeye have returned to the Sawtooth Valley this summer. The first sockeye, a healthy female that came from Redfish Lake, arrived in Idaho on Aug. 2. That’s down from the 1,516 that returned in 2014, the record high since four dams were built on the Snake River in the 1960s and 1970s.

The low productivity of all salmon and steelhead this year is due to the continuation of warm Pacific Ocean conditions from 2014 to 2017 — conditions that have not been seen in longtime historical data. In 2015, the Columbia, Snake and Salmon rivers were so hot in the early summer that of the 4,000 sockeye seen at the first dam on the Columbia, all but 157 died during the migration.

The sockeye program has suffered during the ocean downturn, but Baker is hopeful improving Pacific conditions, along with the adjustments made for the Springfield hatchery, will lead to a strong return in 2020. But they expect more sockeye to return through the end of September.

“I don’t see our numbers doubling from what we have now,” Baker said.

The Snake River sockeye have become symbolic of the multibillion-dollar effort to recover threatened and endangered salmon in the entire Columbia River basin since Lonesome Larry, one of five male sockeye to return to Redfish Lake Creek in 1991. He, along with the last 15 other sockeye that returned the year before, and those that returned in the next two years, held the valuable genetic code of the southernmost sockeye population, which climbs to 6,500 feet above sea level.

Fish and Game began its captive breeding program designed to preserve that genetic material, which has since been considered one of the great salmon conservation success stories. Officials saw an average of more than 1,000 fish returning annually until the 2015 setback.

The Springfield hatchery was completed in 2013, paid for by the Bonneville Power Administration — a federal agency that markets power from dams in the Northwest and whose ratepayers provide a major source of funding for regional salmon recovery. It was designed to add up to 1 million more sockeye that could be released into Redfish Lake Creek near Stanley.

Baker is hopeful they can still reach that ambitious goal.

“I’m hopeful we can reach that in the next couple of years,” he said.