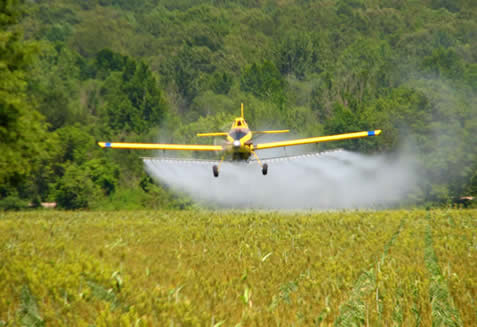 U.S. EPA finalized a settlement yesterday that prohibits the use of five pesticides in "buffer zones" around endangered salmon habitat in a win for environmental groups that had sued the agency.

The settlement stipulates buffers for five insecticides: diazinon, chlorpyrifos, malathion, carbaryl and methomyl. For aerial spraying, the chemicals will be prohibited within 300 feet of salmon habitat; for ground-based applications, buffers will shrink to 60 feet.

Environmental groups say the chemicals are highly toxic and can harm salmon and its habitat (Greenwire, June 6). But Republicans have characterized the settlement as part of a "sue and settle" trend where EPA and environmentalists make regulatory decisions behind closed doors.

In a statement, House Natural Resources Chairman Doc Hastings (R-Wash.) called the restrictions "baseless," citing a 2013 court decision that found a biological opinion on three of the pesticides "arbitrary and capricious" (Greenwire, Feb. 22, 2013). The National Marine Fisheries Service had released the opinion -- which called for 1,000-foot buffer zones -- in the wake of lawsuits from environmentalists.

"This is yet another example of closed-door settlements -- and not sound science -- driving policy decisions," Hastings said in a statement. "I fully intend to look further into the Obama Administration's decision ... which punishes our job creators and sets a terrible and potentially sweeping precedent that could impact thousands more acres of farmland in Central Washington and across the nation."

The settlement is part of a wider effort to ensure EPA works with NMFS and the Fish and Wildlife Service to evaluate the risk of pesticides on endangered species. Last month, FWS agreed to produce biological opinions on the same five pesticides within the next five years
(E&ENews PM, July 29).

The buffers set out in yesterday's settlement will stay in place until NMFS completes its own analysis on the pesticides. It will then fall to EPA to implement any necessary protections.

"Before this agreement, we lacked clear or consistent rules to protect the health of our rivers and salmon fisheries from these toxins," said Steve Mashuda, an attorney for Earthjustice, one of the conservation groups involved in the settlement. "This clears the road for the EPA and the Fisheries Service to continue to work together toward permanent protections that keep pesticides out of our waters.