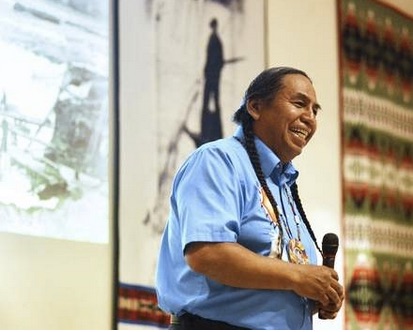 Although just a baby when the waters of Celilo Falls went silent just more than 60 years ago, Fred Hill passes on stories to keep the memory alive.

“I never got the privilege to see Celilo Falls,” he told a crowd during “Stories & Songs,” a May 31 Pepsi Primetime @ the Museum presentation at Tamástslikt Cultural Institute.

“The falls died, according to the stories and things that I’ve heard, on March 10, 1957,” added Thomas Morning Owl, who also is too young to have firsthand memories.

The presentation coincided with the museum’s current exhibit, “Celilo: Progress Versus Protest.” The display, which remains through July 14, tells the story of the demise of the falls as a result of construction of The Dalles Dam.

“We predicted many years ago that the dams would kill the salmon. We were a voice in the wilderness. We were told by the government and everyone else to keep our mouths shut — we need the electricity,” reads a caption attributed to Richard T. Pressey, a biologist who worked for both federal and state fish agencies.

On the morning of March 10, 1957, the massive floodgates on the newly constructed dam were closed. Within hours Celilo Falls, located approximately 13 miles upstream, disappeared beneath the rising water.

John Caldbick said the falls extended across the entire river. At approximately 40 feet high, he described the Columbia River as tumbling into a series of chutes, rapids, eddies and narrows through the basalt rock.

Throughout the early part of the 20th century, American Indians used dip nets, gaff hooks and spears to catch fish at Celilo Falls. Later, the elaborate construction of fishing scaffolds — or platforms — were popular from the mid-1930s on. After a number of deaths as fishermen were swept into the churning water, the Bureau of Indian Affairs required the use of harnesses that secured fisherman to the platforms or the shore.

Dorothy Cyr, who attended the “Stories & Songs” presentation, said her father-in-law, Wilfred Yallup, described the sound of the pre-dam falls.

“He said it was like a freight train,” she said. “It was really loud.”

Hill and Morning Owl said many stories have been passed down about the day the falls went silent. A lot of people, including some elders, Morning Owl said, didn’t think it would really happen.

“When the falls died, the sound died,” Morning Owl said. “You could just hear the wind and the sound of people crying. They wailed.”

For thousands of years, Celilo Falls was a gathering place for the Plateau peoples — a place where they fished, traded goods and shared common bonds. In addition to seven species of salmonids, the museum display indicates Celilo was known for its lamprey, mussels, sturgeon and other fish.

“She talked about getting smoked fish or dry fish,” he said. “That was a big staple.”

Because of the falls, Celilo was one of the largest trading centers in North America. People traveled by horses, boxcars and later hitchhiked or drove to fish, exchange goods or fellowship with others.

“We didn’t need a newsletter. The elders would tell everyone what was going on,” Hill said. “Everything was storytelling ... there was a lot of visiting.”

Morning Owl has been active in the modern day version of Celilo — now the home of a small Indian village and the Celilo Longhouse. The falls have been replaced by a slack-water lake.

People still fish and gather for ceremonies. Cyr stops there every chance she gets, bringing youths from the reservation to see the area.

“I make them take a rock. I tell them to take a piece of Celilo with you,” she said. “There’s a lot of our history there.”