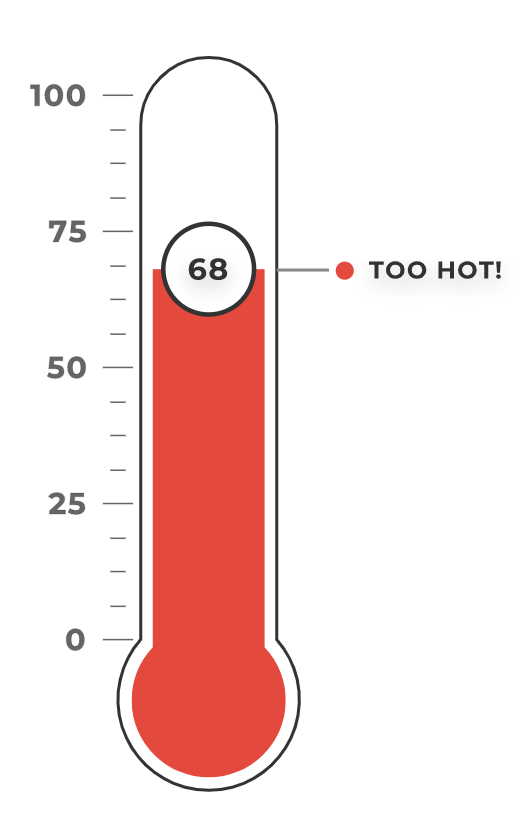 At the confluence of the Columbia and Yakima rivers in Southeastern Washington, for instance, summer water temperatures have been recorded as high as 90 degrees.

Blame dams, levees and other concrete additions to the river. And, of course, climate change.

All salmonids — chinook, coho, sockeye, steelhead — suffer if the water they live in spikes above 68 to 70 degrees. Anything above 70 degrees increases stress and the likelihood of fatal diseases.

In water above 74 degrees salmon stop trying to swim altogether. At that point, many will die.

Swimming in warm water requires fish to expend fat stores and burn more energy than they otherwise would.

As a result, by the time they reach spawning grounds, gonadal functions may be impaired or fish may simply be too exhausted to spawn.

So what’s a migrating salmon or steelhead to do when confronted with a warming Columbia River?

What is a ‘cold water refuge’?

For salmon and steelhead moving up the Columbia River in summer — when water temperatures above 70 degrees are now commonplace — the answer to an increasingly inhospitable river lies in a relatively recent behavioral adaptation.

In growing numbers, salmon and steelhead have begun seeking relief in small pools of cool water. These pools form at points where mountain rivers and creeks feed into the Columbia.

Get used to that acronym. CWRs have become critical pit stops for migrating fish.

“These refuges are really telling about the way adult salmon are using habitat in the Columbia,” said Margaret Neuman, executive director of the Mid-Columbia Fisheries Enhancement Group, in Ellensburg, Washington.

Researchers became aware of the importance of CWRs in the Columbia River in the 1990s. Studies led by teams from the University of Idaho in the early 2000s established the current baseline of scientific knowledge about them.

But a 176-page EPA report due at the end of summer 2020 — the Columbia River Cold Water Refuges plan — will shed light on just how crucial CWRs have since become to salmon and steelhead survival.

The report is certain to become the touchstone document for assessing CWRs in the Columbia River.

In the lower Columbia — the stretch from its mouth at the Pacific Ocean to its confluence with the Snake River some 325 miles upstream near the Oregon-Washington border — EPA researchers assessed 191 sources of water input into the Columbia.

Of these 191 tributaries, just 23 qualified as CWRs — meaning the water they drain into the Columbia flows at high enough volume and significantly colder temperature to make a localized impact.

How important are these 12 primary refuges? Collectively, they constitute 97% of the total CWR volume on the lower Columbia River.

The two largest are located at the mouths of the Cowlitz River and Little White Salmon River, which empties into Drano Lake prior to entering the Columbia River. Both rivers are in Washington.

Perhaps the most astonishing find by researchers is the way salmon and steelhead are altering historic patterns of migration to dash from CWR to CWR on their way to upriver spawning grounds.

“During the peak CWR use period — late August-early September — we estimate that (as much as) 85% of the steelhead in the Bonneville Reach between Bonneville Dam and The Dalles Dam are in CWR, which is 0.2% of the total volume of water in this reach,” said John Palmer, senior policy advisor at the EPA Region 10 office in Seattle and the new CWR study’s primary author.

In other words, when temperatures are warm the majority of migrating fish aren’t even bothering with most of the Columbia anymore. They’re simply seeking out rare breaks from its punishing heat and regrouping before racing to the next refuge.

Starting in the 1930s, dams and the slackwater they produce have warmed summer temperatures in the Columbia River by about 2 degrees, according to the EPA. Climate change has additionally warmed the river by a little more than 2 degrees.

Conditions will get worse. Across the Columbia River Basin the trend is warmer water.

“There’s only so much cold water,” says Palmer. “It gathers in winter and spring, but slowly gets flushed out of the system (as summer progresses).”
So, given current models, are there enough CWRs to accommodate the needs of migrating fish?

In the lower Columbia, probably so.

East of the Cascades, however, rivers and streams flowing into the Columbia are generally warmer. That’s where the situation gets dire.

“We’re still examining the question,” says Palmer. “There are no refuges above the Deschutes River. So fish have to go from there past the John Day Dam up through the 76-mile John Day Reservoir. It’s the warmest stretch of the river and there’s really nothing there for them to escape those temperatures.”

Just below the McNary Dam, the Umatilla River can be considered a CWR only after late August and September, when it begins to run slightly cooler than the Columbia.

The Umatilla would need substantial upstream restoration to reestablish flow and lower its temperature before it could supply meaningful thermal refuge to fish in the hottest weeks of summer.

Waters begin to cool, if gradually, after the Columbia’s northward bend into Washington and eventually British Columbia.

From fire to frying pan

CWRs might sound like a welcome relief for salmon and steelhead. But any benefits they derive from CWRs are mitigated by a massive drawback.

“Fishermen know these areas because that’s where fish go. But they don’t refer to them as ‘refuges.’ They call ’em ‘fishing holes,’ right?” says Palmer.

Fish in a kettle is an apt analogy. There’s a reason large CWRs, such as Washington’s Drano Lake, attract commercially guided fishing expeditions from as far as Yakima. Anglers know their chances of landing fish increase in compact areas where fish cluster.

A 2009 study found migration success among steelhead that used CWRs was about 8% less than steelhead that didn’t use them. Fishing in CWRs explained the decreased survival rate.

It’s a cruel twist for migrating species. Fish are seeking cool refuges; in response, humans have made these refuges even more dangerous than the warm waters fish are so desperate to escape.

Palmer stresses the purpose of the coming EPA report is to provide information, not suggest mitigation efforts.

“We’re not in the fish-regulation business, we’re in the water-quality business,” he says.

“People in the salmon recovery world doing projects in these tributaries can help justify a project by saying, ‘Well, not only are we going to increase spawning and rearing habitat in the tributaries but it’s helping to cool the water, which will have a beneficial effect down river.’ People doing projects will think about this as an objective,” says Palmer.

Management policies have already been influenced by the evolving significance of CWRs.

In 2020, the Oregon Department of Fish and Wildlife closed all fishing during warm months at what the department calls “thermal sanctuaries” at the mouths of Eagle Creek, Herman Creek and the Deschutes River.

The EPA’s report could help build a case for more protections around CWRs.

Enhancement projects Although cold water refuges occur naturally, efforts to enhance them are popping up around the Columbia River Basin.

The Portland-based Lower Columbia Estuary Partnership is currently in the assessment phase of a thermal refuge enhancement project at the confluence of Oneonta and Horsetail creeks on the lower Columbia River.

“The concept is to construct one or more diversion structures that will promote expanded cold water plume formation by diverting warmer Columbia River water away from the confluence zone,” says LCEP physical scientist Keith Marcoe.

In 2019, near Benton City on the Yakima River, the Mid-Columbia Fisheries Enhancement Group (MCFEG) reconnected a small, cool groundwater spring to the river. It’s likely the Yakima River Mile 25 Thermal Refuge is the first such enhancement project on the river.

Coupled with downstream projects currently in development, the goal is to capitalize on critical sources of cool water in what the organization calls a “very hot portion of the Yakima River.”

“The spring is already naturally there; we’re trying to maximize how much positive impact it’s having on the river,” says MCFEG executive director Neuman. “We basically dug a little alcove into the bank … and added wood and planted trees along the spring area to try to keep the water cool. We installed (structures) to hold the spring-water back, just not let the spring-water all run off at once, but try to modulate it a little bit.”

A beaver has since settled in the area — beaver ponds can enhance cold water refuges — but it’s too soon to gauge the project’s long-term impact.

Government Cove, where Herman Creek spills into the Columbia River just east of Cascade Locks, was created when small islands in the river were artificially joined. The result is a protective barrier that collects and delays the flow of cool water from Herman Creek before it empties into the mainstem of the Columbia.

“It wasn’t built to be a cold water refuge but it’s turned into that,” Palmer said. “The cold water stays there for a while, and fish go into it.”

By far the largest and most used refuge, Drano Lake, east of Stevenson, Washington, is another unintentional refuge. The lake was created when a dike was built at the mouth of the Little White Salmon River to accommodate railroad tracks, and later State Highway 14.

“That already is kind of an artificial CWR,” Palmer said. “So it’s not impossible to think about doing some of this.”How much help, really?Among some environmentalists, CWRs are increasingly seen as an important piece of salmon recovery strategies.

Is that hope misplaced? Is human enhancement of CWRs a too-little-too-late solution to the Columbia’s epic problems?

“From our perspective, the problem with temperature in the Columbia and Snake is that the whole river is too hot,” says Miles Johnson, senior attorney for Columbia Riverkeeper. “I don’t mean to say that cold water refuges are not important and worth protecting. But the lower Snake and lower Columbia are too hot for salmon and steelhead and it’s dams and reservoirs and climate change (causing the problem).”

The implication is only large-scale solutions can fix the large-scale problems in the Columbia and Snake.

Especially considering their vulnerability to fishing, Palmer admits the overall value of CWRs is “a big question.” But he’s more bullish on their role.

He points to a modeling study conducted at an EPA lab in Corvallis, Oregon. In a theoretical Columbia River in which all CWRs were removed, the simulation showed stress levels in salmon and steelhead more than doubled.

Columbia Insight, based in Hood River, Oregon, is an online, nonprofit publication focused on environmental issues of the Columbia River Basin.