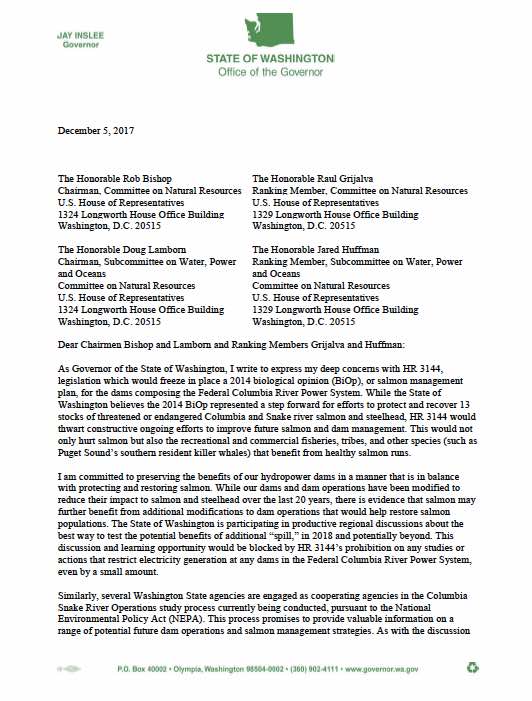 Please see the Dec. 5 statement from Gov. Inslee explaining his opposition to HR 3144, a bill introduced by Rep. McMorris Rodgers (R-WA) earlier this year that would, if it were to become law, reverse several recent court decisions, undermine the Endangered Species Act and National Environmental Policy Act, and harm endangered wild salmon and steelhead populations by rolling back increased spill over the federal dams on the lower Snake and Columbia Rivers, ordered by federal court in May 2017.

Salmon and orca advocates in Washington State and across the Pacific Northwest appreciate that Governor Inslee has issued this strong statement and clearly communicated why he believes passage of HR 3144 into law would deliver a terrible blow to salmon and orca populations and fishing communities, and derail current efforts in the region to protect and restore healthy, abundant populations of wild salmon and steelhead in the Columbia and Snake Rivers.

Link to a HR 3144 factsheet from Earthjustice/Save Our wild Salmon describing the bill and its impact on salmon, ESA, NEPA, and recent court decisions:
http://www.wildsalmon.org/images/factsheets-and-reports/2017-HR3144-SOS-EJ-Factsheet-FINAL.pdf