A draft power plan for the Pacific Northwest, due for release this summer, outlines challenges for defenders of hydropower, as well as opportunity for those who say its time for some dams to go.

The report, from the Northwest Power and Conservation Council (NPCC), forecasts power demand in the region will remain flat or slightly decline through 2030.

That last development places some daunting new challenges in front of utilities in the region.

The bulk of power produced in the Columbia River Basin comes from 31 dams whose power output is marketed and sold by the Bonneville Power Administration (BPA). Less than half of it is put to use by consumers inside the Pacific Northwest. The rest is sold south via high-capacity power lines known as the Western Intertie Network to electricity-hungry cities in Southern California.

These “secondary,” outside-the-home-territory transactions were once a reliably lucrative arrangement for the BPA. On the open market for electricity sales, midday demand sent prices soaring.

The federal power marketing authority could meet California’s needs, still keep the lights on in Seattle and Portland, and collect handsome profits from its California ventures. This windfall, in turn, was used to buy down rates for what the BPA calls its “preference” customers inside the Pacific Northwest.

This customer base is comprised of public utility districts and rural electrical co-ops around the region, who rely on long-term “firm” power contracts with the BPA.

The happy result for these preference customers has traditionally been some of the cheapest electricity rates in the country. But with the rapid development of California’s ambitious renewable energy policy, hydropower’s long joyride on the Columbia River appears to be slowing down. 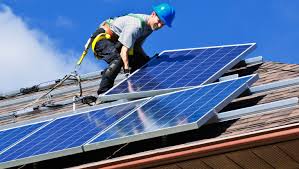 The contrast between California’s energy transformation and the Pacific Northwest’s aging, mid-20th century dams is startling. Since the early 2000s, California has built over 12,000 megawatts of solar power. In terms of capacity, this’s nearly equal to what those 31 dams on the Columbia produce.

California has taken a giant leap toward modernizing its energy system to reflect 21st-century realities.

By contrast, the Columbia River’s flagship power plant, Grand Coulee Dam in Washington, was built in 1937. The average life expectancy of a dam is 50 years. (More than half of the dams in the United States have exceeded that time frame.)

But the trouble isn’t limited to infrastructure that’s aging out.

The economics of solar power are providing utilities as well as consumers with unprecedented opportunity to make the switch. The price of a solar panel has dropped 89% since 2010, according to the International Renewables Agency.

Last year marked the beginning of a solar mandate for residential construction in the Golden State, with every new home there required to feature solar panels on its roof.

Utility-scale solar projects have spread across California. Last year, the 8Minute solar energy company inked a deal with the City of Los Angeles to provide 400 megawatts of solar power, with 1,200 megawatts of battery storage to boot, for less than $25 a megawatt hour.

For comparison’s sake, the four lower Snake River dams average 900 megawatts of power production annually. But that energy costs significantly more than what 8Minute will deliver to Los Angeles. BPA customers on firm power contracts are paying $37 a megawatt hour.

Since 2009, BPA’s rates have risen 30%. Aging dams, deferred maintenance and upgrades, and funding federal pensions for the BPA’s 2,100 employees virtually guarantee the agency’s rates are going up.

“We hit a place where standard industry practices diverged from the policy landscape in the West.” —Ben Kujala, Northwest Power and Conservation Council

Meanwhile, the price of solar is predicted to fall further, at least through 2030.

Steve Kern, the former head of Cowlitz PUD in southwest Washington, summed up the tenuous nature of the BPA’s future in 2018, not long before he retired.

“A financial cliff is coming,” said Kern, noting that BPA’s rates were already higher than the going market rate, and its power prices are forecast to be 55% above those market rates by 2028. Who’s going to sign up for BPA power at those prices?”

Gone, too, is the ready availability of profitable midday electricity sales. Energy wonk blogs buzz with allusions to “the duck curve”—a glib turn of phrase that describes how electricity prices are now lowest in the middle of the day when they used to be highest—thanks in large part to solar panels’ peak production that occurs then.

So much electricity is available now in midday, in fact, that prices routinely dip below $10 a megawatt hour, and occasionally head into negative territory—meaning producers are paying consumers to take it.

The duck curve helps explain why the BPA’s debt problems—$15 billion in the red—are mounting. Cash reserves of almost a billion dollars in 2009 were reduced to near zero in 2019 on the agency’s power sales ledger.

A profitable summer of 2020—good water supply and a hot Southern California summer—helped shore up finances in the short term. But with historic drought gripping the West this summer, quick profits are less likely.

The long-term outlook isn’t so rosy. And it isn’t just critics of the BPA who are pointing this out.

The Northwest Power and Conservation Council (NPCC) is an interstate compact between Idaho, Washington, Oregon and Montana, created with the passage of a 1980 federal law that aimed to balance the needs of salmon recovery and electricity production in the Columbia River Basin. The governors of each state appoint two representatives to the eight-person voting body, which ultimately ratifies or denies a range of Council policies.

Council staff writes plans and recommendations for the Bonneville Power Administration, for both its salmon recovery efforts as well as ensuring an adequate and reliable supply of electricity.

The Northwest Power Act, the law that created the NPCC, isn’t perfect: its critics point out it lacks regulatory teeth; that is, the recommendations made by the Council amount to little more than that.

Ed Chaney, who in the 1980s was Idaho Governor Cecil Andrus’ right-hand man on salmon recovery issues, and who has sued the Council several times over its failure to institute effective salmon recovery policy, is skeptical of NPCC’s continued existence.

“The Council has accomplished the incredible feat of overseeing the expenditure of billions of public dollars and produced the opposite of what the Power Act required,” says Chaney. “Snake River salmon and Bonneville are now both threatened with extinction.”

Chaney has tracked how the Council’s work on salmon recovery was ceded back to the BPA and NOAA over the years as litigation over endangered salmon stocks began to dominate recovery plans.

Despite abdicating the salmon recovery portion of its mission, every five years the Council still produces a report on the energy picture in the region, and makes forecasts based on a survey of factors that affect power supply and demand.

As work began on the current draft plan, Ben Kujala, the NPCC’s power division director, was initially taken aback by the results of the model they deploy to help craft the Council’s energy report. It was forecasting the need for a massive build-out of gas-fired power plants, a move at odds with what was happening on the ground.

“The forecast still had elements of how we’d forecast prices in our previous power plans,” says Kujala. “But we had hit a place where standard industry planning practices had diverged sharply from the policy landscape in the West.”

The model’s inputs were updated to reflect that current reality. A final draft of the ninth power plan will be ready sometime this summer, but initial findings of the plan have been previewed on several occasions in Council proceedings.

The draft report confirms the tumultuous market conditions of the last decade aren’t an anomaly—the way we produce and distribute electricity is undergoing a profound change.

Kujala, who moved over to the NPCC from a job with the Bonneville Power Administration as an energy analyst, cautions that the decision for utility managers isn’t as simple as signing an energy contract with a solar provider. He points out that utility managers and their commissioners might be inclined to stick with the BPA, paying more for power that comes with perks.

“Convenience has value,” says Kujala. “You sign up with a [BPA preference customer contract] and you get reliable power that is shaped to meet your customers’ demand. It’s a nice tidy package delivered to your doorstep.”

On the flip side, the vulnerability of that same contract is the vagaries of its price: BPA doesn’t set a fixed rate for its preference customers’ power purchases. When rates soar, as they have over the past decade, those same customers at least cast a furtive glance at what might be a better deal elsewhere.

So is solar a better deal?

It’s a decision, says Kujala, that utility managers face with some trepidation—but not, if he can help it, without good information to aid in deliberations. Where the future lies will very much depend on the size, location and specific needs of individual utilities.

“A solar project has a fixed price,” he says. “You know what you’re getting. Sure, you might have a few cloudy days, but if you do a $25-a-megawatt solar project, you’re pretty sure you know what’s coming out.”

By contrast, a drawback of a long-term contract with the BPA, says Kujala, is price uncertainty, particularly in an era of profound change in the energy business. A 20-year term is standard for preference customers.

Tony Jones is an Idaho energy economist. He’s studied the federal hydropower system on the Columbia for three decades, and has a piece of advice for utility managers.

“You don’t want to be the first to sign one of those 20-year contracts,” he says. “There’s a scenario here where a few key customers head for the exits. That leaves the remaining customers with rate increases to make up the cost of those departing customers.

“In any business, a shrinking customer base is a death spiral. And you don’t want to be the PUD in the region stuck with the prospect of trying prop up the BPA.”

The best way for Bonneville to survive, says Jones, is to get rid of its most vulnerable assets. The worst of the lot, he figures, are the four lower Snake River dams.

Kujala has been asked often since Idaho Rep. Mike Simpson proposed a concept for removing the four lower Snake River dams about whether the NPCC’s draft power plan will provide any insight into the feasibility of that prospect.

He says the updated model they’re using is capable of providing a picture of what the federal hydropower system would look like without the Snake River dams. But in part because of the hotly contested politics of dam removal, he’d want the input of Council representatives.

“What the Council does well is we pull everyone into a room, we make them all sit there and we go through everything in exhaustive detail,” he says. “We say ‘these are the inputs you wanted, these are the conclusions that came out,’ and we go through those slowly and methodically. We absolutely have the capability of doing it, and I think we could do it in maybe a more nuanced way than what’s been done so far. But it would be a big process.”

The public will have a chance to weigh in on the draft plan at an as-yet undetermined time this summer, an opportunity Kujala encourages citizens to take.

“Part of what we’re here for is to be helping people understand what’s going on in the power system,” he says. “We want to be one of the places people can turn to.”