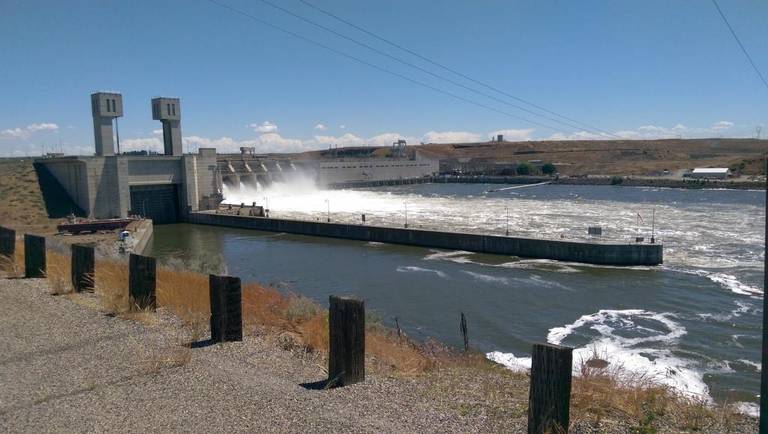 The economic consulting firm ECONorthwest released a report this week analyzing the tradeoffs associated with removing the four lower Snake River dams in Washington, suggesting the benefits of removal exceed the costs by $8.6 billion, and thus the region would likely be better off without the dams.

“Benefits accruing to the public from a restored natural river system and a reduced extinction risk of wild salmon outweigh the net costs of removing the dams by over $8.6 billion,” says the report. “On a per-household basis, we find there a willingness to increase electricity bills by an average of $39.89 per year to help protect wild salmon.

“However, removal of the dams would be justified at any value over $8.44 per year, meaning that removing the dams would create an average of $31.45 of surplus-value per household, per year.”

The report includes a benefit-cost analysis and economic impact analysis of removing the dams.

In response to the report, Northwest RiverPartners, representing consumer-owned utilities, ports, and businesses, said “this report is potentially harmful and misleading to stakeholders on both sides of this critical conversation.”

Currently, federal agencies are developing a draft environmental impact statement for the Federal Columbia River Power System’s impacts on salmon and steelhead listed under the Endangered Species Act. The draft won’t be complete until February, but federal agencies have made public five alternatives, including a no-action or status quo alternative and an alternative that includes breaching lower Snake River dams.

The consulting firm says “every effort was made to incorporate publicly available information in an objective, unbiased manner. Some inputs to this study remain a topic of substantial public debate, while others are based on estimates from scientific fields in which we are not experts or sufficient data does not exist. We did not seek to serve as the arbiter of disagreements or scientific uncertainty.

“Rather, we evaluated the quality of all available information, made judgments on the validity of estimates, and incorporated reasonable ranges where appropriate. ECONorthwest has not independently verified the accuracy of all such information and makes no representation regarding its accuracy or completeness.”

“The Lower Snake River Dams provide valuable services, however a careful exploration of the range of economic tradeoffs based on publicly available data suggests the benefits of removal exceed the costs, and thus society would likely be better off without the dams.,” says the report. “The best available information to date indicates that the substantial non-use and recreational use values gained from removal more than offset the costs of removal, even with increased power and transportation costs.”

Some of the report’s conclusions:

The report says the lower Snake River dams “supply a small share of the energy needs for the Pacific Northwest region,” and account for “less power than the Bonneville Power Administration currently exports to other regions, primarily California. With cheaper renewable energy sources entering the market, the conventional wisdom of hydropower generating the lowest-cost electricity is no longer accurate.”

The report claims that while the “dams add useful capacity to ensure system reliability during certain months of the year, those capacity services could be provided by other resources at relatively low cost.”

The report notes that approximately 2.2 million tons of agricultural products—mostly grain destined for export—move by barge through the four dams on the lower Snake River each year.

“Although barge shipping is more cost-effective than truck or rail, significant federal appropriated funds are dedicated to maintaining the locks that allow barges to travel up and down the river. Even after accounting for the public costs of increased emissions, changes in accident costs, and the higher prices of shifting to truck and rail, the federal government still spends more money than the public gets back. The benefits produced by the lock system on the Lower Snake River do not justify its continued operation, even without removal of the Lower Snake River Dams.”

Only 13 percent of farmland within five miles of the lower Snake River is irrigated.

This land is mostly located at the downstream end near the confluence with the Columbia River where several other water storage and conveyance projects operate or are under development.

The report says the “loss of irrigation to this area could result in substantial economic losses to some growers irrigating.”

“The costs of upgrading groundwater wells and surface diversions should be less than $200 million in total, based on an engineering cost analysis. The high rate of non-irrigated farming in the area suggests such practices are a reasonable choice for farmers. Furthermore, the growing demand for irrigated agriculture activity and storage capacity downstream along the Columbia River suggests that any reduction in water use along the Lower Snake River would likely be used by downstream water users. Depending on funding sources for upgrades to infrastructure and decisions to irrigate, any impacts to the agricultural industry would most likely be distributional in nature.”

Some of these activities will no longer occur with removal of the dams, however, restoration of a natural river system will lead to an increase in higher value river recreation trips. These new environmental resources will benefit both the users that enjoy them, as well as the tourism based-businesses in Clarkston, Washington, and Lewiston, Idaho.

The report says analysis of the economic impacts of removal finds that although some sectors of the regional economy will experience a shift, “dam removal is fundamentally a massive public works project that will increase regional net jobs, income, and output.

“Dam removal would result in a reduction in spending in some sectors (e.g. grain farming and dam operations and maintenance), however the physical costs of removing the dams would also produce a set of positive economic impacts, albeit potentially for a different population. Removing the Lower Snake River Dams will result in a net increase of $505 million in output, $492 million in value added, $408 million in labor income, and 317 annual jobs.”

Our mission at Northwest River Partners is to encourage the balanced use of Columbia Basin rivers while collaboratively working towards solutions that help hydropower and salmon coexist and thrive. The nature of our industry entails controversial and highly charged viewpoints and for that reason we encourage scientific, extensively researched, and balanced perspectives.

Through this lens, we find that the recently released ECONorthwest Study funded by Vulcan Inc. is fundamentally flawed in its controversial and biased methodology. While we appreciate and respect their goal to work towards the best economic outcomes for our region, we feel that this report is potentially harmful and misleading to stakeholders on both sides of this critical conversation.

The study purports to offer an economic impact analysis of removing the Lower Snake River Dams but its conclusion is based almost entirely on one question – asked in an unscientific manner – through a survey conducted by an anti-dam advocacy group. From this one question comes the study’s estimation of billions of dollars of supposed value.

There are many gaps and inconsistencies in the report including several questions around the study’s power, transportation, and irrigation assumptions. However, most alarming is the type of valuation used in this study which is referred to in economics as the “Non-Use Valuation” or “Contingent Valuation Method”.

This approach takes a sample of people, asks how much they’d pay for something, and then projects that amount across the entire population within a region or even the nation. It is a highly controversial technique because studies have found that respondents will generally overstate how much they would pay when you ask them about a specific cause.

In the ECONorthwest report, this effect was furthered by the fact that the question claimed full recovery of salmon and improved water quality. However, the full report goes on to say that there is “extreme uncertainty” about the actual impact of removal, and that water quality would be poor for years following removal. This directly contradicts what was presented to survey respondents and shows the inaccuracy of the estimated non-use value.

Noted economists have said this is an unreliable method for determining economic or public policy and, in our view, it completely undermines the validity of the study.

We fully support work that is science-based, such as the current effort being undertaken as part of the National Environmental Policy Act. As part of the NEPA process, the federal government is analyzing the societal, environmental, and economic costs and benefits of breaching the four lower Snake River dams. The Columbia River System Operations Environmental Impact Statement – or CRSO EIS – analysis is currently underway, and the draft report is due in February 2020.

We are keenly aware of the many misconceptions plaguing policy decisions on hydropower and salmon recovery. Regardless of viewpoint, we encourage participants on both sides to strive towards sharing transparent, reliable, and science-based data as we work towards solutions that benefit all stakeholders and the equitable use of our rivers.

U.S.  Reps. Cathy McMorris Rodgers (R-WA) and Dan Newhouse (R-WA) released a joint statement following the release of a privately-conducted study regarding the removal of the Lower Snake River Dams:

“This privately-funded study is a slap in the face of our state’s agricultural economy. It is another example of Seattle-based interests seeking to disrupt our way of life in Central and Eastern Washington. Increases in carbon emissions, higher electricity bills, and billions of dollars in infrastructure improvements that would be needed for irrigation and transportation hardly come across as a ‘public benefit.’ This report, like many others before it, fails to consider the consequences of dam breaching for communities and industries throughout the Northwest,” said Reps. Newhouse and McMorris Rodgers.

They continued, “We trust the federal scientists and experts who are currently conducting a legal and comprehensive environmental impact study of the Snake River Dams. They should be able to do their jobs without groups from downtown Seattle dictating a cursory conclusion.”