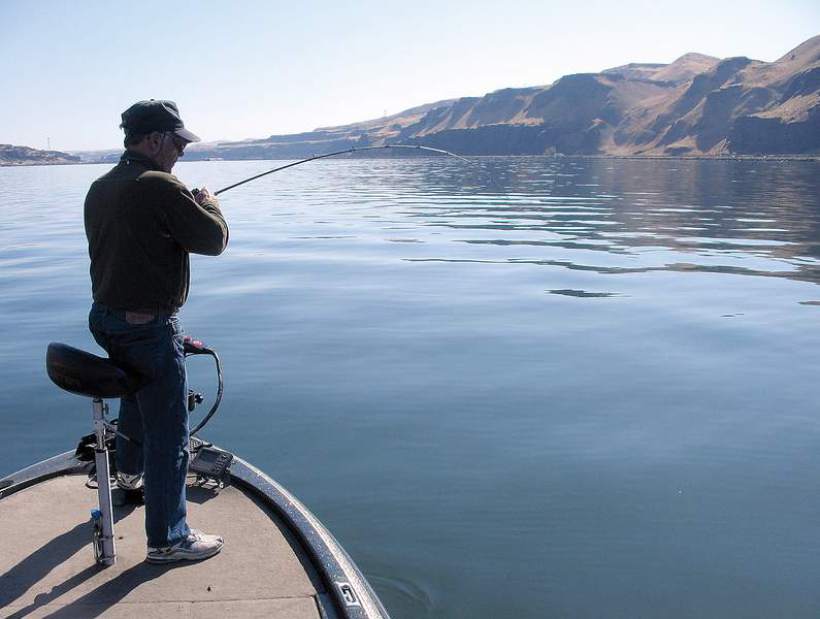 Just half the average number of upriver spring chinook salmon are forecasted to enter the Columbia River this year, a decline in abundance that will limit spring recreational angling.

The two-state Columbia River Compact met this week to determine how much recreational fishing will be allowed given the paltry preseason forecasted return of just 99,300 spring chinook, 14 percent less than last year’s actual return of 115,081 fish and 50 percent under the 10-year average of 198,200 (2009 – 2018), according to the February 20, Compact Fact Sheet No. 4.

Limiting fishing areas in the lower Columbia River is a low expected return of fish to the Cowlitz and Lewis rivers in southwest Washington.

According to the Washington Department of Fish and Wildlife, the spring chinook run to the Cowlitz River is projected to be just 11 percent of the 10-year average.

The number will fall short of meeting hatchery production goals, WDFW says. The Cowlitz goal is 1,337 fish and the Lewis goal is 1,380 fish.

Ryan Lothrop, Columbia River policy coordinator for the Washington Department of Fish and Wildlife, said the forecast for upriver fish is the lowest since 2007, but still higher than 1995 when just 12,800 fish returned. He added that this year’s low return is largely the result of poor ocean conditions, which have complicated fisheries management in recent years.

"Experience has shown that warm-water ocean conditions present a challenge to salmon survival," Lothrop said. "As in the 1990s, we have observed that cyclical warming effect during the past few years with similar results. During these times, we have to be especially cautious in how we manage the fishery."

Generally, spring chinook fishing opens March 1 in the lower Columbia from Buoy 10 near Astoria to Bonneville Dam. However, to meet the Cowlitz and Lewis escapement goals, the Columbia River will be closed downstream of the confluence of the Lewis and Columbia rivers beginning March 1. The mouth of the Lewis is about 68 river miles from the well-known, popular Buoy 10 recreational fishery.

At the Compact meeting, Wednesday, Feb 20 in Portland, WDFW’s Bill Tweit, special assistant, said the state would likely close the two Columbia tributaries to fishing for spring chinook, which it did that afternoon, closing both rivers to spring chinook fishing, effective March 1. However, the agency left the rivers open to hatchery steelhead angling.

In public testimony, fishing guide Bill Monroe Jr. suggested that Washington also consider closing the Kalama River to protect both spring chinook and steelhead. He said that as some popular rivers are closed, others, such as the Kalama (upstream of Bonneville Dam), could be fished fairly heavily. WDFW, instead, reduced the daily limit of chinook to one fish, but left open fishing for steelhead.

Geoff Whisler, this year’s lead of the US v Oregon Technical Advisory Committee, which develops the preseason forecasts and will update the forecast sometime in May, said that the 10-year average for 50 percent of the run to pass Bonneville Dam is May 8. However, for the past two years the date has slipped. In 2017, about one-half had passed by May 16, and it was May 17 in 2018. TAC will usually wait to provide a run update until it determines about half of the run has passed the dam.

Warning not to overharvest chinook early in the season and to spread out harvest over the run (the spring chinook run is considered chinook passing Bonneville between March 1 and June 15, according to the Fact Sheet), Bruce Jim, Jr. of the Confederated Tribes of the Warm Springs Indians, said the below average forecast is due to “inhospitable ocean and river conditions.”

“With just 4,900 fish available, the tribes expect cautious management,” he said. “We’re concerned about concentrating fishing in the early season.”

With only 8,200 wild spring chinook forecasted for the Snake River, Lance Hebdon of Idaho Fish and Game said “We appreciate that you manage around the Lewis and Cowlitz rivers, but we have the same concern. As forecasted, we will not meet our broodstock goals this year.”

He asked the Compact not to “front-load” harvest downstream this year and leave fish in the river for Snake River harvest.

The treaty fishing harvest impact on Endangered Species Act-listed wild spring chinook with the current run forecast is 7.4 percent, according to Stuart Ellis of the Columbia River Inter-Tribal Fish Commission and a member of TAC. The non-tribal impact on ESA fish is 1.6 percent of the wild spring chinook.

“So, if the forecast (at the run update for the Idaho wild fish) drops by the equivalent of one fish, those impacts will drop to 7 percent and 1.5 percent,” he said. “However, right now the non-treaty allocation is buffered by 30 percent and that could capture a potential reduction in Snake River fish.”

On the Willamette River, chinook salmon and steelhead seasons will continue as planned under Oregon sport fishing rules, according to an Oregon Department of Fish and Wildlife news release. This year, ODFW fishery managers are forecasting a return to the Willamette of 40,200 adult chinook, which is up from last year’s actual return of 37,441 adults. The Sandy and Clackamas rivers are also open year-around for retention of hatchery chinook, steelhead and coho.

"Anglers will still find some good fishing opportunities in the Columbia River Basin this spring, but conservation has to be our first concern," Lothrop said. "We have a responsibility to protect salmon runs listed under the federal Endangered Species Act and get enough fish back to the spawning grounds and hatcheries to support future runs."

In the Columbia below Bonneville Dam, the modified recreational spring chinook season begins Friday, March 1 and is approved through Wednesday, April 10.

What’s different this year is the area that will be open to angling: from Warrior Rock (St. Helens) upstream to Beacon Rock for both boat and bank fishing, plus bank angling only from Beacon Rock upstream to the Bonneville Dam deadline.

The Compact also ruled on angling upstream of the dam. Fishing will open Monday, April 1 and be open through Sunday, May 5. The open area for both boat and bank anglers is from the Tower Island power lines approximately six miles below The Dalles Dam upstream to the Oregon/Washington border. From the Tower Island power lines downstream to Bonneville Dam, only bank angling is allowed.

The daily bag limit for areas above and below the dam is two adult chinook or steelhead per day, of which only one may be a chinook, and only adipose fin-clipped (hatchery) fish may be kept. Shad may also be kept.