CBB: Salmon Fishing Rules Off NW Coast To Be Guided By Need To Protect Low Numbers Of Chinook 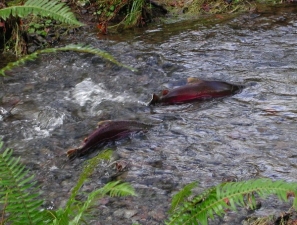 With a strong coho salmon run expected this year, but low estimates of chinook salmon, the Pacific Fishery Management Council has developed three options with quotas for fishing off the Washington coast.

The Washington Department of Fish and Wildlife has packaged the three options that include catch quotas and areas where fishing is allowed with the aim of protecting the limited number of chinook, the primary food of threatened southern resident killer whales. WDFW now wants to know what the public prefers. The agency has put the options out for public review and will host a public meeting in March.

The three options for ocean salmon fisheries were approved Tuesday, March 5, by the PFMC at its meeting in Vancouver. With input from NOAA Fisheries, Tribes, states and others, the PFMC establishes fishing seasons in ocean waters three to 200 miles off the Pacific coast.

The three alternatives are designed to protect the low numbers of chinook expected to return to the Columbia River and Washington's ocean waters this year, said Kyle Adicks, salmon fisheries policy lead for WDFW.

"With these alternatives in hand, we will work with stakeholders to develop a final fishing package for Washington's coastal and inside waters that meets our conservation objectives for wild salmon," Adicks said. "Anglers can expect improved opportunities to fish for coho salmon compared to recent years while fishing opportunities for chinook likely will be similar to last year."

Like last year, the 2019 forecast for Columbia River fall chinook is down roughly 50 percent from the 10-year average, WDFW said. About 100,500 hatchery chinook are expected to return to the lower Columbia River. Those fish – known as "tules" – are the backbone of the recreational ocean fishery.

On the other hand, fishery managers estimate 905,800 coho will return to the Columbia River this year, up 619,600 fish from the 2018 forecast. A significant portion of the Columbia River run of coho contributes to the ocean fishery, WDFW said.

The options include the following quotas for recreational fisheries off the Washington coast:

Option 3: 22,500 chinook and 94,400 coho. Marine areas 1, 3, and 4 would open daily beginning June 29 while Marine Area 2 would be open five days per week (Sunday through Thursday) beginning June 16. There would be no late-season fishery in Marine Area 3.

Fisheries may close early if quotas have been met.

WDFW is working with tribal co-managers and NOAA Fisheries to take into account the dietary needs of southern resident orcas while developing salmon fishing seasons, the agency said. The declining availability of salmon and disruptions from boating traffic have been linked to a downturn in the region's orca population over the past 30 years.

"We will continue to assess the effects of fisheries on southern resident killer whales as we move towards setting our final fishing seasons in April," Adicks said.

Chinook and coho quotas approved by the PFMC will be part of a comprehensive 2019 salmon-fishing package, which includes marine and freshwater fisheries throughout Puget Sound, the Columbia River and Washington's coastal areas. State and tribal co-managers are currently developing those other fisheries.

State and tribal co-managers will complete the final 2019 salmon fisheries package in conjunction with PFMC during the PFMC’s April meeting in Rohnert Park, Calif.