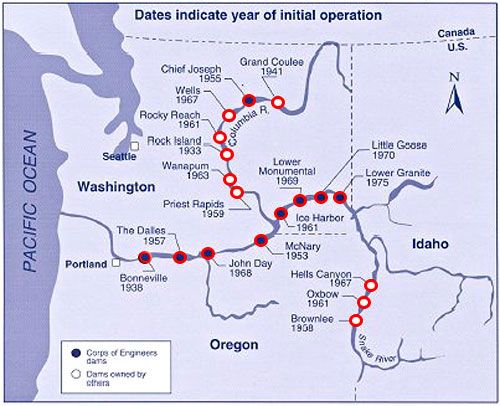 “The science is clear that removing the earthen portions of the four lower Snake River dams is the most certain and robust solution to Snake River salmon and steelhead recovery,” said Oregon Gov. Kate Brown in a letter last week to Washington Gov. Jay Inslee.

“No other action has the potential to improve overall survival two-to-three-fold and simultaneously address both the orca and salmon recovery dilemma while providing certainty in the legal challenge that has complicated operations for decades,” Brown wrote.

However, Brown was to careful note that dam removal in her view was a long-term solution and should not take place before extensive and expensive mitigation actions to protect other river uses are in place.

“I believe restoring the lower Snake River must be a key presumption of our long-term solution for salmon and orca recovery,” Brown said, “But much must be done before this is accomplished in order to help minimize and mitigate for potential harm to other vital sectors. Among other considerations, this includes an affordable, nimble and reliable power system that can help us to integrate renewables to meet our climate goals; continued water supplies for agriculture and municipalities; and efficient and affordable ways to get commodities to market.”

Much of the letter focused on efforts to halt the decline of Puget Sound orcas.

“I am writing to thank for your leadership and initiative to restore health to our iconic orcas,” Brown told Inslee, “and to share with you my perspective on long-term and interim steps necessary to support that effort. The imperilment of Southern Resident Killer Whales is a tragedy shared by all of us in the Pacific Northwest and Oregon stands with you to boldly address those factors contributing to their demise.”

Brown said Oregon’s primary opportunity to assist in these efforts is to enhance the availability of salmon to foraging orcas.

“The recent draft report from your task force Lower Snake Dams Engagement Report provides a good context for sharing my perspective on long-term and interim steps to enhance the availability of salmon to foraging orcas.,” she said.

Brown contends that removing the four lower Snake River dams “would likely provide a dramatic increase in salmon available for orca forage, particularly during the late winter when vulnerable gestating orcas may be foraging off the mouth of the Columbia River. This option reduces the direct and delayed mortality of wild and hatchery salmon associated with dam and reservoir passage and provides the most resilience to climate change (e.g., reduced thermal loading in the lower Snake and Columbia rivers and better access to and from the alpine headwaters most resilient to shrinking snowpacks).”

Brown’s letter and her views on dam removal come just as federal dam operating agencies, under a federal court order, are evaluating the dams’ removal and the resulting impacts to commerce, agriculture, navigation, power generation, municipalities and threatened and endangered salmon and steelhead.

A Columbia River System Operations (www.crso.info) draft environmental impact statement is due this month from the U.S. Army Corps of Engineers, the Bonneville Power Administration and the Bureau of Reclamation.

While Brown stressed that dam removal is a long-term solution, “In the interim, I believe there are two important actions that we can take together to address immediate needs of orcas and salmon. First, the Flexible Spill and Power Agreement that we both signed can provide the foundation for an effective bridge to a long-term solution for salmon that also preserves the hydropower system as an important tool in meeting our carbon objectives.”

“Hopefully we can work together to improve on that agreement, which will enhance survival of juvenile wild and hatchery salmon which translate into additional orca forage only two years later,” she said.

“Oregon has capacity to increase interim hatchery production of salmon important for orca forage. This increased production must be focused in areas with low ecological risk to existing wild salmon populations, such as lower Columbia River off-channel areas and other areas outside the range of historical natural production areas.

“In recognition of this urgent need for orca forage, Oregon already has fish in the queue that could be available to orcas as soon as 2021. I would like to partner with you to help ensure this initiative is fully funded and sustainable during the necessary interim period while long-term solutions are addressed.”

“We share Governor Brown’s passion for the recovery of the three southern resident orca pods that frequent Puget Sound, and the Snake River salmon runs that make up a portion of those orcas’ diet. But the timing of the governor’s letter is surprising. The federal agencies that operate the lower Snake River dams and others in the Columbia Basin are currently conducting a comprehensive science-based evaluation of salmon and the river system, and will issue a draft report and recommendations at the end of February. That report is being developed in collaboration with and input from a variety of Oregon and Washington state agencies,” said PNWA Executive Director Kristin Meira.

“The States of Oregon and Washington, like all other partners and stakeholders of these federal projects, will have an opportunity to review and provide feedback on the draft environmental impact statement in just a few weeks. Indeed, Governor Inslee’s office commissioned a $750,000 stakeholder engagement process to inform his review and feedback. It is surprising to see a letter of this nature, expressing a position for the State of Oregon for an extreme approach on the river system, prior to the release of the federal agencies’ proposed operations,” Meira said.

“PNWA is also concerned about the scientifically inaccurate information in the letter. Its portrayal of the role and importance of the lower Snake River dams in the survival of the southern resident orcas is at odds with information available from NOAA Fisheries, the federal agency responsible for the recovery of both orcas and Chinook salmon,” Meira said.

“The lower Snake River dams are federal projects. Since their construction in the 1960s and 1970s, every presidential administration and every Congress has recognized the immense benefits to the region those projects provide, and funded their continued operation accordingly and without interruption,” Meira said.

“Gov. Brown’s position is not only misguided, it is shocking and extreme,” said Reps. Dan Newhouse, Cathy McMorris Rodgers and Jaime Herrera Beutler, in a joint statement.

The three said it is best to wait for the release of the court-ordered draft EIS evaluating the dams’ removal.