Atmos Magazine: The Frontline - To Our Relatives in the Water

Across the Pacific Northwest, many tribal nations see the salmon and orcas as relatives, but recent heat waves are challenging the ability for them to survive. The Frontline examines efforts to save these endangered species and their cultural significance. 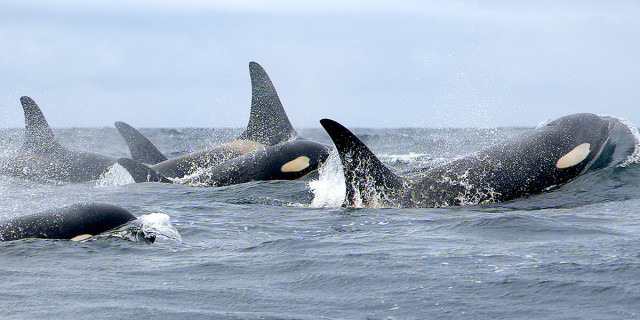 Many rivers along the Pacific Northwest coast eventually empty out into the ocean. These are the waters several communities of orcas call home, including the Southern Resident killer whales. And the rivers are what give them life because of the chinook salmon that spawn in them. You see, these orcas eat almost exclusively chinook salmon year-round. A study earlier this year found that the fish make up the vast majority of the orca’s diet—and both are at risk of extinction.

The heat waves that keep rocking the West are only exacerbating a delicate situation. Fifteen tribal nations came together earlier this month to advocate for the orcas and salmon. There, they made their hope clear: The clearest way forward in protecting these species is to remove dams that block critical habitat in the Northwest’s Columbia River Basin. Whether that happens may bank on President Joe Biden’s infrastructure package. Dam removal ain’t cheap.

Welcome to The Frontline, where animals matter, too. I’m Yessenia Funes, climate editor of Atmos. The weather has been relentless in the West. It started in June with a record-breaking heat wave and continues. This week will be the fourth heat wave in five weeks, the Washington Post reports. These temperatures are unprecedented for the Pacific Northwest—and a terrifying glimpse of what’s to come as the climate continues to change.

As Misty MacDuffee sat sweating before her computer in British Columbia, Canada, during last month’s historic heat wave, reality struck her: “This is it. This is insane,” thought the biologist and program director of the Raincoast Conservation Foundation’s wild salmon program. She was reading temperature maps, receiving heat alerts, and following the temperature spikes throughout the globe. After her dog, her mind immediately went to another animal: the salmon.

Chinook salmon prefer the cold; they need it to survive. Such unprecedented heat is deadly for them. Without sufficient chinook in the years to come, the Southern Resident orcas may suffer—and so will the Salish Sea people who call them relatives.

“All of our past decision making is really coming home to haunt us now,” MacDuffee said, speaking of the government failure to address greenhouse gas emissions and the environmental degradation in British Columbia.

The science suggests salmon can only withstand water temperatures up to around 71.6 degrees Fahrenheit (22 degrees Celsius) before their bodies begin to fail, MacDuffee said. You see, the cold water carries more oxygen. And salmon require plenty of oxygen to complete their thousands-mile long journeys to their birthplace to spawn their young.

That’s bad news for the Southern Resident orcas, which are the only endangered species of killer whale in the U.S. They swim along the waters from central California up to southeast Alaska, but toxic contaminants, shipping vessels, and food shortages are threatening their very survival. Only 75 of these majestic creatures remain today. And they won’t eat much else besides chinook salmon.

All 14 runs of chinook salmon (one of which dwells in the Sacramento River) have some level of federal protection due to their threatened nature. They’re the largest species of Pacific salmon. That’s why the Southern Resident orcas love them so much, MacDuffee said. The fish were large enough to split among the family.

“Their culture is to share those fish,” she said

But chinook have been shrinking over the last century, in part, because they aren’t living as long. Overfishing, habitat loss, and dams have all contributed to the chinook’s downfall. So not only are there fewer fish in the ocean—they’re smaller, too. Without enough food to eat, the orcas become more vulnerable to everything else stressing their bodies: legacy ocean contaminants and noise from ships. The loss of this year’s salmon runs may hurt the fish—and the orcas—for years to come, said Michael Weiss, a postdoctoral researcher at the University of Exeter and biologist with the Center for Whale Research.

“Births and survival [of orcas] are really strongly correlated with the annual abundance of chinook salmon,” Weiss said.

That’s why tribal nations from across the Pacific Northwest are partnering with government officials on a plan to save these sea creatures. From July 7 to 8, 15 nations gathered on the Squaxin Island Reservation along Puget Sound for the first-ever Salmon Orca Summit. These Salish Sea tribes have long depended on the salmon for food, sustenance, and culture. The way many see it, “the orca are the first people of this place,” Lynda Mapes of the Seattle Times reported. And all relatives—from tribal members to their finned kin—are suffering without the salmon.

Tribal nations want to immediately see policymakers take steps to remove four dams from the lower Snake River, the nation’s fourth-largest river and a tributary of the Columbia River. This ecosystem is a “salmon sanctuary,” said Bill Arthur, who chairs the Snake-Columbia River Salmon Recovery Campaign with the Sierra Club. That’s because the river cuts through higher elevations in this corner where Washington, Idaho, and Oregon meet. The water is naturally cooler, which will help protect the salmon as global heating makes other areas uninhabitable for them.

Idaho Rep. Mike Simpson released a $33 billion proposal earlier this year to remove the dams and find alternatives for the energy and irrigation they currently provide. The president’s infrastructure package could help fund such an expensive project, but he’s struggling to build support from Republicans. Having Simpson on board could help build a case for dam removal with or without Biden’s $3.5 trillion infrastructure bill—but it won’t be easy.

“That was huge,” Arthur said, speaking to Simpson’s support.

Unfortunately, little will save the salmon or the orcas if leaders don’t take climate action seriously. Dam removals would help buy leaders some time until they figure out how to address the planet’s rising temperatures. They won’t save these species—and their cultural significance to Salish Sea tribes—on their own.

“It’s not just trying to fix what we’ve damaged,” said Deborah Giles, a killer whale researcher with the University of Washington’s Center for Conservation Biology and research director of Wild Orca, a nonprofit dedicated to saving the Southern Resident orcas. “It’s a matter of being proactive in limiting our carbon footprint right now and into the future.”