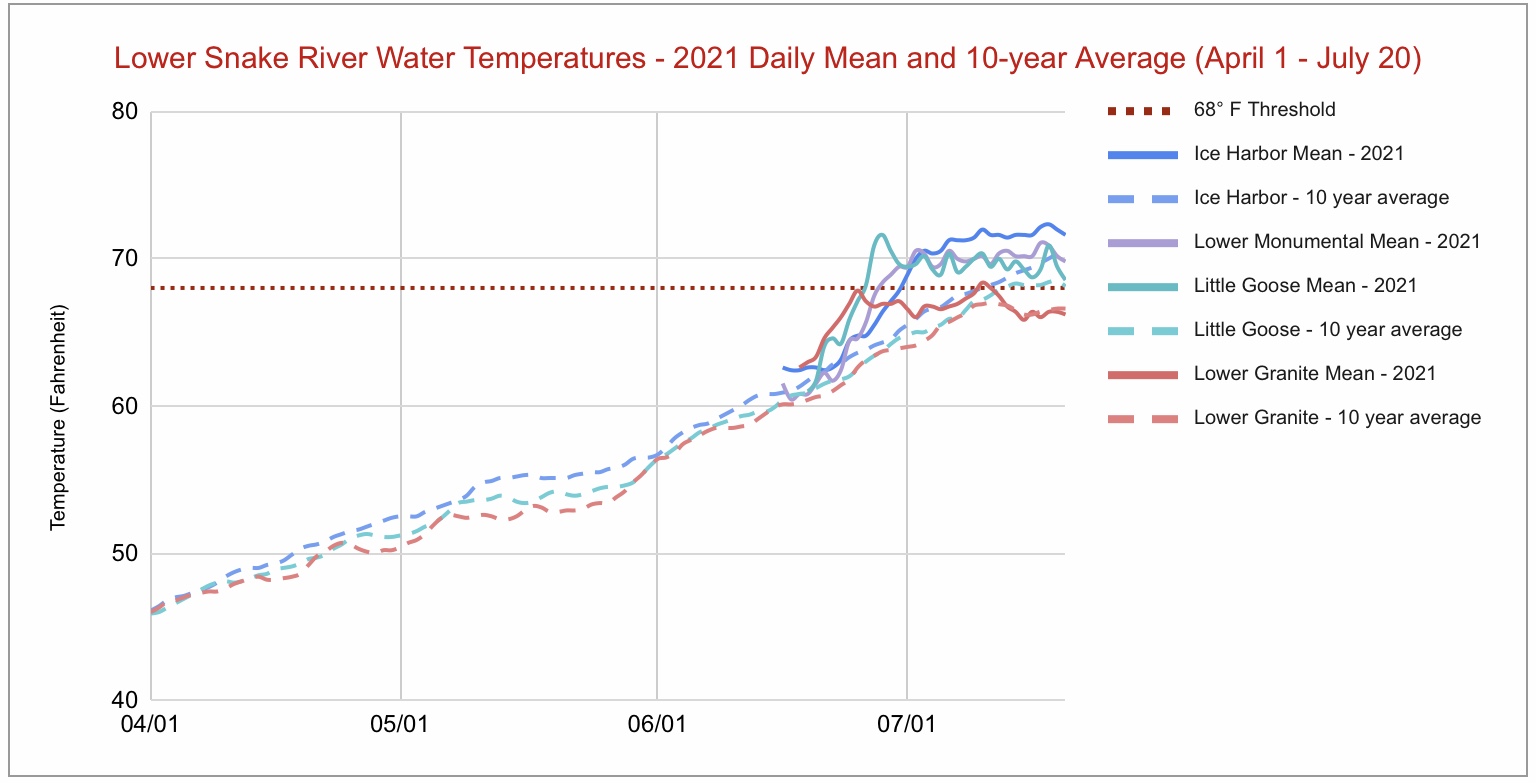 Water temperatures remain high - and harmful to salmon and steelhead - in the lower Snake and lower Columbia River reservoirs: On the lower Snake River, the Ice Harbor, Lower Monumental, and Little Goose reservoirs have all peaked over the threshold (68 degrees) this week. The Ice Harbor Dam has consistently maintained mean temperatures above 71°F, and with a high mean temperature of 72.32°F on July 18, 2021. The Lower Monumental Dam had high mean temperatures of 71.06°F on July 17, 2021. This week, the Lower Granite reservoir is the only one with water temperatures below the 68°F threshold. Temperatures in Lower Granite’s reservoir in the summer months are typically slightly cooler than the three downstream reservoirs on the lower Snake because the U.S. Army Corps of Engineers traditionally releases cold water from the Dworshak Dam (just upstream into the Clearwater River) in July and August. However, this year, due to the extreme heatwave in the Pacific Northwest, the Army Corps began to release “43-degree Fahrenheit (6-degree Celsius) water from Dworshak Dam on June 22. These releases are continuing in July and are helping to prevent the water temperature from reaching 68 degrees Fahrenheit in the Lower Granite Dam reservoir near Lewiston (ID) and Clarkston (WA). Despite these cold water releases from Dworshak reservoir this summer, all reservoirs downstream from Lower Granite Dam continue to experience temperatures above 68°F. As long as these four dams remain in place, the benefits of Dworshak’s cold flows are limited and serve only as a short-term solution to cooling water behind Lower Granite Dam. EPA models show that a freely flowing lower Snake would carry these cooler waters all the way downstream to its confluence with the Columbia River near the Tri-Cities (WA) (see Issue 2 for more information). 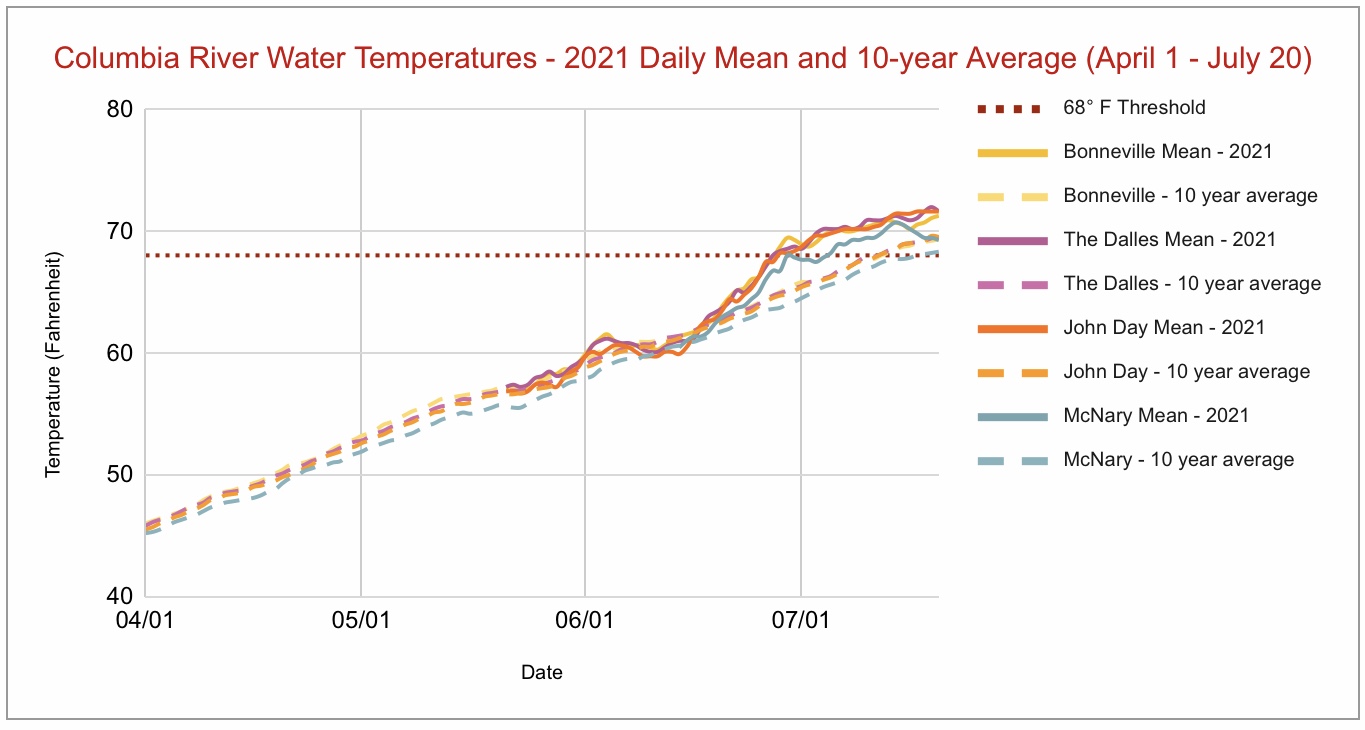 On the lower Columbia River, all reservoirs registered high temperatures above 69°F for multiple days. The Dalles Dam had the highest temperature this week at 72.32°F, followed closely by the John Day Dam with a high temperature of 71.96°F.

On July 16, 2021, Earthjustice representing the National Wildlife Federation, American Rivers, Idaho Rivers United, Institute for Fisheries Resources, NW Energy Coalition, Northwest Sportfishing Industry Association, Pacific Coast Federation of Fishermen’s Associations, Sierra Club, Columbia Riverkeeper, Idaho Conservation League, and Fly Fishers International as plaintiffs, requested a motion for a preliminary injunction against the U.S. Army Corps of Engineers to address violations of the Endangered Species Act.1 The plaintiffs are asking the U.S. District Court in Portland to order the federal dam agencies to implment specific changes (i.e. "injunctive relief") to how the dams are managed and operated starting in 2022 in order to “reduce irreparable harm to, and increase the survival of, Endangered Species Act-listed salmon and steelhead in the Columbia and Snake Rivers.”1

This latest round of litigation is challenging the Trump Administration’s 2020 Record of Decision for Columbia River dam operations and the U.S. Army Corps of Engineers’ reliance on the 2020 Biological Opinion (Federal Salmon Plan) for the Federal Columbia River Power System.1 The State of Oregon has also filed a similar motion for injunctive relief and with the support of the Nez Perce Tribe.2

To “reduce irreparable harm” to salmon and steelhead, the plaintiffs are asking the Court to require the Army Corps of Engineers to:

In summary, conservation and fishing plaintiffs seek increased spill starting next spring (2022) to help endangered salmon and steelhead populations navigate the federal dams and reservoirs in the lower Columbia and Snake rivers.2 Spill sends water and fish over the tops of dams - rather than through power turbines or dam bypass systems that increase fish mortality. Years of scientific study demonstrate that spill increases the survival of out-migrating juvenile fish, reduces mortality, and leads to increased adult returns in the years that follow.

Similarly, restoring spill during the entire summer migration season will help to “preserve as much of the diversity of summer migrating juveniles as possible, limit harm to them, and increase their resilience in the future.”1 The voluntary spill from September 1 to the beginning of the following spring spill season will support the migration of late and early juveniles and serve benefits to Endangered Species Act-listed adult steelhead in the Columbia and Snake River basins that otherwise experienced harm by the limited spill.1

The plaintiffs also seek “drawdown” (lowered reservoir levels) to help speed fish migration through reservoirs with hot water temperatures. Science confirms that lowering reservoir levels “increases the speed with which water moves through the reservoirs.”1 A faster current reduces the amount of time required for juvenile salmon to pass through the reservoirs and can also reduce water temperatures in these reservoirs to some extent, and increases the survival rates for endangered juvenile salmon and steelhead.1 The faster juvenile salmon and steelhead pass through a reservoir, the greater the chance to avoid predators like bass and pikeminnow, whose populations have increased significantly due to the large warm, stagnant waters created by the dams.

For Snake River fish that must pass through eight dams and reservoirs to get to and from the ocean, spill and the lowered reservoir levels has the potential to significantly increase survival rates. As we have seen, temporary and short-term solutions like the release of “43-degree Fahrenheit (6-degree Celsius) water at Dworshak Dam” has helped to prevent the water temperature from reaching 68 degrees Fahrenheit and higher. Specifically, this week, we have seen consistent temperatures of 66°F - 67°F at the Lower Granite Dam’s reservoir.

Spill and reservoir drawdown are two methods that help aid the migration of endangered salmon and steelhead and increase their survival in the near-term. However, the best available science strongly supports lower Snake River dam removal as necessary to protect these populations from extinction and restore them to abundance. The plaintiffs view the requested injunction as “an emergency stop-gap measure and not enough alone to prevent extinction.”2 A reservoir-free lower Snake River will deliver considerably cooler waters, restored spawning and rearing and migrating habitats - and big benefits to migrating juvenile and adult salmon and steelhead populations that will lead to increased survival and reproductive success.