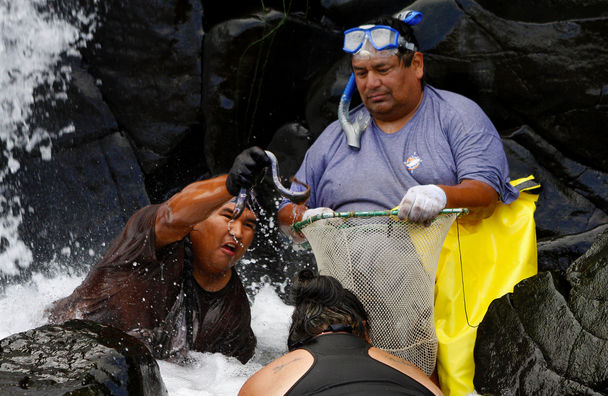 The first few phases of a long-range plan by tribes to restore Pacific lamprey runs into Columbia River tributaries through artificial propagation and translocation was given a tentative approval this week by the Fish and Wildlife Committee of the Northwest Power and Conservation Council.

However, given the uncertainty of Bonneville Power Administration funding and whether the Columbia River Fish Accords will be extended beyond 2018, the Committee at its meeting in Missoula, Montana, Tuesday, July 10, approved the first couple of implementation phases of the lamprey Master Plan, but sent the tribes back to the drawing board to determine the actual costs of such a restoration effort.

The Yakama Nation and the Confederated Tribes of the Umatilla Indian Reservation want to implement the first steps of the Master Plan for lamprey – Pacific Lamprey Artificial Propagation, Translocation, Restoration and Research Plan – that will cost between $100,000 and $200,000 per year through fiscal year 2021, according to the Council’s Mark Fritsch. Also involved with the lamprey master plan are the Nez Perce Tribe and the Columbia River Inter-Tribal Fish Commission.

Initially, the tribes are seeking a three-year commitment of money to begin Master Plan implementation, Fritsch said. He said the Council should recommend to the Bonneville Power Administration to fund the program through Phase 3, Objective 5 for FY2019 – 2021. The project already is funded in FY2018.

Idaho Council member Bill Booth said that before final approval at the Council level, funding for the Master Plan implementation must be resolved.

“If we don’t address the funding issue when we move this to the full Council, they won’t approve it,” Booth said.

The Master Plan received a qualified approval from the Independent Scientific Review Panel in March, which said it meets scientific review criteria, but added six qualifications, including providing more information on the tribes’ supplementation strategy that will be addressed in the first two phases of the project, said Brian McIlraith, Pacific lamprey project lead with CRITFC.

The translocation strategy collects adult lamprey from downstream in the Columbia River and transports them upstream, helping the lamprey “avoid the difficult migration channel” upriver through dams on the river. Translocation has been used by the tribes since the early 2000s, McIlraith said.

Artificial propagation is the other strategy and the Master Plan is focused on hatcheries, he said.

The most important aspects of the plan are to continue translocation and to develop and implement artificial propagation as a component of a regional research and supplementation plan. Ultimately, McIlraith said, the Tribes want to restore lamprey to its historical geographic range.

Phase 1 is largely done in the laboratory, or in hatcheries, and has already begun with phase 1 beginning in 2012 and ending in 2020.

Phase 2 is the field phase, Brian said, taking lamprey from the laboratory and strategically releasing them and monitoring the outcome. This phase began this year and will conclude in 2026.

Phase 3 is the synthesis phase when the tribes will evaluate supplementation results to determine the most successful strategies and develop new strategies as needed. This phase is 2022 through 2029.

Phase 4 is the implementation phase that begins in 2027.

The Yakama Nation and the Umatilla Tribe are doing complementary work, Brian said.

For the Yakama Nation, adult translocation will continue into the lower Yakima and Methow subbasins, while they will focus artificial propagation research in the upper Yakima and Naches watersheds.

The Umatilla Tribe will continue translocation into the Umatilla and Grande Ronde subbasins and will release larvae/juveniles in watersheds within the Walla Walla and Tucannon subbasins over the next ten years.

The Yakama’s have established the capacity to spawn, fertilize, incubate and rear lamprey at the Marion Drain Fish Hatchery and at the Prosser Fish Hatchery.

Also, the Umatilla Tribe has developed hatchery capacity at the Water and Environmental Center at Walla Walla Community College and at the Mukilteo Research Station, owned by NOAA Fisheries, and plans an expansion at a South Fork Walla Walla facility.