Corps proposes to fill cove on the Clarkston side of the Snake to increase user access, reduce need to dredge 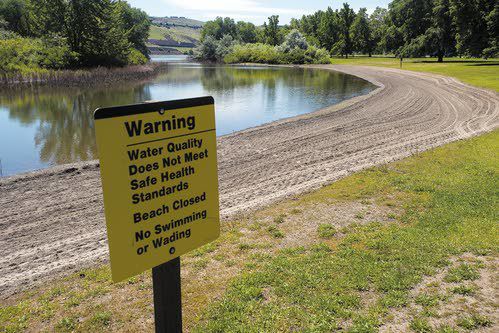 Officials from the Army Corps of Engineers are looking to add a new beach at Swallows Park near Clarkston and convert the long-abandoned swimming area there to native vegetation.

The plans are included in the agency's draft update of its 1974 Lower Granite Master Plan. The document spells out how the Corps' land-based resources, including high-density recreation areas and wildlife habitat that are part of the Lower Granite Dam project, will be managed.

The dam is on the Snake River, about 35 miles downriver from the Lewiston-Clarkston Valley. But the project includes things like the levee system that keeps Lewiston and Clarkston from flooding, as well as undeveloped land such as the Hells Gate and Chief Timothy habitat management units that are dedicated to mitigating for habitat that was inundated when the dam backed up the Snake River. The levee system includes developed recreation such as the walking and biking paths that sit on top of it and adjacent parks like Swallows, south of Clarkston.

A swimming beach there was essentially abandoned years ago after the agency could no longer afford to dredge sediment from the area. It's in a small cove off the main river, just north of the boat ramp at the park that sits in a separate and larger lagoon. Today, the crescent-shaped cove consists of a shallow backwater area with a river inlet on its south end and a marshy low-lying area on the north end with an island-like area between the two. Agency officials plan to fill in the cove, plant native vegetation and establish a new beach along the shore of the river on the north end of the island.
The federal agency must obtain a clean water permit from the Washington Department of Ecology before the plan is finalized.
"Instead of dredging it out, it will be easier to fill it in and establish a beach in a new area that won't require as much dredging or maintenance costs," said Chris Alford, senior natural resources specialist for the Corps at Walla Walla.

He said the new beach would be similar in size and look to Chestnut Beach in Clarkston. Alford hopes the project can begin by the end of summer.
Elsewhere in the document, agency officials detail aspirations to better connect the levee trail system with the downtowns of Lewiston and Clarkston. However, specific funding and plans are not yet in place. It also reclassified several parcels of wildlife land to mitigation land, a technical change with no real difference in how the land will be managed said Karen Zelch, project manager for the effort to update the document.

The plan includes concerns from some users at the Hells Gate Management Unit that hunting there may be a safety hazard for people who use the land for hiking, horse riding and biking. The area is mitigation land with a stated purpose of providing both wildlife habitat and hunting access. The plan's authors don't propose changing use in the area but speak of working with user groups to make sure hunting and other uses can coexist.

"We are trying to balance those uses between it being more of a recreation area in a lot of people's eyes but still one of those mitigation areas we manage for wildlife, including hunting," Alford said.

The draft plan is available on the Corps' website at https://bit.ly/2kXfVjL and available for public comment through June 26. Written comments may be submitted via email at LowerGraniteMP@usace.army.mil, by using the online comment form on the master plan webpage or by post to USACE-Walla Walla District.