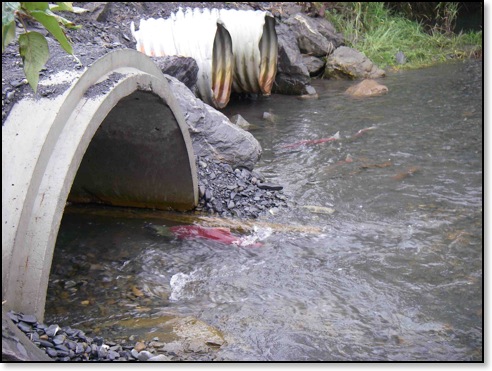 Without offering an explanatory opinion, the U.S. Supreme Court handed down a tie vote Monday affirming the position of Washington Indian tribes in a lengthy litigation series requiring the state to modify road culverts that block salmon passage.

The decision was hailed by the tribes, and it was met with acceptance from top Washington political leaders.

“This Supreme Court ruling means more salmon for everyone,” declared Lorraine Loomis, chair of the Northwest Indian Fisheries Commission. “It will open hundreds of miles of high-quality salmon habitat that will produce hundreds of thousands more salmon annually for harvest by Indians and non-Indians.”

Loomis said it was a “common-sense ruling that treaty rights require there to be fish available for harvest. It affirms that the state can’t needlessly block streams and destroy salmon runs.”

She said the ruling confirms “that our treaties are living documents. They are just as valid today as the day they were signed” by the tribes and Territorial Governor Isaac Stevens in 1854-1855.

Washington Gov. Jay Inslee, a Democrat, commented on Twitter, saying the “ruling offers the parties finality in this long-running case. For some time now I’ve hoped that instead of litigation we could focus together on our ongoing work to restore salmon habitat.”

Washington Commissioner of Public Lands Hilary Franz said the ruling “affirms that it is our collective responsibility to ensure survival of Pacific salmon. This decision is fair under the letter of the law, but it is also just. Protecting salmon is an issue not just of importance to Washington’s tribes, but to all of us.”

Franz pledged that her agency, the state Department of Natural Resources, “stands ready to work with tribes, state agencies, counties, private landowners and federal partners to restore and protect our treasured salmon.”

Franz noted she wrote to Washington Attorney General Bob Ferguson last August urging him not to appeal the case to the Supreme Court. Ferguson pursued the appeal, and he also commented on this week’s ruling.

“It is unfortunate that Washington state taxpayers will be shouldering all the responsibility for the federal government’s faulty culvert design. The Legislature has a big responsibility in front of it to ensure the state meets its obligation under the court’s ruling. It’s also time for others to step up in order to make this a positive meaningful ruling for salmon. Salmon cannot reach many state culverts because they are blocked by culverts owned by others.”

He noted that King County alone owns several thousand more culverts than are contained in the entire state highway system, and the federal government owns even more in the state.

SCOTUSblog.com offered an analysis of the case, pointing out how the lack of an explanatory opinion is significant.

The analysis explains that the tie 4-4 vote could only come about because Justice Anthony Kennedy recused himself due to his involvement in an earlier phase of the case, more than 30 years ago, as a judge on the Ninth Circuit Court of Appeals.

The effect of the vote was to affirm a 2013 District Court ruling and a Ninth Circuit decision supporting that ruling, which amounted to an injunction requiring Washington to modify road culverts that obstruct salmon passage within 17 years. The state objected, claiming that a $2 billion disputed price tag would be excessive and state culvert improvements would be ineffective on waters where there are also salmon barriers on federal and private lands.

But the Ninth Circuit’s review did not support those arguments.

“The Ninth Circuit also indicated that the tribal fishing right conferred on the state an obligation to protect fish, rather than just to allow the tribes a share of otherwise available fish. In their briefs before the Supreme Court, both sides vigorously disputed both the scope of the treaty right and the principles governing equitable remedies like the injunction at issue here,” the analysis states.

“The absence of an opinion means, of course, that the court did not clear up these broader disputes. It also means we do not know how each justice voted. Given the case’s cross-cutting currents — of federalism, judicial remedies, environmentalism and more — it is not obvious that the justices divided along the lines that are sometimes regarded as predictable.

“And, finally, it is not clear exactly how much yesterday’s ruling will help the salmon population overall. Rather, the effect of the ruling is more limited: It seems to close the door on this phase of a long-running dispute, and by doing so, at least open doors (or culverts) to increased fish passage in the state of Washington.”

For the tribal plaintiffs, the heart of the case filed back in 2001 has been asserting treaty fishing rights that were established in the mid-1800s under Stevens treaties, named for the territorial governor at the time. The tribes ceded millions of acres of land but reserved the right to fish traditional waters. That right was first affirmed by U.S. District Judge George Boldt in 1974, and the culvert case is a direct descendant of the so-called “Boldt decision.” U.S. District Judge Ricardo Martinez ruled in 2007 that the tribal fishing right includes the right to have salmon and their habitat protected, and in 2013, Martinez issued a ruling requiring the state to remove or improve 450 of 800 culverts that are the biggest impediment to salmon passage and to do so within 17 years.