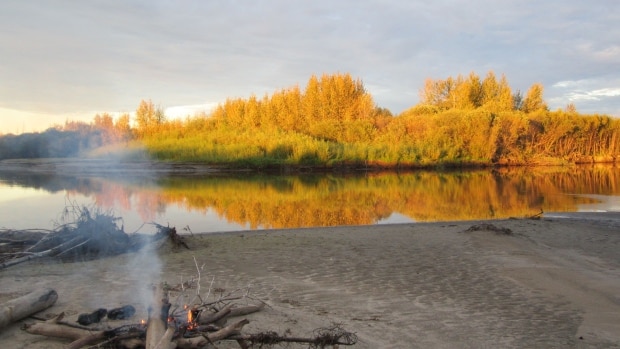 A coalition of 14 First Nations and Metis communities in Alberta and the Northwest Territories called on B.C. Premier John Horgan to cancel the Site C dam on the same day provincial cabinet ministers consulted with energy experts to help decide the fate of the controversial project.

"History has shown that downstream indigenous communities bear enormous costs when BC Hydro puts the Peace River and downstream waters at risk," the signatories of an open letter to Horgan write.

"For generations, we have witnessed negative changes to our lands, waters and resources from BC Hydro's regulations of the Peace River."

The Peace River, which is already host to the W.A.C. Bennet Dam and Peace Canyon Dam, flows northeastward from B.C. into Alberta, ultimately connecting to the Mackenzie River in the N.W.T.

Dams on the Peace River in B.C. and tar sands in Alberta threaten the health of Wood Buffalo National park, says UNESCO. (UNESCO) Both the United Nations agency UNESCO and the International Union for the Conservation of Nature have raised alarms about the impact existing hydroelectric projects on the Peace River in B.C. have had on Alberta's Wood Buffalo National Park.

In July 2017, UNESCO warned the health of Wood Buffalo, which is Canada's largest national park, was being threatened by industrial developments, including existing dams in B.C. Among its 17 recommendations was a directive for the government of Canada to conduct "an environmental and social impact assessment of the Site C project."

UN committee directs Canada to protect Wood Buffalo National Park — or else
In a response to UNESCO concerns, BC Hydro said it had "commissioned studies from leading experts to evaluate the potential downstream effects of Site C. In all cases, the studies concluded that the project would have no notable impact."

However, the letter signatories write, "As indigenous communities located downstream of the Site C project, we are deeply concerned that our rights and cultures are threatened by Site C."
Independent experts meeting with cabinet

The letter was sent the same day Horgan and B.C. cabinet ministers were meeting with a group of independent experts to discuss the possibility of alternatives to the Site C dam project.
Horgan said the goal of the meeting was to hear more about the "disruptive technologies, and new innovative ways to generate electricity."

The construction of Site C would flood 5,500 hectares of the Peace River Valley and provide energy to power the equivalent of around 500,000 homes. At last count, its construction employed roughly 2,000 people. (Jonathon Hayward/The Canadian Press)

A report from the independent B.C. Utilities Commission did not recommend whether Site C should proceed or be cancelled, but did suggest alternative forms of energy such as wind and geothermal could meet the province's electricity needs while costing the same or less than completing its construction.

The NDP government has committed to deciding on the project's future by the end of 2017.

Read the full article and letter from the 14 Indigenous communities to Premier Horgan here:
http://www.cbc.ca/news/canada/british-columbia/site-c-mackenzie-basin-delta-indigenous-communities-1.4427481