Investing in the Salmon Economy

Not long ago, when populations were healthier, Columbia and Snake River salmon and steelhead supported directly and indirectly tens of thousands of jobs across the western United States. These jobs connect to commercial, recreational and tribal fishing, and the manufacturing, gear, and services that support them. In the 1980s, the west coast commercial and recreational industries employed tens of thousands and generated billions of dollars annually.

Today, as a result of the severe salmon declines from dams and habitat destruction, fishing opportunities are severely restricted and coastal and river communities are struggling to survive. With smart investments in restoration like the removal of the four lower Snake River dams, we can boost the regional economy and provide lasting solutions to maintain the Northwest’s unique way of life and promote a clean energy future.

"The bottom line is clear. The financial cost of maintaining and operating these dams far outweigh their benefits." - David Jenkins, Republicans for Environmental Protection 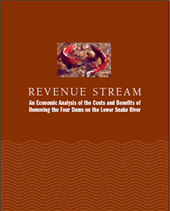 A recent study, called Revenue Stream, indicates that lower Snake River dam removal can actually save taxpayers billions of dollars and boost the regional economy.  The study shows that energy, transportation and irrigation benefits can be replaced cost-effectively as part of salmon recovery plan.

Revenue Stream examines the economic impact of dam removal and salmon recovery in the Pacific Northwest. In addition to taxpayer savings of up to $5 billion, the study finds that increased tourism, new outdoor recreation, and improved sport and commercial fishing opportunities could generate more than $20 billion in revenue for the region.

More on Revenue Stream HERE or Download the PDF

Why should U.S. taxpayers be concerned with salmon restoration in the Columbia and Snake River basin 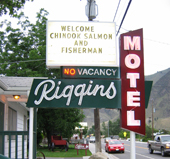 A study released on February 8, 2005 The Potential Economic Impact of Restored Salmon and Steelhead Fishing in Idaho concludes that a restored salmon and steelhead fishery would bring almost $550 million every year to Idaho's economy.

In 2001 a limited fishery gave Idaho's rural river communities a taste of what true restoration could bring. With only 42 river miles open to fishing, where more than a thousand were once crammed with salmon, Idaho brought in $90 million. A restored fishery, abundant harvestable populations of salmon, that is, would be a 170 percent increase on those numbers, the study reports.

Extrapolating that same increase to the 2001 fishing season impacts of Oregon and Washington would mean than salmon and steelhead sportfishing could bring in more than $5.5 billion per year to the Northwest. Business leaders say that even half that number would bring an economic boom to river and rural towns and a large increase in jobs to the Northwest.

The full study is available as a PDF download, but here are some highlights:

This astounding economic benefit to the region is from salmon and steelhead sportfishing alone. Tribal and commercial fishing impacts have not yet been studied in the same way so the numbers are not comparable. However, on the commercial side, the Pacific Fishery Management Council estimated that personal income in coastal communities in 2001 was nearly triple the average for the previous five years. This was due almost exclusively to stronger salmon runs. Even without restored runs the Pacific Coast salmon fishing industry was still estimated in 1988 to be worth at least $1.25 billion to the Northwest's economy, supporting tens of thousands of jobs.

Why should U.S. taxpayers be concerned with salmon restoration in the Columbia and Snake River basin?

Over the last two decades, federal agencies have spent more than $8 billion in failed attempts to restore Columbia and Snake River salmon.  Each year more than $550 million in funding, more than twice that of even Everglades restoration, goes to NOAA Fisheries, the Army Corps of Engineers and other federal agencies for this effort. This money has been spent on ridiculous schemes such as loading salmon into trucks and driving them around the dams, all the while ignoring cost-effective solutions for recovery like partial removal of the lower Snake River dams.

In 2002, the General Accountability Office, the investigative arm of Congress, released a report titled, “Columbia River Basin Salmon and Steelhead: Federal Agencies' Recovery Responsibilities, Expenditures and Actions” that stated there is no conclusive evidence that the last two decades of federal salmon recovery actions have succeeded in helping to restore these fish.

If we stay on the current path, taxpayers will not only continue to foot the bill for costly salmon recovery but will shoulder the massive cost of extinction.  Columbia and Snake River salmon are protected under treaties with the Columbia Basin treaty tribes and Canada.  Taxpayers could be liable for billions to tens of billions of dollars in compensation payments to treaty tribes and Canada if the fish go extinct.

The current recovery plan is too expensive and promises not fish recovery, but decades more in multi-billion dollar spending.  If we continue with the status quo, salmon will be driven to extinction and U.S. taxpayers will be left with an enormous price tag.  Congress can make lower Snake River dam removal the cornerstone of a recovery plan that begins to reign in the federal agencies’ spending cycle that is ineffective and out of control.